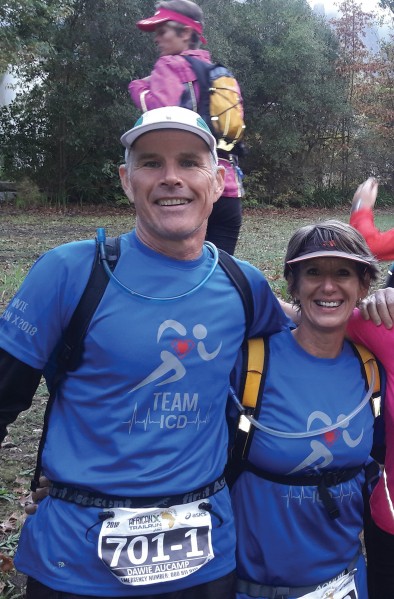 Dawie Aucamp has been running for 26 years, but the last few years have been really challenging after he suffered a heart attack while out training… even though he didn’t know that until 12 hours later! After many operations and having an Implantable Cardio Defibrillator (ICD) implanted, he’s not only returned to marathons and ultras, but also done his first Ironman. – BY SEAN FALCONER

The troubles started in November 2010. Around the 32km mark of the Winelands Marathon, Dawie felt pain in his chest, experienced white vision and couldn’t breathe, so he pulled off the road. Eventually he began feeling better, so he slowly carried on and made it to the finish. Then it happened again 16km into the Dangerpoint Half Marathon that December. “I thought it was just blood pressure, because I was fine in the Bay to Bay 30km in January, but later that month, the same thing happened 30km into the Red Hill Marathon. I had to put my hand on my wife Annalita’s shoulder to balance, but again I recovered and finished the race. Then it happened again at 30km in the Peninsula Marathon!” says the 56-year-old finance manager from Stellenbosch.

The next day he called his doctor, who ran tests but couldn’t find anything wrong, partly due to Dawie being so fit that he was unable to get his heart rate high enough on the exercise bike to really stress it. That saw Dawie referred to cardiologist Dr Wouter Basson, who ran more tests and prescribed blood pressure tablets. “That worked for a few years, but I was still tired in the legs and would finish races totally exhausted.”

Fast forward to 2015 and Dawie was running his 11th Two Oceans Ultra when a friend passed him at 30km and said he didn’t look good. “I replied that I was going to bail if a bus came past, but none did, so I finished in 6:18. Then at Comrades the same thing happened – around 35km in I told Annalita to go, because I was holding her back, and after a lot of tears she eventually did. I recovered after a while and finished in 10:44, but I was getting worried.”

Then on 9 August, he experienced problems again during a long training run. “I struggled home, but started vomiting and shivering, and my stomach was upset. Annalita found me sitting in the shower under hot water, so helped me get into bed to try rest, but I had no circulation in my extremities, and I kept vomiting, so when she came home later from a Women’s Day function, I said I think we should go to hospital. The doctors gave me one look and booked me in for emergency treatment. It took three shocks to get my heart back to normal rhythm, and they told me I had suffered a heart attack.”

LUCKY ESCAPE
The following day he was visited in ICU by Dr Basson and specialist Dr Rust Theron, who told him the troponin count in his blood was 37,000. A raised troponin level indicates cardiac muscle cell death, and a normal count should have been 40! “Dr Theron still said, ‘You’re somebody’s favourite up there.’ I was in ICU for four days, and three weeks later Wouter diagnosed Super-ventricular Tachycardia in the top chamber of the heart. He said I could start training three weeks later if I kept my heart rate under 130, and in my first run everything was fine. However, the next evening my heart went off the chart, so it was back to Wouter. And yet, the angiogram showed nothing wrong, so he sent me to physiological cardiologist Dr Razeen Gopal, who took one look at my charts and said I’m going nowhere. He also promised me, ‘I am going to give you your life back’.”

In October 2015 Dr Gopal diagnosed Ventricular Tachycardia of the bottom chamber of the heart, inserted the ICD in Dawie’s chest, and did a cardiac ablation to scar the tissue in his heart that was allowing incorrect signals to cause an abnormal rhythm. After being discharged, Dawie was told to rest – no running until February 2016 – and he admits that his first comeback jog with Annalita was very frightening, but he came through it OK. However, the next evening when he tried a swim, his heart rate skyrocketed and the ICD kicked in to shock his heart back to normal rhythm. It gave him a second shock as his friend Dirk pulled him out of the water, and he had another two while lying next to the pool. “I was having a VT storm, so Dirk phoned Annalita and they rushed me to hospital, and in that time I had another six shocks!” That resulted in another 11-hour operation and a week in ICU, followed by several more ops, until eventually the day came that Dr Gopal came out of theatre and told Annalita, “Now I am finished with him.”

LONG ROAD BACK
Dawie was told to do nothing strenuous till August 2016, and after initially walking regularly, the doctor gave him the all-clear to start running lightly in mid-November. From there he gradually built up his mileage and in February 2017 felt ready to tackle the Cango Half Marathon in Oudtshoorn. “I no longer ran on pace or time, just on heart rate, and I never went over 160,” says Dawie. Next was the Two Oceans Half Marathon, and by July he felt strong enough to go run his sixth Rhodes Ultra 52km. Then he and Annalita decided they wanted to do the 2018 Full Ironman in PE the following April.

“At the beginning of August I started the Modern Athlete Dare to Tri programme, and I was supposed to run the Sanlam Cape Town Marathon in September, but a week before race day I had to go in for a laminectomy for a pinched nerve in my spine, so no running for the whole of September and October. The back specialist said he wasn’t sure if I would run again, let alone do marathons, but I started running again at the beginning of November, because I had spent a fortune on our Ironman entries, flights, accommodation and gear!”

For the Ironman, Dawie had to get a medical clearance before the organisers would let him start, but everything went smoothly on race day, except for a scare during the swim leg. “The ICD has an alarm if a magnet comes too close, as that switches it off. About 2km into the swim I heard an alarm and thought it was the ICD, so I stopped to check, but I think it may have been somebody’s watch alarm going off nearby. I just had to put it out of my mind and try going on. Annalita and I swam together, then split up later and she finished in 13:11, while I did 13:57. It was pure enjoyment, just being able to participate, but there were a few emotional moments for me along the way. Now we’re already booked to go back in 2019, and we’re going to do the Ironman 70.3 in East London as well.”

POSITIVE ATTITUDE
Dawie and Annalita’s most recent adventure saw them take on the three-day AfricanX Trailrun, where he unfortunately rolled his ankle during the first stage and had to sit out day two before strapping it up and getting through day three. “It healed up OK, but I had to cancel my Comrades trip. It would have been my ninth, so my plans for my Green Number have been postponed by one year.”

These days, Dawie says his heart still sends him a warning now and again. Early in June he was out training when his heart jumped over 200, but the ICD picked it up and paced him out. “Annalita always runs with me, either waiting for me or doubling back to come back to me, and it gave her a massive scare, too, because she turned and saw me lie down on the pavement! That was the first attack since my last op, so I’ve been struggling a bit psychologically with my running the last few weeks… but I’m not going to let it stop me. I get my energy from sport, and if not for sport, I would have ended up sitting at home waiting for it all to end.”