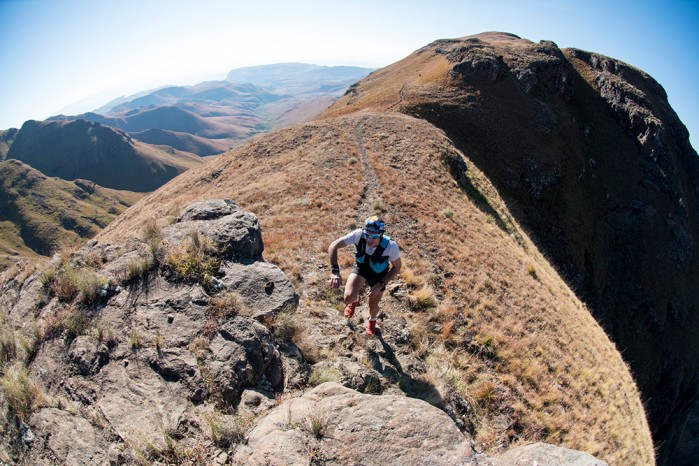 “The mountains are calling, and I must go.”
– John Muir

Over a distance of 20km with a total ascent of 1531m to summit highest free- standing peak in the Drakensberg, at an altitude of 3005m, the Cathedral Peak Challenge requires you to be at your best and your bravest, every step of the way.

The 8th of June 2018 marked the first official run for the money – those quickest to the top and back have a chance to share in cash prizes totalling R100 000.

All 38 of the entrants made it to the start line and completed the daunting challenge to try and bag a healthy R25 000 for the fastest male, female and mixed team of 2.
Some of the big names to set their mark on the Challenge included top trail runners Mlungisi Mazibuko, Perfect Dlamini, Jeannie Dreyer, and Christiaan Greyling and Landie Greyling; top OCR athletes Thomas van Tonder, Dominique D’Olivera, Sabrina Daolio and JP Mare; top triathletes Matthew Holden, Michael Ferreira, Michael Lord and Hayden Corke; as well as Mrs South Africa 2018, Nicole Capper, seven-time Dusi winner and founder of the Change a Life Academy, Martin Dreyer, and Angela Yeung from Trek for Mandela 2018.

Make no mistake; this challenge is not for your average Joe. If you think it will be a Sunday afternoon stroll in the park, think again. A high degree of physical and mental fitness is required if you decide to #ChallengeYourself.

Christiaan Greyling had his work cut out with a late surge from Mlungisi Mazibuko who made a final sprint to the line, which Greyling won in a time of 2 hours 29 minutes and 52 seconds, only 8 seconds ahead of Mazibuko, setting a new course record, which was held by Megan Mackenzie with a time of 2 hours and 53 minutes.

In the ladies’ race, it was one-way traffic for trail runner Jeannie Dreyer, who completed the challenge in a time of 3 hours and 19 minutes, 26 minutes shy of Megan Mackenzie course benchmark set on 10 May during the route launch.

Elite Obstacle Course Racer, Sabrina Daolio came in second, 47 minutes behind Dreyer. The third lady home was Landie Greyling in a time of 4 hours and 8 minutes.

Top of the men’s leaderboard so far, Christiaan Greyling, comments, “What a beautiful experience. It’s something I would recommend to everyone and anyone. Everyone should challenge themselves on this race. It’s hard to explain all the emotions you experience on this mountain. It brings you closer to nature, draws out raw human emotion as you push your limits, but you will never regret it.”

The next date to keep in mind will be 18 July 2018, when a bonus race has been made available in celebration of Mandela Day, after which the series resumes on 28 July, 25 August and 22 September in one of South Africa’s most beautiful regions. These dates are supported race days to the summit, while the Mini Challenge, on unsupported days, follows the course to the base camp of the peak and can be completed at any time before the final day of The Challenge.

Singles can enter for only R250 and teams may enter at R400 per team. Have the chance to beat the best of the best and claim the R25 000 cash prize at the end of the series, for the fastest mixed team, male or female. Participants are welcome to enter again and again and challenge themselves to better their times, until The Challenge’s final day on 30 September – #ChallengeYourself.

While one does not have to stay at the Cathedral Peak Hotel to race, participants that do will receive a 25% discount for the duration of their stay while running the challenge, allowing those brave souls to not only challenge their limits but to renew their souls at this outstanding resort with all its amazing facilities.

Do you have what it takes to #ChallengeYourself?