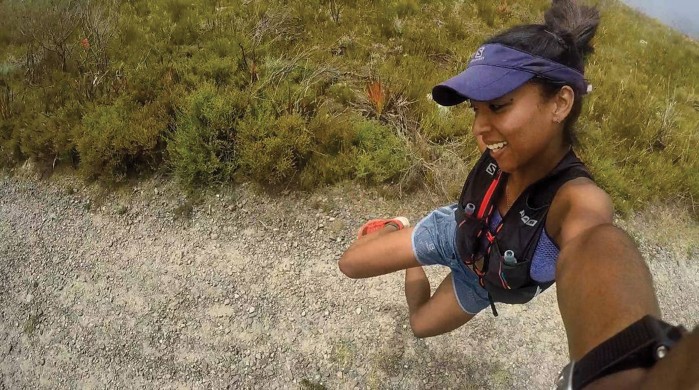 The old saying “Dynamite comes in small packages” could have been written for Shafeeqah Gordon, a Cape Town trail runner with the heart of a warrior and the motivation to prove that you are not policed by your circumstances, but freed from it by your self-belief. – BY PJ MOSES

Petite 24-year-old trail runner and Salomon brand ambassador Shafeeqah Gordon from Westridge in Mitchell’s Plain is understandably proud of her achievements in trail running thus far, given where she comes from. “There is a perception that girls from the Cape Flats are only here to fall pregnant or use drugs, but I am proof that there is a lot more to us as people than just doing that. Knowing where I am from drives me to where I want to be.”

A late starter to the sport of running, this former netball player fell head over heels in love with the amazing highs that trail running brings her when she is out in nature, and she also likes the discipline it takes to become good at it. The University of the Western Cape graduate, with a BA in Sport Science, says that going out there to explore her favourite rock, Table Mountain, is something that she never gets tired of. “The view of the city from the top of the mountain is just so spectacular and it blows my mind every time I see it.”

Overcoming Obstacles
Shafeeqah admits she didn’t have a clue as to what she was doing when she took up trail running. “My big mistake when I started was that I didn’t train properly. I would just run as many events as I could, with no training in between, and this led to me suffering from runner’s knee and having a frustrating time. So, I decided to change this and get a proper training programme, after which my form and my times improved in leaps and bounds.”

An even bigger obstacle was overcoming the pressure of having a fulltime job while also studying and training, as well as the fact that running is not a norm in her community, but she says the love and support from her family and friends, especially the ones in the Cape Town trail community, help her to keep pushing forward. “My parents don’t always understand this trail life, but they support me, and I think they are just happy that I am keeping myself busy with the right things, and not off being irresponsible. There were no guidelines to becoming a trail runner for a young Muslim woman from Mitchell’s Plain. But just like there was no one else in my immediate family in whose footsteps to follow on getting my degree, I don’t mind finding my own way. I am always a Muslim first and a trail runner second.”

Highs and Lows
This trail journey has not been without its low points, though. There have been recent races, like the UTCT 35km and the UTD 30km, where the doubts overcame Shafeeqah, and she says the tears flowed freely. “You question yourself in those moments, and ask whether all the effort and sacrifices are worth it, but what helps me is that I look back to where I started, from scratch, with nobody seeing the dream but me. That helps me get over all the fears, and to finish these races, knowing that I am stronger than I was before, and that I will get where I want to be.”

Her commitment coupled with the guidance she got from top trail runner Meg Mackenzie throughout last year saw her take fifth place at the Helderberg Mountain Challenge last May. “I am inspired by the women in trail who have gone before me, and I want to learn as much as I can from them. This year, my focus has shifted to running longer distances and more technical terrain, and I have Linda Doke to coach me. My goal is to work hard in reaching my potential as a trail runner, and I’m doing my first international race this October, the Salomon Cappadocia Ultra Trail in Turkey, where I’ll run the 38km.” Her family and best friend Jadè are going along to give her moral support, and she says, “I’ve always wanted to run overseas, and it’s going to be extra special having my loved ones there and sharing it with them.”

Apart from the strong women in trail she looks up to, Shafeeqah also takes inspiration from books, like the Ryan Sandes book, Trail Blazer. “I love to learn, and this is just another way of learning to overcome the obstacles that life throws at you. There are always doubts when you set out into uncharted territory, but I back myself to get to that higher level. I have learnt not to stress about things that make you unhappy, but to change them. For any of us to succeed in life, we need to take responsibility to make ourselves happy first. And my trail life makes me happy.”