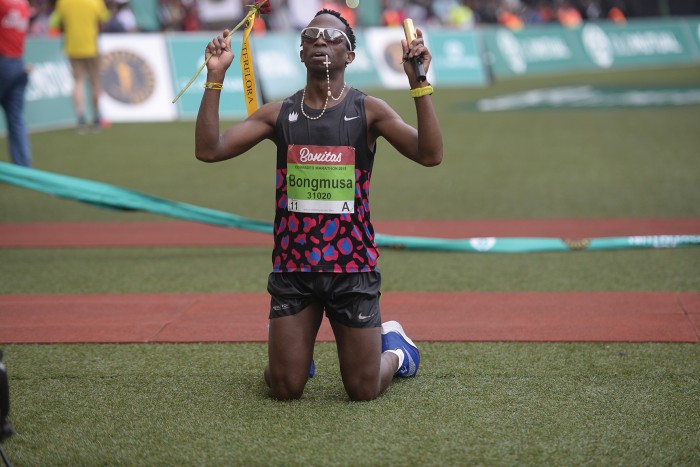 Winning the Comrades Marathon is considered one of the pinnacles of achievement in South African road running. It brings a massive payday, makes you a household name and really puts you on the running map, with sponsorships, endorsements and media opportunities that follow, as Bongmusa Mthembu found out in 2014. However, winning it again takes things to another level, let alone a third time! – BY SEAN FALCONER

It wasn’t so very long ago that Bongmusa Mthembu was struggling to find work and just keeping his running ticking over, having moved from his hometown of Bulwer to nearby Pietermaritzburg in the hopes of finding more opportunities. “It was hard to get a job, but eventually I got hired as a bricklayer, and at that time I was just training to keep my body healthy,” he says. “Then in 2004 I started to enter some of the local races, and in 2005 I won the Maritzburg Marathon, even without proper training. That was when I started thinking about taking part in the Comrades Marathon, and in my mind I already had the dream of winning Comrades one day.”

A disappointing 17th place followed in 2015, but he bounced back with third place in 2016 for another gold, and then in November that year he added the SA Record for 100km to his list of achievements, clocking 6:24:05 to finish second at the 2016 IAU World 100km Championships in Spain and finally beat Bruce Fordyce’s 27-year-old SA Record by 62 seconds! That cemented his status as one of SA’s premier ultra-runners, but more was to come. In 2017 he won his second Comrades title, crossing the line in Pietermaritzburg in 5:35:34 to add an Up Run title to his Down Run win of 2014. That already put him into a select group of men with multiple Comrades wins, but in 2018 even more glory was to come his way.

WHERE FEW HAVE TROD
Prior to this year’s race, just nine men had managed to win the race three or more times in its nearly 100-year history, and of the further eight men with two wins to their name, Bongmusa was the only one running in 2018. Furthermore, just 11 men had ever managed to win the Comrades in back-to-back years, and there again Bongmusa was the only man in this year’s field in the running to change that record. Happily for the affable Arthur Ford AC runner, he was able to do both in his 13th Comrades run.

Having broken away from the chasing pack on Cowies Hill, with about 19km to go, Bongmusa stormed home to break the tape in 5:26:34, beating second-placed Joseph Mputhi by 8 mintes 35 seconds. This made him the first South African to win the race in consecutive years since Bruce Fordyce last managed this feat in 1987 and 1988 (the last two of his eight consecutive wins from 1981 to 1988), and just the third man since Bruce to record back-to-back wins.

After the race, Bongmusa said, “I am very emotional about this win, because the Comrades means so much to me. The experience of my previous Down Run victory helped me a lot, and I decided in Pinetown to break away from the others on Cowies Hill. The Down Comrades only really starts in Pinetown.”

Interestingly, if Bongmusa can win the 2019 Comrades, he would become just the sixth man ever to win the race in three consecutive years. Another Comrades win would also put him level with Alan Robb on four wins, and just one away from joining the Big Five of the race who posted five or more wins. Given the way he has performed over the last few years at Comrades, he looks like he could do just that!


ANN’S AWESOME SURPRISE
In contrast to Bongmusa, who was widely touted by many experts to be a favourite to win the 2018 Comrades, Ann Ashworth was only considered a safe bet for a top 10 position and a gold medal by most pundits. As the old saying goes, shows what they know, because the 34-year-old advocate from Johannesburg pulled off one of the biggest upsets to comfortably win the women’s title in 6:10:04, after a gutsy run that saw her take, then lose and retake the lead in Pinetown. Pre-race favourite Gerda Steyn, the 2018 Old Mutual Two Oceans Winner, was second home in 6:15:34

Ashworth crossed the finish line with a big smile and received a massive hug from her coach, John Hamlett, who added a women’s win to his four men’s wins as a Comrades coach. After catching her breath, she said her race plan had worked out perfectly. “I had started building up for the Comrades with a win in the Legends 68km last year, followed by a fifth place in the Two Oceans and second in the Loskop 50km this year. John told me he believed I could win it, but still, I don't think anyone is more surprised than myself that I am sitting here as the winner. I took two months off work to train for the Comrades, and I want to thank everyone who made sacrifices to help me achieve this.” (Look out for an in-depth interview with Ann in an upcoming edition. – Ed.)