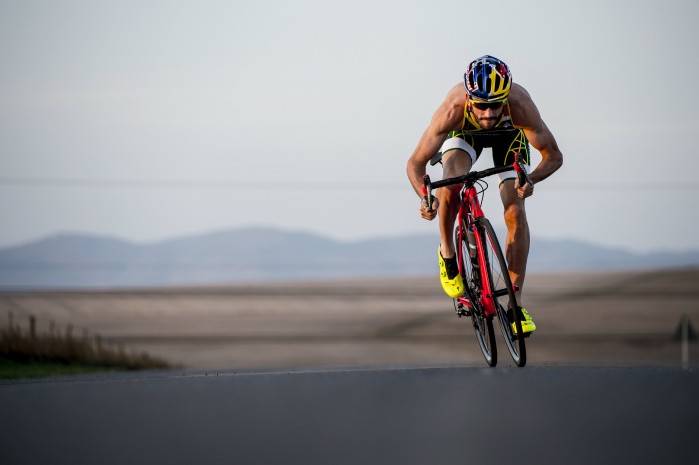 Two-time Olympian Richard Murray posted his most prestigious victory yet in early June, becoming the first South African triathlete to win an Olympic distance World Triathlon Series (WTS) event, and we caught up with him for a quick Q&A after his win. – BY DOUG CAREW & SEAN FALCONER

Earlier this year Richard Murray not only overcame a painful back injury, but also switched coaching staff – he is now working closely with the Dutch national coaching team – and the move appears to be paying dividends, as he won the AJ Bell World Triathlon Leeds in the UK in June. This was his first ever win over the Olympic distance of 1.5km swim, 40km cycle and 10km run on the global stage, and he used his famed running speed to brilliant effect, making his break at the start of the run leg to pull clear of the pack and win in an impressive 1 hour 45 minutes and 52 seconds. Answering a few questions after the race, Richard was understandably ecstatic about his victory.

MA: You must be on a winning high right now?
RM: I can’t really say I expected it to come now, but I’m super, super happy I’ve finally done it! This has eluded me since I’ve started WTS racing. I’ve won two sprints before, and I’ve had one or two second places over the Olympic distance, but never managed to get on top of the podium, so this feels magical. At last, all the hard work and training has paid off. It’s been 10 years in the making… In fact, it’s been my biggest goal since I was 18 years old.

MA: Were you confident going into the race against a stellar field, including world number one Mario Mola, two-time Olympic medallist Jonathan Brownlee and your SA teammate, Olympic bronze medallist and Commonwealth Games gold medallist Henri Schoeman?
RM: I was confident. I have had a few bad races in a row and it has been a tough past three months, but I never doubt myself and know when it all comes together I can have a great day out.

MA: Briefly take us through your race.
RM: My swim wasn’t great, but I tried to stay in contention and was 50 seconds back into T1. On the bike, I pulled back and ended up with the second-fastest split, and then on the run, the legs felt really great. I’m not sure why I battled in the swim. Sometimes I just don’t feel great and battle to find a good stroke. I got very weak and was falling off the back of the pack. I need to find out the cause, with my coaches.

MA: Weren’t you afraid that cycling so hard would leave nothing in the tank for the run?
RM: I never really thought of that, as my legs felt really good, and I just focused on cornering well, as there were so many corners. The tight course really played to my strengths. After the bike, I didn’t feel that tired, which helped me on the run. Around 7km into the run Mario started to close in and was only nine seconds behind, but I put the hammer down and held him off.

MA: When the pain hits during a tough event, where do you find inspiration?
RM: In this race, I knew this was my moment and I could not let it go. I just believe that if I’m hurting the guys behind me must be in agony as well, so just handle business! It’s always going to hurt, but who can handle the hurt the longest wins.

MA: On a related note, what do you think about when you are competing?
RM: It’s like meditation and complete focus; there’s a lot happening when you are flying around corners and have to focus 100 percent on the bike!

MA: And after the race, what is the best way to treat a sore body?
RM: Massage, burgers, milkshake, friends, family, hydration and a hot bath.

MA: What do you eat and drink before, during and after the race?
RM: I stick to a similar diet leading into races and test what I’ll eat in the days leading up to race day. It’s good to get my digestive system to train on the food that I will be competing on, and don’t try new things. No garlic, spicy stuff or sea food, and not too much veggies or bran the night before a race!

MA: You run in a pair of PUMA Speed 300 IGNITE 3. What makes them perfect for you?
RM: They are soft, responsive, medium weight, have enough support and a good toe-off for fast running. I looked for a shoe that I can race a lot in, and this shoe with its 8mm drop from heel to toe is perfect.

MA: What attracted you to PUMA?
RM: I have been working with PUMA for eight years. I love this brand and have gone through three different phases of running shoe developments with the company. It’s a brand that’s laid back and fun, and works well with my personality. I love to give feedback on the technical running shoes and how to improve things, and it’s a treat that the company uses my feedback.

MA: While you were winning in England, your fellow PUMA athlete Ann Ashworth was winning the iconic Comrades Marathon. Is that on your bucket list?
RM: I do enjoy long runs, but I’m not much of an extreme distance runner, so Comrades is not really on my radar.

MA: So what’s next on your racing programme?
RM: Next up is a Bundesliga event in Düsseldorf in July, followed by Hamburg, the next stop for the World Triathlon Series. I just hope I can continue in this way and head towards my next big goal, the Tokyo Olympics, two years down the line.

MA: And finally, your advice for young athletes considering the triathlon path?
RM: Believe in yourself, find good coaches, don’t be soft, but listen to your body and take recovery days. And don’t be too serious, have fun!