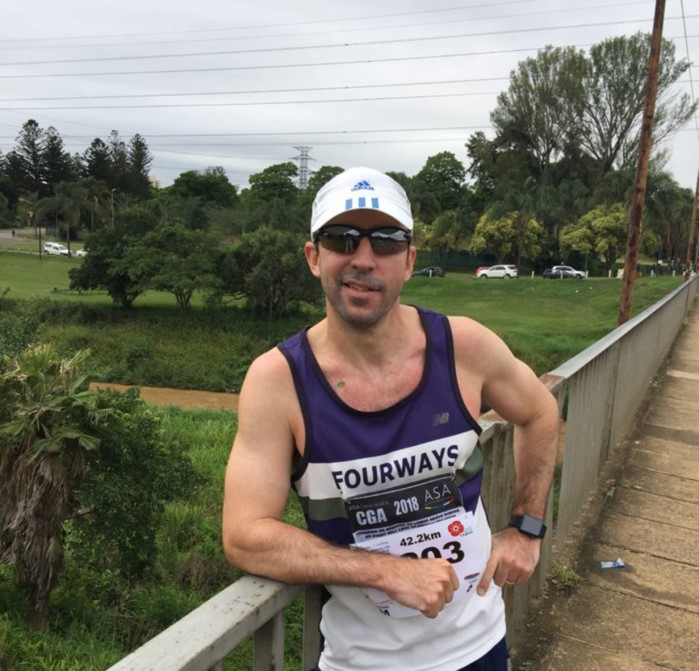 In the May edition we featured one of Stuart Mann’s humorous blogs about his quest to complete 100 unique marathons, so this month we decided to show you a bit more of his unique take on things as we gear up to make him a regular contributor in the mag. – BLOG EXTRACTS BY STUART MANN, COMPILED BY SEAN FALCONER

Stuart is a Joburg-based professional Lean-Agile Coach (in the software industry) and describes himself as a compulsive marathon runner, experienced joker and mischief-maker, a father of two gorgeous girls and husband to one gorgeous wife, and a trainee feminist who regularly rushes back from marathons for his daughters’ dance recitals.

His popular Running Mann blog has for the past months been focused on his immediate goal to complete 100 unique marathons before Comrades 2018, which he achieved in April. “I’ve found some great marathons all around South Africa, and the world, on this quest,” says Stuart. As a proudly South African runner, he has already started his next quest, to run every marathon and ultra in SA.

Running a marathon every week is thirsty work, and Stuart’s lifetime goal is to attract a beer sponsor, but says he would settle for someone to sponsor his travel costs so that he can run more marathons and share their story. “I believe that every marathon has a personality and I try to bring this out in my reports. I’m especially passionate about the small races and love to promote them to other runners, as well as South Africa to foreign runners as the best marathon running destination in the world.

“My other goal is to attract enough blog readers and social media followers to have my costs covered to run marathons and write about the experience – that’s my ‘selfish goal’ – and to use this platform to raise money for educational charities in SA, my altruistic goal. It must be working, because after collecting my medal at Two Oceans this year and while congratulating my fellow finishers, I was asked, ‘Are you the crazy bastard who runs marathons all over the country?’ That’s probably the sincerest compliment one can receive from a fellow ultra enthusiast!”

Given his quirky sense of humour and entertaining way of writing about his running experiences, we decided to put together a few extracts of his recent blogs. We think you’ll see why we decided to make him a regular in the mag. Take it away, Running Mann!

See the Lighthouse at the End of an Ultra
Bay Ultra, Port Elizabeth, Eastern Province
(Marathon #175 / Unique marathon #92 / 3 February 2018)
People sometimes make jokes about PE being slightly backward. However, I discovered that they are actually ahead of the rest of the world. (Well, those who use the Gregorian calendar, anyway). Most provinces provide a January schedule that allows their runners to slowly progress into marathons and hold back on the ultras until well into March, e.g. Joburg’s January races are Kudus 15km, Dischem 21km, Striders 32km and then Johnson Crane 42km. In PE they skip the short stuff and head straight into ultra season – or so I thought. When I verified this with a group of runners from Charlo Athletics Club, asking them, “Is this PE’s first marathon of the year?” they replied, “No, we already had one at the beginning of December!” So there you have it, PE is on a time zone that is at least one month ahead of the rest of the country.

A Return To The Mainstream
Maritzburg City Marathon, KwaZulu-Natal
(Marathon #178 / Unique Marathon #95 / 25 February 2018)
If you do run into any difficulties on race morning, it would be very difficult to plead ignorance, as one receives seven pages of detailed instructions over e-mail from race director John Hall, who leaves nothing to chance. I noted that the race instructions included a few interesting words that have not been used in contemporary writing for many years, like “tarry” and “muster” – so it is highly appropriate that the race starts in Old England Road.

The Fastest Ultra in Africa
Uniwisp Fast 50, Nelspruit, Mpumalanga
(Marathon #179 / Unique Marathon #96 / 3 March 2018)
After about 8km I realised that I had forgotten the lubricant, and by this stage, I had worked up a good sweat under the hot Lowveld sun. Although my legs were still fresh, I realised that I was starting to ‘wear out’ where the sun don’t shine (a bit like rusty steel wool scouring exquisite porcelain). I knew that I had to make a plan fast, or I would be spending the rest of the weekend walking around like John Wayne!

As luck would have it, the Van Heerden Pharmacy table was around the next corner and had a full medical kit available. As I approached, a kind lady noted the desperate look on my face and politely asked if I needed any help. Whilst simultaneously grabbing hold of a giant tub of Vaseline, I politely declined her kind offer and said I would self-medicate (much to her relief, as she realised the nature of my distress).

The Good, The Bad and The Ugly
Old Mutual Om Die Dam 50km, Hartbeespoort Dam, North West North
(Marathon #181 / 10th Om Die Dam / 17 March 2018)
Once you get going it’s all plain sailing… until you reach Saartjies Nek at 14km. Legend has it that Saartjie was a nasty witch who now haunts the pass (making this a real “heks’ nek” as was pointed out to me by @Chris211162 on Twitter). For the first time since the race started in 1990, the route was flipped, so you hit Saartjies much earlier in the race (she was a much nastier nymph on the old route when you met her at 39km).

The climb has always been a highlight of the race – I normally look forward to a nice long, guilt-free walk! Water tables line the road with ‘mop messages’ from Saartjie. In addition to the placards in the picture, halfway up the climb you get “Saartjie het jou” (Saartjie’s got you) and at the top “Saartjie sê sien jou volgende jaar” (Saartjie says see you next year). When I first ran the race, Saartjie could only speak Afrikaans, but she has learnt a bit of English over the years – maybe she’ll also start speaking another of our 11 official languages in years to come!

A Love Letter to my Favourite Ultra
Old Mutual Two Oceans Marathon, Cape Town, Western Province
(Marathon #183 / 16th Two Oceans / 31 March 2018)
South Africa hosts the two biggest (and greatest) ultra marathons in the world: Two Oceans and Comrades. I’ve been asked many times about the difference between the two. My philosophical view is that if you are a teenager in love, Two Oceans is the sweet, charming, beautiful girl that you should marry. Comrades is the girl that’s way out of your league, but is malevolent enough to string you along, making you think you have a chance, only to break your heart (and your body) after crushing your spirit and ripping out your soul.

Growing up in Cape Town, Two Oceans was my “girl next door” – and it was as a teenager that I fell in love with her. I had just started high school at Rondebosch Boys and they asked for volunteers to hold up kilometre boards over the first 15km and man (or in my case “boy”) the last support table on the route. This seemed like a really good idea, since I could support my Dad (The Old Running Mann) and we were told we could drink as much Coca-Cola as we liked on the day. In future years, Rustenburg Girls School were invited to partner us at the table, which made the proposition even more attractive!

The Pick of Polokwane
Mall of the North Marathon, Polokwane, Limpopo
(Marathon #184 / Unique Marathon #99 / 7 April 2018
This race’s main sponsor is Jaguar, and Land Rover is owned by the same company. A long time ago I used to run like a Jaguar. Unfortunately, these days I run more like a Land Rover… I tend to leak almost as much, but don’t need to be rescued from the side of the road nearly as often! I did, however, volunteer to do some modelling shots in front of the Jaguars to help sell a few more cars. I even offered to do a driving shot, but they weren’t too keen for me to sit on their shiny leather seats. Can’t say I blame them, I wouldn’t want a sweaty marathon runner stinking up my fancy new cars!

Where The Hills Have No Name
Jackie Gibson Marathon, Johannesburg, Central Gauteng
(Marathon #185 / 3rd Jackie Gibson / 15 April 2018)
We got going on a bitterly cold Joburg morning, but the warm tops were quickly removed as we hit the first hill. I asked local runners and support table personnel what some of the many hills were called, but they all seemed to be nameless. When I checked with race director Cathy Munn after the race, she responded to my question with “Nothing official for the hills.” This is a race with so many hills no one has bothered to name them yet! In the absence of official titles, most runners seemed to resort to the very simple naming convention of AFH – where A is for Another, H is for Hill and F can be filled with the adjective of your choice. Unfortunately, marathon runners are not particularly imaginative, and there seemed to be a lot of duplication with the choice of ‘F word’ used to describe each hill…

In upcoming editions we will feature more of Stuart’s unique take on all things running, but if you would like to check out his full blogs, go to http://runningmann.co.za, or follow him on social media: @runningmann100.