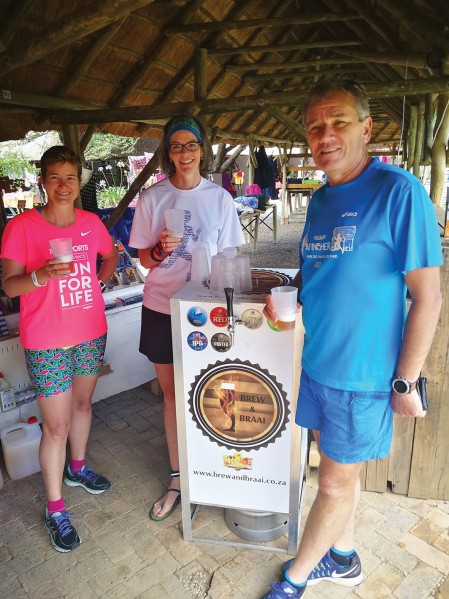 With a passion for running, exploring, drinking beer and having fun, Shawn Combrink travels the world in search of new adventures, and along the way he has put together an impressive running streak that defies the doctors who said he may never run again. – BY LAUREN SMITHERS

Shawn Combrink’s running journey began in Cape Town back in the early 80s when he found a training plan for the Two Oceans Marathon in a newspaper. He was already a social runner, regularly doing Saturday morning 5km Heart Foundation Fun Runs with a group of mates, but admits “this was more an excuse to enjoy a few post-run beers with the boys.” However, when he started following the Oceans training plan, he says he was hooked. “Unfortunately, I had to relocate to Johannesburg for work, which meant that I was not able to run that year’s Oceans after all, but in Joburg I continued running, joining a group of colleagues for a 10km run every lunch time.”

In 1987 Shawn ran his first marathon – the old Pick n Pay Hyper to Hyper in Pretoria – which he managed to finish in 3:25, even after arriving late to the start line thanks to the dodgy navigation skills of his running partner. He chuckles as he remembers painfully running the last bit of that race on the yellow emergency lane line. “I was convinced that the paint would stop my feet burning, because it wasn’t as rough as the tar!”

Where’s Wally?
At that stage, Shawn says he didn’t have any intention to run Comrades, and actually knew very little about the race, but a year after his first marathon, when a friend wanted to run Comrades before emigrating, Shawn agreed to run a section of it with him. They therefore started training and running races together, one of which was finally Two Oceans, and then they lined up at Comrades together. Content with the idea of running just the first 20km or so, Shawn says he actually got to the start line not really knowing what he was doing – mostly because he and his friends had enjoyed a great night out after experiencing the vibe at registration…

By the time Shawn and his friend got to Pinetown, he felt strong, so he told their seconders that he would continue running and meet them a bit further along. “That was the year that Wally Hayward was making his long-awaited return to Comrades at the age of 79, so I suggested to my friend that he only needed to run consistently until Wally caught up to us, and then he could just follow his pace, which would ensure that he finished on time.” However, they had just crossed the little bridge in Camperdown when they asked a spectator if he had seen Wally, and were told the great man had already passed that point about an hour before!

Seriously disgruntled, Shawn and his friend walked the next 5km trying to fathom what had happened to their strategy, but they continued running, and Shawn landed up crossing the finish line in 10:37:45 – nearly an hour after Wally – after deciding at each landmark to just go on just a bit further. “I have to admit, I was overcome with emotion as I got to the top of the grass embankment overlooking all the gazebos at the finish line, just before entering the stadium. I realised that if I could do that, I could do anything,” says Shawn, and it was exactly this attitude that saw him reach the Comrades finish another 11 times – and later saw him return to running again, when he thought he never would.

Back to Basics
Years later, after completing the amazing Marathon du Medoc (a.k.a. The Wine Marathon) in France, Shawn and his partner in life and adventure, Paula, were spending a few days on a barge in the French countryside, when he accidentally took a tumble from a jetty. Having seriously hurt his back, he resisted seeing a doctor for almost two months when back in South Africa, but says “not even a brandy-painkiller combo could numb the pain, and so I was off to the surgeon, who explained that surgery was my only option, and that it would be a long road back to health. He added that I would be the only one to determine whether or not I would run again.”

As so many injured runners experience when they can’t hit the road, Shawn suffered a bit of depression after his surgery, but he was determined not to be another complacent couch-surfing-former-marathon-runner, as he puts it. He was advised by his physiotherapist to walk as much as possible, so he took to hobbling around the house and was soon venturing outside to see how he would manage a kilometre. “It was 14 minutes of pain and discomfort, and I was flat on my back for the rest of the day, but it was also the beginning of my road back to running,” says Shawn.

He challenged himself to complete a kilometre every day for two weeks, which then turned into a month, and then the distance grew by a block at a time until he was walking the Johnson Crane Half Marathon soon thereafter. That also started a streak that Shawn has kept going: To date, he has walked or run at least a kilometre every day since that December morning first walk. That’s over 1600 consecutive days now, and he says, “It’s something everyone can do with a bit of effort. There are always excuses, but you can’t just give up.”

If it’s raining hard, he has been known to go out late at night, once the rain has stopped, and he even does his kay when travelling abroad, but jokes that he hasn’t yet been brave enough to actually run in an international airport building, as he fears he might be shot at. Still, to get in his daily kay, he has walked from terminal to terminal during lay-over stops.

Collecting parkruns
During his rehabilitation, Shawn discovered the parkrun concept and began joining the then small groups of people who would run on Saturday mornings at nearby Delta Park. Since then, he has completed a parkrun at 68 different venues, including two international parkruns. “At the heart of my passion for running, and what has made the journey back to completing marathons all the more enjoyable, is my desire to travel and experience all that is beautiful in the world, so parkrun has been just another great way to combine my two great loves.”

One of the international parkruns he and Paula did was in Waterford, Ireland, and says they were astounded to see that the whole thing was over and packed up in 45 minutes. “Their emphasis is very much on the ‘run’ in parkrun there. On the opposite side of the spectrum was the fun and sense of community we enjoyed after the Treviso parkrun just outside of Venice, in Italy – once we finally found the venue. We then ran through the most beautiful forest, and suddenly a man with a guitar appeared out of nowhere at the finish to serenade us all while we enjoyed what seemed to be warmed ice tea.”

Shawn’s whole face actually smiles when he tells of the places he and Paula have discovered and the people they have met along the way, thanks to running. They scour the race calendar to find different, new races or parkruns to do while they explore the country, and they have been everywhere, from running majestic Cannibal’s Cave parkrun in the Drakensburg, to the Screaming Monster race that takes you into the Sudwala Caves in Mpumalanga.

They have also stumbled upon some real running gems, says Shawn. “En route to Phalaborwa for a race and getaway, we escaped the frustration of a stop/go delay on the Magoebaskloof Pass by stopping for a cold one in a little town called Haenertsburg. While chatting to the locals in the pub, we learnt about the Iron Crown Trail Run organised by the Haenertsburg Rotary Club, which takes participants to the highest point in Limpopo, where a man hands out shots of OB’s to ease the cold. We just had to come back to do that!”

Next Round
Added to travel and running on Shawn’s list of interests is craft beer. When he injured his back, Paula bought him a beer brewing kit for Christmas, and spurred on by a friend who is a craft beer connoisseur, Shawn’s curiosity began to grow. With the help of Paula’s skilful researching, the couple have now discovered craft beer breweries in the most interesting places, including the Kebenja Brewery in an old car dealership workshop in Welkom. They now often combine a running trip with a visit to a new brewery, and Shawn says, “It’s all about embracing the local culture and community. Cheers!”

Another goal is to run 100 different marathons worldwide – at the time of writing he had done 84, including 15 international races – before he takes it a step further to completing 100 different standard South African marathons. For that reason, top of his current bucket list is the Swakopmund to Walvis Bay Marathon in Namibia, which is run at the same time as the Oktober Beer Fest, so it will be perfect timing for some post-run beer tasting!

Looking ahead, Shawn says he wants to continue his streak of walking or running at least a kilometre a day, wherever he is, while another goal is to add the Boston and Tokyo Marathons to his done list, to round off his collection of Major Marathons medals. “Paula really has her eye on the special medal you get for completing all six,” he adds. “But my ultimate goal is to run until I die, and to continue exploring the world, completing races and parkruns, finding breweries, and making memories.”