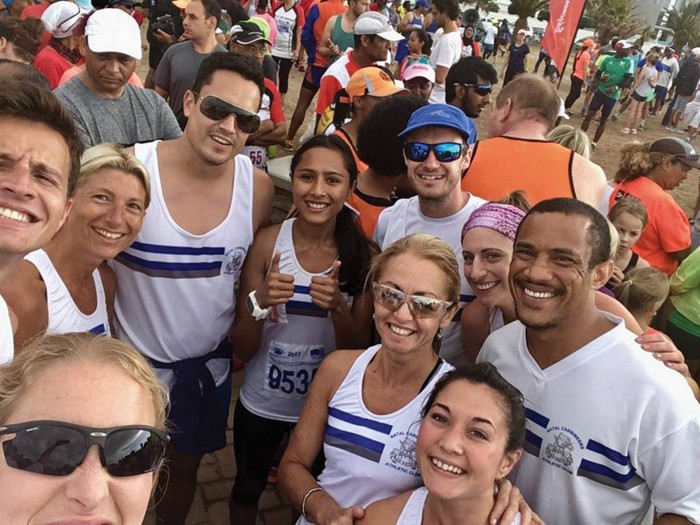 Razaan Kamaldien has shown amazing juggling skills as she manages the busy life of a top Western Province junior runner and a University of Cape Town law student, and is now really starting to fly in her running. – BY PJ MOSES

In between a heavy academic workload, training for the UCT hockey team and hours of training as a runner, young Capetonian Razaan Kamaldien excels at all she does. “I always want to be as good as I can be at everything I try, and be the best version of me in all I do!” she says. And she has certainly excelled at running, since deciding to take it seriously four years ago, having become a regular podium finisher at road races all over the Cape. Recently, she raised the bar for herself still higher by winning the junior title at the 2018 Old Mutual Two Oceans Half Marathon, heading a very strong field of junior girls from across the country.

According to Razaan, the support and encouragement of her Dad, who is also a runner, has given her the wings to fly. “My parents have been very supportive in all that I do, but especially my Dad, because he runs too, and he knows how much work it takes. When he introduced me to running it was only for fun and keeping fit, but when I realised that I may have some potential for being good at it, he was willing to drive me around to races, even when he wasn’t running.”

She also credits a move to the Carbineers WP Athletic Club as a catalyst in her becoming mentally and physically stronger. “My coach Candyce Hall has been great with the advice and support she has given me, including teaching me about being patient when I have setbacks, or how to be a leader among the junior girls that I compete with. Still, I wasn’t expecting to do as well as I did at Two Oceans, because I was sick with the flu just two weeks before the race. I thought that I wouldn’t have anything in my legs, but it all worked out and I surprised myself with finishing strongly and taking the win in a time of 1:40!”

BALANCED APPROACH
Even though her life is busy, Razaan makes the time to spend with family and friends. “Find time for yourself and do not allow a busy life to overwhelm you. One of my favourite quotes says, ‘If it’s important, you’ll find a way; if it’s not, you’ll find an excuse.’ To me, prioritising my life is second nature. I set a schedule for myself and stick to it. I think proper time management is an important key to success.”

The youngest of four kids, Razaan’s family is what keeps her grounded and focused on her goals when a lot of other young people are caught up in the distractions the world has to offer. “I think especially girls need to find out what makes them happy and give their dreams 100 percent effort. Running made me a better person because it gave me a place to be me, but also to be surrounded by a new family in my club and the Cape Town running community. I don’t judge other people and the way they live their lives, but I prefer spending my time with family, training, studying or going to the movies. It keeps me on the right track.”

Another favourite pastime when she needs a break from running and studying sees Razaan take out her fishing rod and head to the nearest jetty with her Dad. “I love fishing. People often laugh when I tell them this, but it is a normal part of my life, and I don’t even mind the smell of fish on me,” she giggles. “Okay maybe I don’t love smelling like fish, but it doesn’t bother me much. I love just being close to the ocean – and I don’t eat what I catch, but release it back into the water.”

RUNNING GOALS
As she moves up to the senior level, Razaan is looking forward to the challenges ahead. “I’ll be running against my heroes, women who have blazed a trail for me and other young female runners. I hope their knowledge rubs off on me, as we compete and run together.” For now, her racing preference is the half marathon, but she says she can’t wait to be old enough to take on marathons and then ultra-distances. “I enjoy the longer distances, but I know that I still need to do the shorter ones to get faster. My goal is to run a sub-40 10km in the next five years, and by the time I hit my mid-20s, and with my coach’s blessing, I can run marathons. I will be more than ready.”