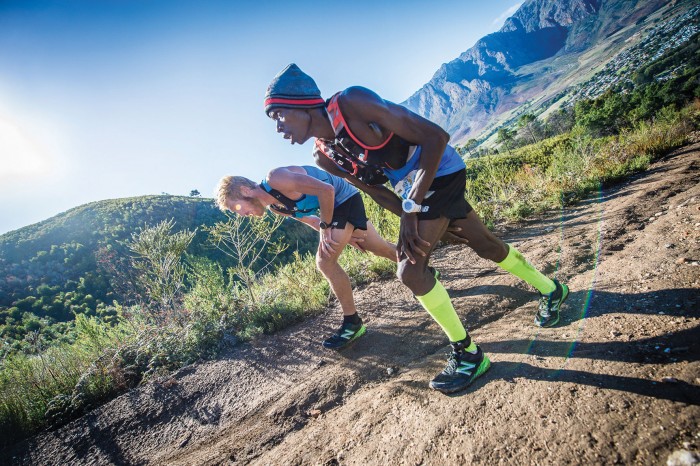 A love for picturesque nature and breathtaking mountains is what propelled Bernard Rukadza into running back in 1999. Fast forward to 2018 and he is a three-time AfricanX Trailrun Champion and one of the top trail runners on the South African running scene. – BY REGINALD HUFKIE

Over the long weekend at the end of April, Bernard ‘Bernie’ Rukadza and K-Way Wintergreen teammate AJ Calitz once again dominated the AfricanX Trailrun presented by Asics, winning the first two of three stages and running away with the overall title for the third time as a pairing. Having also won in 2014 and 2015, they are the only men’s team to score a hat-trick of AfricanX wins in the 10-year history of this prestigious event.

“The AfricanX is the biggest stage race in South Africa and is attracting a lot of top people. The scenery of the race is wonderful, the vibe and the organization are great, and it keeps you going back,” says Bernie. “Winning this year was a great pleasure, and it shows that AJ and I are still a great team. We didn’t plan to win the first stage, as stage two was always our main focus, but we were happy to win both stages, and then we just protected our lead on day three.”

The 38-year-old Cape Town-based Zimbabwean pro runner met AJ through his then running partner, Eddie Lambert, at the 2013 AfricanX. “From there we met up, chatted, and then teamed up for our first AfricanX. We won it and have never looked back.” When asked what makes their team so strong, Bernie humbly answers, “It’s nothing much, but if you are determined and focused, that’s the thing that makes us a very good, strong team. Teaming up with AJ is awesome, because he’s a really supportive guy who is very humble and likes running very much.”

TAKING UP RUNNING
Born in Nyanga in the mountainous Manicaland province of Zimbabwe, Bernard didn’t take running seriously until after school. He saw that his older brother Axson and others were making a living from running, so he decided to give it a try himself, and then moved to SA in 2008 to run professionally. “My brother is the one who introduced me to running. He participated in many races and got his job through running, but he never won because of limited time due to work. He always said he believed I will definitely win a big race one day.”

Bernie’s initial focus was on the road, and he notched his first win at the West Coast Half Marathon in Langebaan in 2009, in a 1:06 course record that still stands. However, his focus changed later in 2009 when Eddie introduced him to trail running. “I was not even running with the right equipment – I was using road shoes – but then I started winning races, and I won the Spur Cape Winter Trail Series for the first time in 2010, so I started taking it more seriously,” says Bernard.

Over the years, Bernie has amassed an impressive list of race wins, not only dominating the Trail Series for many years, but stepping it up to win multiple titles at all three of the Mountain Challenge Series races (Jonkershoek, Helderberg and Marloth), and also claiming wins in both the Old Mutual Two Oceans Trail Run long and short races, the once-off Old Mutual Two Oceans Beast 47km Ultra Trail, the Richtersveld Transfrontier race and the three-day SOX stage race (again partnered with AJ).

LOVING THE MOUNTAINS
Trail running comes naturally to Bernard, but what really makes him so good is his strength on the climbs to go with his natural speed on the flats. “Trail running is tough, but when it comes to more climbing, it becomes easier and more enjoyable, because I love mountains and nature,” he says, but he is quick to add that his running success stems from the support he received from his wife Sharon and two young kids. “My family is my number one supporter. Whatever I do, they always believe I will come through, and they give me much support, so I always make sure that I never disappoint them.”

While Bernie’s immediate goal is the 2018 Mountain Challenge series, he says he would love to win a major marathon on the road. He has also steadily been improving in the Old Mutual Two Oceans Ultra, finishing 14th this year in 3:19:35 to improve on his previous best 23rd in 3:29:41. “I’m looking forward to the Mountain Series, but my big goal is to win a major marathon so that I will get a nice sponsorship and can go compete abroad. I feel that I can still conquer a lot of mountains if I can get a great partnership. Then the sky is the limit.”