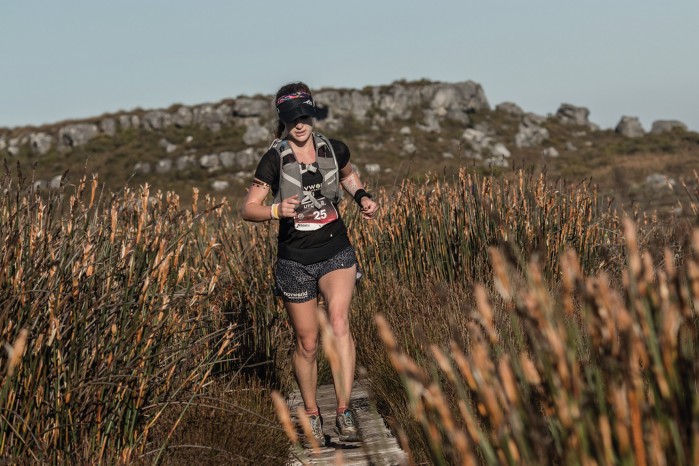 In between studies, looking after stray animals, avoiding rhinos and promoting women’s safety while out running, Naomi Brand is carving a name for herself on the global stage of ultra trail running. – BY SEAN FALCONER

Muddy… That sums up the conditions during the Addo Elephant 76km Ultra in the Eastern Cape earlier this year, which made it that much harder for the athletes trying to place in the top three in order to win selection for the SA team for the World Ultra Trail Champs in Valencia, Spain on 12 May. ASA had decided that the leading women needed a sub-8:00 in order to be considered for selection, but the conditions soon made that unlikely, says 29-year-old Pretoria-based ultra runner Naomi Brand, who finished second woman and third overall.

“The roads were like rivers, and we were knee-deep in mud at times. Under the circumstances, the race director wrote to ASA and convinced them to extend the qualifying time by 35 minutes, so three women qualified, but even with the extended time, the men still had to run under seven hours, hence only one qualified,” she says. “As a result, I had to wait a month to find out if I had been selected, and in the meantime I had been invited to run the Madeira Island Ultra Trail 100km on 28 April, but when I heard I was in the World Champs team, I knew immediately I couldn’t do both. So I downgraded to the marathon in Madeira and will use it as a warm-up for World Champs, then stay in Spain for two weeks to acclimatise.”

“The World Champs will be 85km long, and the whole race is basically uphill, but I am so excited about going, because it will be my first time representing SA. I’ve been so close before, and unlucky at other times, like in 2016 when I qualified for the SA B Team at the SA Champs run with the Hout Bay Trail Challenge in Cape Town, only for ASA to cancel our trip to the Grand Trail des Templiers Ultra in France. I am therefore going to make the most of this opportunity!”

RUNNING PEDIGREE
Naomi has been running since her primary school days and says it is part of her lifestyle, not just a sport she takes part in. She has run at provincial and national level in cross country and road running, won the Maties Best Cross Country AthIete award while at university, and was identified as one of the top 10 upcoming female athletes that took part in the Comrades Marathon in 2015. However, her focus is currently on ultra trail running. “I am ranked the third-best long distance and ultra distance female trail runner in SA at the moment by ITRA, and I work and train hard to achieve my goals. I also love to share my running experiences with the friends I’ve made through races and training around the world,” says Naomi.

Naomi’s selection for World Champs is richly deserved. She had a solid 2017, winning the Addo Elephant 100 Miler in a time that took five hours off the course record, and she also won the Chokka Ultra Trail 70km and Karkloof 100 Miler races. Towards the end of the year she added a third position in the Ultra Trail Cape Town 100km, which she says was particularly satisfying. “I had done about 800km of racing in the build-up to UTCT, so was a bit tired. The medics wanted to pull me off the course a few times, because I was so pale, but I have been anaemic for years, hence often collapsing at the finish of races. After Addo I saw a sport physician who diagnosed haemostatic hypertension, which is common in athletes, and suggested I wear compression socks. I think I now know what the problem is and am better equipped to handle it.”

Of course, this condition has not been helped by ultra training done on top of the long hours that Naomi puts in doing practical work at Onderspoort Animal Hospital in Pretoria for her veterinary studies. She first studied animal science at Stellenbosch University, then did an honours in wildlife science at Kovsies in Bloemfontein, worked as a field guide for a year, and then started at Onderstepoort. She is now in her final year of studies, which will be followed by a compulsory service year. “I applied to be placed at the Animal Rescue Unit in Phillipi, Cape Town next year, which will mean I can be close to my family again. But I actually want to work with wildlife, specifically elephants.

BIG ON ANIMALS
Naomi’s passion for animals stems from her days growing up on the family farm near Velddrif, on the West Coast. She says the family did a count recently and worked out that they had 68 different pets or animals that they cared for through the years, including a caracal kitten and penguin chick, so no surprise that her oldest sister Adri is also a vet, while middle sister Alae (also a very talented runner and triathlete) is a doctor. She even had a little hedgehog until recently, but it had a tumor and unfortunately didn’t make it, so now she just has her cat and dog.

Of course, wild animals are unpredictable, and this saw Naomi endure a frightening encounter with a black rhino a few years back while running in the reserve where she worked. “I was actually very lucky, because they don’t see well and can’t gauge distance, but their sense of smell is very good, and when they can’t figure out what something is, they tend to charge. That rhino was extra aggressive and chased me for 2km, which is far for a rhino to run. I only managed to get away when I turned off the trail and he couldn’t see me any more. Then I just collapsed next to the thorn tree I was about to climb in desperation – somehow, when you need a tree to climb, there are only thorn trees around!

Fortunately, Naomi is able to stay calm when in danger, thanks largely to a terrible experience she had just after finishing her Matric exams. She was walking across one of the school’s sport grounds in Stellenbosch, on her way to gym, when she was accosted by a homeless man who wanted money. “When I said no, he pulled out a knife and pushed me down towards the river, where he strangled me, hit me in the face and broke my nose, and told me he was going to rape me and then kill me. I was really lucky that two boys happened to cycle past and saw my stuff on the river bank, then heard the commotion. The guy got a fright when they asked what he was doing, and I managed to run away, half naked and with my eyes swollen shut.”

“The guy was arrested and put in prison, but only for three years, so I always worried that I could run into him again, or that he would hurt someone else. It took me a long time to get over it, and it still makes it hard to head out alone for a run today, even though I carry pepper spray. On the other hand, it was an important event in my life, and where my drive today comes from. I kept thinking this might be the end, and that changes your perspective on how you live your life. I think it changed me in a good way, and it’s also why I am very outspoken about women’s safety, but I decided it wasn’t going to stop me running!”