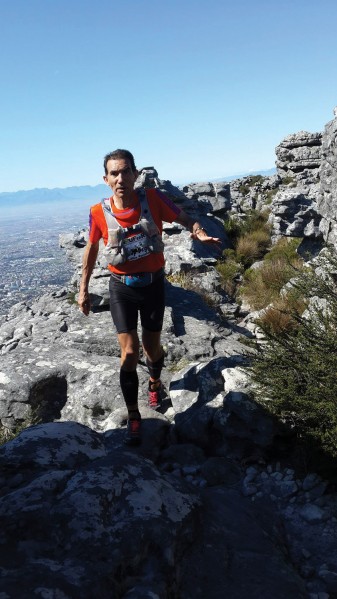 After 35 years of running, with much of it done on the trails around Cape Town, Allan Ryninks can not only look back on a glittering running career, but can also share a wealth of running wisdom with fellow runners and administrators, which is why he is playing a leading role in the development of trail running in SA. – BY KIM STEPHENS

Allan is a familiar face on both trail and tar in the Cape, regularly challenging for line honours in the grandmaster category after pinning on his number 60 age category tags last year. Before that he spent the previous 10 years rocking top spot in the master’s category of trail events such as the PUFfeR Ultra, Helderberg and Jonkershhoek Mountain Challenges, Hout Bay Trail Challenge and VWS Trail Run. His credentials also include 31 Old Mutual Two Oceans Ultra medals, with 13 consecutive silvers and a PB of 3:27:41, which placed him 14th overall in 1986, and has completed more than 180 marathons, with a lifetime marathon PB at Cango of 2:30:59.

Even after so many years of running, Allan says his desire to keep running is undiminished. “After turning 60 in July 2017, and still feeling insanely passionate about my running after 35 years, there is no limitation between me and the next runner’s high waiting on trail or road. My passion and pleasure has been derived in both arenas over the years,” he says.

HITTING THE TRAILS
A former founder and Chairman of Hout Bay Harriers, Allan is currently the Chairman of Wild Runner Athletic Club, and until recently was Chair of the Trail Running Association of the Western Province (Trail WP). He continues to serve on the national steering committee of ASA’s Mountain and Trail Running division. He only officially took up trail racing in 2005, but says he had been running trail for many years before that.

“In the early 1980s, we used to run all the well-known trail runs of today as training runs, just not with all the bumph that is used today! Our gear included shorts, shirt, running shoes, and a bank bag – the original collapsible water cup. The Boland 80km Trail and the likes were favourites for Comrades training, and trail running has actually been the backbone of training and success for many runners over many decades.”

“Trail running only really formalised in SA into races during the early 2000s, but since then it has boomed into an international industry and sport. My belief is that trail opens a door to a multitude of fresh young talent, and has helped SA to identify latent talent in so many athletes that road or otherwise would not have noticed, due to all the administrative red tape, and at times bungling.”

LOSING THE PASSION…
Although Allan’s running career has been impressively consistent, there was a dark patch that began at the end of 1993. “I reached a point where my belief in the training and my ambition just took a number of steps sideways. Training was too intense, and the self-imposed pressure to do better got way ahead of me, to the extent that I started Oceans in 1994 and ran to halfway in 1:44:16. By then I had pit-stopped twice, and was feeling sick and overwhelmed that I had to finish this race in a good time. I knew that all I really had to do was to run easy for the remaining 28km, and it would be another Silver medal in the bag, but I came to a sudden decision to just quit and go home. And not just quit for the day, but to walk away from the sport that I loved so much. I was done, and no convincing could change that.”

He says this feeling prevailed all the way into 1996, by which time he was very unfit, but also content. “I played lots of golf, and got down to a handicap of nine. Then in 1997 I was living in Constantia and working from my office at home, directly behind the VOB sports grounds, and day after day I witnessed these folks meeting for their club runs, and just having fun, with no pressure. The thought of running again popped into my head, only this time I knew I can do this, and I knew I want to do this again, but this time I would be smart.”

That saw Allan join VOB and soon he was back in the swing of running. “I just let it happen naturally. I met up with old running mates and competitors from years before, and slowly allowed the desire and the passion to creep back in. The rest is history. What I have learnt from it all is that running is a huge part of my life. I am passionate about it, and I have a very strong will and drive to achieve at it. As long as I keep it a passion and not an obsession, then I will be okay.”

SAGE ADVICE
Having begun running in 1983, Allan has also been coaching since 1986 – he is an ASA Level II Long & Middle-Distance Coach – and of all the advice he has for runners, this remains his personal go-to: “You do not know it all. I certainly don’t. Every day is a learning opportunity. No matter what, there is always something positive to take away from your experience. A bad run or race is part of growing – if you don’t crash and burn, you don’t learn. Consistency is your key to being a better runner, and my pearl of wisdom is that you build a strong endurance foundation, no matter the intended race distance. Think of it as the foundation to your pyramid. A bigger foundation provides a bigger pyramid, and the bigger the base, the higher the peak.”

Adapted and reproduced with permission from an original article written for www.wildrunner.co.za.


Sidebar: On the Right Trail

As a member of ASA’s Mountain and Trail Running Committee, Allan is part of the ongoing efforts to regulate and manage trail running in a way that benefits the runners, organisers and administrators, so we asked him a few questions about the way forward. – BY SEAN FALCONER

MA: Where do you think trail running is headed in SA?
AR: There is a lot of confusion in the athletic arena, particularly from athletes, who just know that the request has been made for some level of functionality within the country, but all they really care about is being able to run freely, not being regulated by the national body.

MA: So is ASA now in charge of trail running?
AR: It’s only by virtue of the IAAF giving the mandate for trail running to be included in national athletics codes that ASA even became involved in trail running, but the status quo has been maintained, with trail still effectively separate. It is thus linked to ASA as an associated body instead of an official commission. Jakes Jacobs is heading up ASA’s Cross Country and Off-road Commission, which trail now falls under, but he and others at ASA have said they want to let trail running sort itself out, without putting too much pressure on the discipline.

Meanwhile, Altus Schreuder is back in charge of the ASA Mountain & Trail Running Committee, with the mandate to promote and organise trail running on a national level, including regular SA Champs and teams being selected for international events. Granted, the last SA Champs at Addo earlier this year were organised at very short notice, but I still think the progress made thus far is positive.

Ideally, I think we need a South African Trail Running Association (SATRA), with each provincial trail body under this umbrella and then also associated with its provincial athletic body. The IAAF has already said it will recognise such a body, as it does with the International Trail Running Association (ITRA), but in SA we’re not there yet. My biggest fear is that people in trail running dragging their heels too long will end up with ASA getting more involved than the trail people want, because to date Western Province is the only province that has been proactive on this front, with its own governing body for trail.

However, Trail WP’s membership is still low, as trail runners and event organisers in general don’t want regulation, but they need to understand that Trail WP is not looking to regulate the sport, rather to function as a mouthpiece and go-between for runners and organisers with the governing bodies, while trying to do what is best for both sides of the fence.

MA: How has all this affected the average trail runner, if at all?
AR: Nothing has changed for most trail runners, and ASA is continuing to leave them to do what they want. No club colours or licence numbers, none of the strict rules of road running… so trail runners can still do their own thing, and the discipline is still growing and going forward. In fact, it’s booming.

MA: What about regulation of event organisation?
AR: Fortunately many players in the sport have been around for a while and most do a good job, but there is a concern that fly-by-night operators can put on events without due diligence, and I dread the day that something big goes wrong at an event. That said, many new organisers are approaching us for advice on putting on events.

MA: And the problem of over-saturation of the market, with events clashing?
AR: Currently there is no control in place, but I do foresee that may be on the menu soon, and it needs to be addressed on a national level. In road running in previous years, we had events that clashed and suffered with reduced numbers as a result, and the same is happening in trail. I’ve spent the last three years trying to get event organisers on a national basis to provide event dates and results, so that we can build a national database for the sport, which will also help with selections of SA teams, but that’s still a long way off.