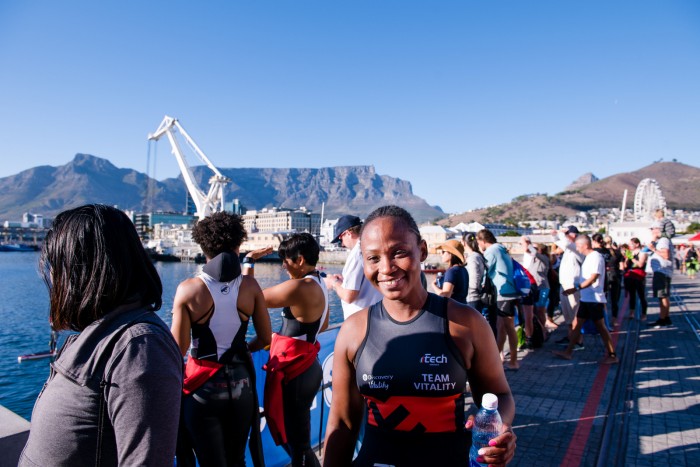 Dumisile Mthalane transformed her body and her life when she discovered triathlon, and after her recent successful outing at the Discovery Triathlon World Cup Cape Town in February, she reckons everybody should start preparing now to be part of the event next year!

Looking at the harbour sea water as she prepared to dive into the swim leg of the Discovery Triathlon World Cup Cape Town, Dumisile Mthalane admits she was panicking a bit. “Everyone had told us that the water in Cape Town is freezing. I come from Durban, where we swim in water of 20 to 21 degrees, so when I heard the water in Cape Town was only about 14 degrees, I started to panic, because I had never swum in water that cold before, but I actually found it OK,” she says.

“In the end the swim was lovely, especially since the water in the harbour is nice and flat, with no waves. After that the bike leg had amazing views, plus we had a bit of wind to cool us and sometimes push us from behind. Then the 10km run was also great, all run in the Green Point precinct, with lots of spectators and more than enough nutrition on the route. I never once felt dehydrated.”

Unsurprisingly, after enjoying such a great day out, Dumi says she can’t recommend this event highly enough. “It was very well organised, all the way from registration to the finish line, and I really enjoyed it. I loved the great atmosphere, with all the spectators shouting your name, and I also love that the event caters for everybody, whether you’re just starting out with triathlons and want to try a sprint distance, or doing the longer standard distance, for those of us who want to push it up a bit or improve our times. It’s a great event, and I hope to see even more people joining us at the start next year.”

Getting into Triathlon
Dumisile’s adventure began when her weight really started to hold her back in 2014. “I felt heavy, and would huff and puff from climbing just one flight of stairs,” says the 35-year-old project manager. At this point she weighed 82kg, with a body fat percentage of 36.9 and cholesterol of 6.9 mmol/l, and says that her weight had gradually crept up over the years. “It started when I moved to varsity in Joburg. I stayed in residence, where the food was not the healthiest, and because I didn’t exercise at all, I gained a lot of weight.”

Having decided enough was enough, Dumi started running in order to lose weight. “I love to be outdoors and I have the beautiful Durban Promenade on my doorstep, so it made sense, but I didn’t enjoy running, so I moved to cycling,” she says. “However, my diet was still not great, so I wasn’t seeing results. Even when I added trail running to my exercise programme, the weight-loss wasn’t happening. Frustrated, I visited a dietician and went from eating three meals a day to eating five, with adjusted portion sizes. That’s when I started seeing my weight drop at last,” she says.

“Then in June 2015 I volunteered at the inaugural Ironman 70.3 Durban, and was so impressed by the athletes. I thought I would also like to see if my body can go the distance in a triathlon. Because I couldn’t swim well, I started lessons with stroke correction a few months later, and I set a lofty goal for the year of my 35th birthday: To do the Ironman Durban 70.3.” And so in August 2016, she took on her first multisport event, at the 5150 Bela Bela Triathlon in Warmbaths, and she says it was a nerve-wracking experience at first.

“I was so scared I would be cut off during the swim leg, because I had no confidence in the open water, even though I had done a few sessions in the sea. Fear of being in the middle of the water surrounded by lots of people swimming faster and better than me, and not being able to touch the ground or a wall, terrified me. But I made it, and I was incredibly proud to win my first triathlon medal! Then I entered my first Ironman 70.3 event in Durban, taking place in June 2017, and having entered, there was no turning back! I enjoyed the training and became far more confident when swimming in the ocean, and I completed that 70.3 in a time of 7 hours, 58 minutes and 38 seconds.”

Change of Focus
These days Dumi says her focus has shifted completely. “My training is no longer about weight-loss, because I found something I love doing, and activities that make me happy. Training for races and collecting medals are much more exciting goals.” Nevertheless, nutrition remains a major part of Dumi’s regime. “I eat healthily because I need to fuel my body with good, nutritious food to perform well in training and races,” she says.

“I used to eat three meals a day, but often I would get so hungry I would buy junk food to fill me up until I got home for supper. Now I eat five smaller meals, so there’s no need to find unhealthy fillers, and I prepare my meals based on my training demand for the next day. I also cut out juice and fizzy drinks, and I drink a lot of water now. I train too hard to be on a bad diet, as poor food affects my energy levels.”

To those who also dream of accomplishing a sporting goal, Dumi says: “Have a plan and stick to it. Remove ‘I can’t’ and ‘I don’t have time’ from your vocabulary. I also find having a buddy or training with a group makes you disciplined, even on days when you don’t feel like training. You become accountable to your training partner, you motivate each other, and it becomes more fun. Do something that you love and enjoy, and I promise you, you will meet your goals. You will see results.”

Make it Fun
She adds that you need to focus on maintaining a healthy lifestyle every day, but you should still make it enjoyable. “If it’s fun, you are more likely to continue with it, and Discovery Vitality has made this healthy lifestyle more fun. I have Vitality Active Rewards and this pushes me to train in order to meet my weekly targets. My team members and I check up on each other achieving our targets, so it goes back to the idea of accountability – you’re in it for the team.”

“I'm a Discovery Vitality member on Diamond status, so the rewards help a lot in that you get cash back and discounts on many of the items that you need to achieve your goals, such as training gear, fitness devices, healthy food, travel discounts, gym memberships and so on. Added to this, the annual health screening tests make you aware of your health status and if you’re not within healthy ranges for things like cholesterol, blood glucose and blood pressure, you get a wake-up call to change your unhealthy habits.”

Since starting training, Dumi says she is more energetic and more focused. “I now look after my health, as I know the consequences if I don’t. I'm doing things that I never thought I was capable of. I am trail running in breathtaking places that I never knew existed; I have met incredible like-minded individuals and made valuable friendships. I feel so much more confident, and it’s amazing to focus on something, see great results, and as a bonus, have fun doing it!”

Ready for the Next Challenge
Besides the Cape Town event, Dumi has also done her first international event this year, at the Ironman 70.3 Dubai. “It was also an amazing experience, with the race village full of athletes from all over the world. The organisers really went all out. The best part for me was getting through the swim, because the water was very choppy and a lot of swimmers pulled out, but I told myself I am going to keep going. I decided that they can cut me off if I don’t make it in time, but I won’t give up, because if I keep pulling out of races when the going gets rough, I will never know if I am winning or losing.”

In spite of swallowing a fair amount of salt water and feeling a bit sick when she came out of the water, Dumi powered through the bike and run legs to add yet another tri medal to her growing collection, as she continues to smash old boundaries and new goals for herself, which include the Ironman 70.3 Turkey this coming October. She now sports a leaner frame at 69kg, and dramatically lower cholesterol levels, and says her achievements have attracted the support of friends, colleagues and family. “They are thrilled that in the process of pushing my body to new limits, I have found new happiness and joy.”