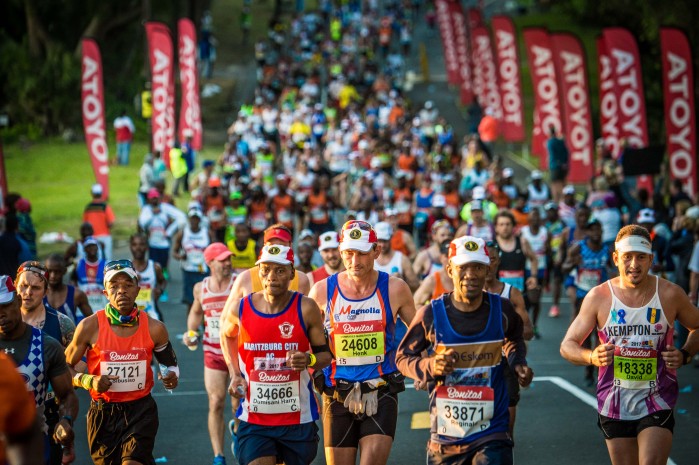 The peak training for the Comrades Marathon is now over, and while we enjoy the extra hours of the taper period, it is time to use the ‘calm before the storm’ to develop our battle strategy and set our race day goals. Here’s how to work out what your realistic Comrades finish time goal should be. – BY NORRIE WILLIAMSON

No battle was won without a strategy or a game plan, and distance running is similar… Comrades cannot be conquered with a ‘see how it goes on race day’ approach. No matter how fit and fast you are on race day, those who don’t have a logical pacing plan, or rely solely on others for their pacing, will pay the price and fail to achieve. So here’s how you should go about working out your game plan.

Step 1: Know your Ability
As of the third week in May, the die for your potential finish time has been cast. Based on the combination of best raced 5km, best raced marathon, and total distance from January to June, it is possible to accurately calculate your 2018 Down Run finish time. An easier rule of thumb is to multiply your best 10k time in minutes by 11.55, and you will get a Comrades finish time potential in minutes. From this it shows that:
•  Silver medals go to those who can run 10km in under 38:50,
•  Bill Rowan requires 46:20,
•  10-hour runners must better 51:30,
•  11-hour bronze requires you to be faster than 57 minutes,
•  And to beat the 12-hour cut-off, you must be able to run 10km in 61 minutes. (This latter barrier being set by the CMA’s intermediate cut-off times, not by normal pacing logic.)

Another handy way to work out your potential Comrades time is to use your mile time (four laps of an athletics track), working it up with the Comparison of Performance & Distance table below to a projected marathon and/or Comrades potential time.

That’s 1550 racers, which is only 10% of the starters; the rest are ‘safe’ – safe silvers, safe Bill Rowans, safe bronzes or safe Vic Claphams. These runners should initially target a time that will allow them more tolerance in the race, and keep them away from ‘red-lining’ the whole way.

For example a runner with a 48-minute 10km best in the last six to nine months has a potential finish of 9 hours 15 minutes. This is well outside Bill Rowan potential, and what does a 9:15 mean compared to say 9:25, 9:35, or even 9:55? In fact, the medal will be the same right up to and past 10:55, so why race it? Some may say for a Personal Best, and that is credible, but the fact is the time will be a PB for the course anyway, as the 2018 race features a new course, new venue and longer distance than the last 40 years of Down Runs!

Of course, we all want to do the best we can, but look at all the distance world records: They are not achieved by running to a schedule from the beginning, they are run and raced over the final quarter, or even final sixth, of the race. That’s where the ‘excellence’ and extra 5% to 10% performance is earned.

Therefore, the advice to the mass of Comrades runners is to select three goals: The first is your realistic potential based on the formula (say 9:15 in the example), then an acceptable goal (perhaps 9:29 in this example), and thirdly, a fallback point if things go wrong (perhaps 9:59 for this runner, but it may even be over 10 hours if this was a novice).

Look closely at the ‘accuracy’ of achieving these goals: The difference between the average pace for this runner’s ‘top desire’ (6:04 per km) and satisfactory secondary goal is only nine seconds per km! And just 19 seconds per km to the ‘fallback’ goal.

Debatably, on one of the longest and most emotional running days of your career, achieving such accuracy of pacing is no easy task. This challenge is exacerbated by the ever-changing terrain: There are no major flat roads where you can check your pace, or get the feel of your average pace, because Comrades is either up or down, and the only flat you experience between the start and finish lines are the final 2.7km in the city centre and along that long wide dual carriageway to the massive icon of Moses Mabhida Stadium. By the time you reach this point, your finishing pace will have long since been set, and average pace will mean nothing, only finishing will!

PS: Don’t miss next week’s article!
Next week’s follow-up article discusses how to pace the Comrades, and will explain why your Comrades race day outcome will have been determined before you leave Maritzburg. It will also show why the English poet Kipling has more in common with Comrades than Gunga Din (The Team trophy for men at Comrades).

About the Author
Norrie has represented Scotland, Great Britain and later his adopted South Africa in ultra-distance running and triathlon. He is an IAAF-accredited coach and course measurer, has authored two books on running, and counts 21 Comrades medals amongst his more than 150 ultra-marathon medals. You can read more from him at www.coachnorrie.co.za.