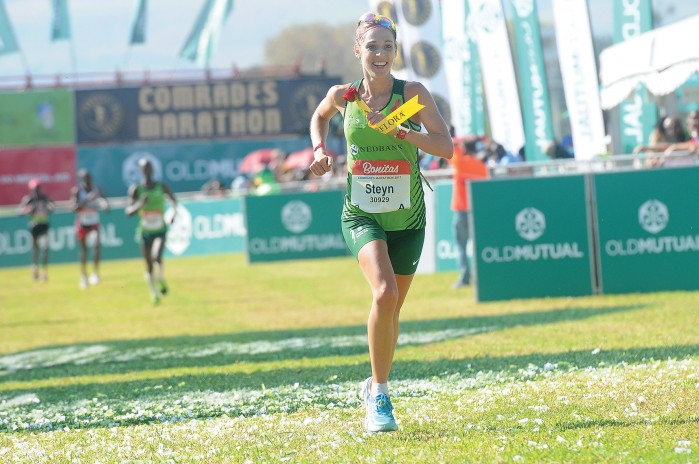 As Gerda Steyn pulled up next to Polish race leader Dominika Stelmach-Stawczyk around the 45km mark of the 2018 Old Mutual Two Oceans Marathon, she did something that had many a pundit thinking back to the days of Bruce Fordyce in his prime. She turned to her opponent and congratulated her on a good run, then went past her and never looked back. Not once! – BY SEAN FALCONER

The famous story of the Fordyce Handshake has become part of South African racing folklore. In the 1980s, the nine-time winner of the Comrades Marathon would pull up alongside the leader of the race, give him a solid clap on the back, congratulate him on a great run and tell him he looked great, crunch his hand in a strong handshake, and then rapidly pull away. The idea was to psychologically tell the now former leader, you may be strong, but I’m stronger, and I’m going to win. And that’s what it looked like Gerda had done to the Pole, but she just laughs when asked if that was her plan. “I actually didn’t shake her hand, because I was worried that she could still catch me again in the last 10km!” explains Gerda.

“Coming down Chappies, I heard she was 800m ahead, and as we got into Hout Bay and hit the marathon mark, I could see her just ahead of me. I kept gaining on her up the Constantia Nek climb and caught her just before the top, and that’s when I said a few words to her, and congratulated her on a great run. She asked me where the other women were, which I couldn’t make out at first, but she repeated, ‘How far behind?’ I told her to relax, she still had a big gap, but that’s when I knew I could win it. Still, I thought she would be chasing me, because she still looked good, so I never turned around again and just ran for my life. I decided I’m going to give it my all, and if she still catches me, she deserves the win. The last five kays were especially hard, and I was not feeling the love in my legs, but that’s how I planned it. The Two Oceans is back-loaded in terms of the hills, so I knew it would be hard and I felt destroyed by the end.”

However, that couldn’t stop a massive smile appearing as Gerda came hurtling down the home straight at UCT, waving to the crowd and punching the air in delight as she broke the tape in 3:39:31. “I was so tired at the end, but that crowd gave me new energy and it felt like I was doing a 100m sprint. Finishing fourth at Comrades last year was incredible, but this is by far the highlight of my running career so far. Actually, of my life!” Remarkably, her winning time not only beat her own previous best for the race by more than 36 minutes, it was also the third-fastest ever by a South African woman at Two Oceans – only Frith van der Merwe’s race record 3:30:36 from 1989 (on the old, faster course) and Azwindini (Gladys) Lukhwareni’s 3:38:56 in 2004 were faster.

RAPID PROGRESS
It’s been a positively meteoric rise to ultra-stardom for 28-year-old Gerda. Born and raised in the Free State, she had always loved sport at school, trying everything, but had never been a runner. Then at university she took up recreational running with a friend for general fitness, and even did a few half marathons, but nothing serious. Having qualified as a quantity surveyor, she moved to Dubai for work in 2014, and it was there that she began to take running a bit more seriously.

“After two months in Dubai I decided to join a running club to make friends and stay healthy. The first time I joined the Desert Road Runners, I met a large group of South African Expats who regularly come back to SA to run the Comrades. They invited me to join them and I said maybe one day, because I had watched the race on TV with my mom when I was young, but just seven months later I was on a plane to SA to attempt my first Comrades. Around the same time I met my fiancé, Duncan Ross, who works for Emirates Airline and is also a Comrades runner.

It was at that 2015 Comrades that her life began to change, when she met Nedbank Running Club manager Nick Bester two days before the race at a pre-race function. “We chatted when I asked him for his autograph and he told me to go enjoy the Comrades, but afterwards I should train specifically for a marathon, and if I can run sub-3:00, he will train me and help me, and even consider adding me to the Nedbank Development Team.” Having run an impressive 8:19:08 to finish 56th in that first Comrades, Gerda then headed to France a few months later for the Nice Marathon and posted a 2:59:54.

“That was the moment that my running career really began. I mailed Nick that same week, then came to see him in December and he signed me on. Initially he coached me online, sending me programmes via mail, but I was back in SA so often that I could train with the local runners – Duncan works for Emirates Airlines, so it was easy to get flights home – and I was already thinking that if it went well I would quit my job to pursue running.

A NEW CAREER
The focused approach to training saw Gerda post eye-catching times in 2016. She finished 13th in the Dublin Marathon with a 2:51:31, was 14th at Two Oceans in 4:15:44, and then took 14th position at Comrades in 7:08:23. In 2017 she won the mass race at the Great North Run Half Marathon in the UK in 1:17:47 and shot up to fourth at Comrades in 6:45:45, and that led her to decide to go all-in with her running. “I had never known I had a talent for running, because I was never exposed to endurance training, but with the success I was enjoying, I decided to resign my job and see where running could take me. I felt I had nothing to lose, because I can always go back to my job.”

That saw her blitz a 2:37:22 PB to finish 12th at the Valencia Marathon in Spain late last year, and this year, prior to her Oceans win, she won the Standard Chartered Dubai 10km in a huge PB of 34:35, and with Oceans now behind her, the focus has shifted back to Comrades. “It’s a huge dream of mine to win Comrades, but I can’t say for sure now if I can do it this year. If not this year, then next year, or the year after that… I will keep on trying, but will have to see how I recover from Two Oceans first, because it’s a dangerous trap to fall into pushing too hard, too quickly. Luckily we have 10 weeks between the two big races this year, so there is enough time for recovery and no need to rush back into training.

Another factor counting in Gerda’s favour is her balanced approach to training. She doesn’t believe in just doing high mileage, preferring to run a steady, manageable amount of kays and supplementing that with cross-training in the form of cycling, swimming, walking and hiking. “I still run six days a week, but the cross-training helps me to save my legs. It works for me, so I’m sticking to that plan for Comrades. I also incorporate a lot of trail running in my programme, especially when I’m recovering, because the impact is less, and I use steep trails for strength work. I think that should be an important part of any runner’s routine, even if you’re training for a flat marathon.”

MAKING PLANS
Looking ahead, Gerda says she is planning a big announcement soon about her plans for later this year – it sounds like a ‘Big City Marathon’ is on the cards, and she says she is equally excited about pursuing the marathon as she is about ultras, thanks to that 2:37 in Spain. “I went into ultras immediately when I discovered I could run, and while I do believe that ultras can kill your speed for marathons, I also believe it comes down to your training, and how you manage your body. Some women could maintain speed for the shorter distances even though they ran ultras, like Frith, and given my training methodology, I think I can too, so I am certainly looking forward to my next marathon.”

Gerda and Duncan are currently living in SA for a while, but will be moving to France in June, after the Comrades. They have been renovating a house in Sainte Foy, in the French Alps region, so she will have plenty of mountain trails to run, hike and mountain bike on. “I enjoy the mountains and I spend as much time outdoors as I can. I don’t like sitting around. In Dubai, there are mountains about one and a half hours’ drive from the city, where it looks like a Mars landscape. We did our best to escape the city often for camping weekends away, but in summer it is impossible to go outside, let alone train, so I am actually fortunate now to escape that heat and am looking forward to training in the Alps… But first I am focusing on the Comrades. Really looking forward to the race.”