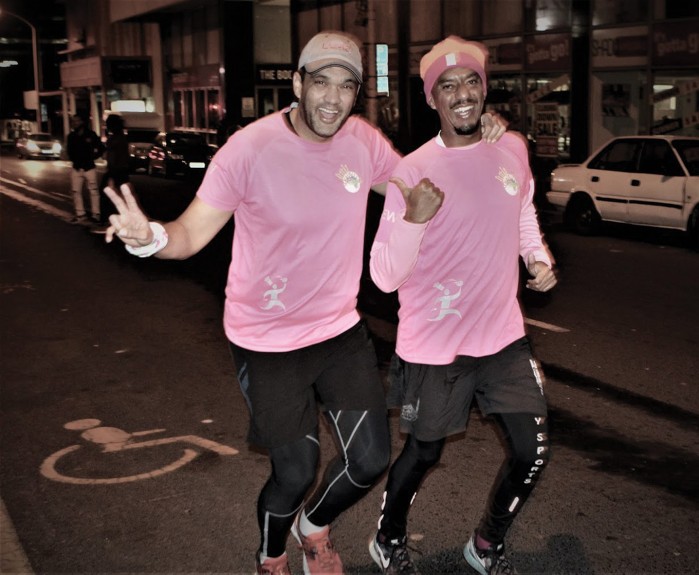 Irafaan Abrahams and Faizel Jacobs come from different backgrounds, but together they founded Lace Up For Change, a running-related NPO established in 2016 to make a difference in the lives of the homeless in Cape Town. – BY SHANAAZ EBRAHIM-GIRE

In 2012, Irafaan was teaching at a high school in Mitchell’s Plain, an area fraught with social ills and poverty, and was driven by a need to help those around him, especially the youth. Having always been involved in sports, he rallied his friends and family in a bid to raise awareness of the educational and financial challenges faced by schools on the Cape Flats, and set out to raise R1 million by participating in running events around the world.

Over the last few years, he has run the New York, Chicago, Boston, London and Amsterdam marathons, and by engaging the community, exceeded his fundraising target by raising well over R2.5 million for local schools. Remarkably, he did so in spite of a medical condition that sometimes makes running hard. “Very few people are aware that I suffer from Angioedema, which flares up when I least expect it. However, when I started running, I felt empowered and knew that I would not let my condition define me. Running was liberating,” says Irafaan.

Meanwhile, Faizel’s running journey was no less inspirational. After beating cancer and being forced to live with a permanent stoma, he was invited to run the Chicago Marathon in 2016. “I was asked to participate as part of a team fundraising for an oncology wing for a children’s hospital in Palestine. At that stage, I had only participated in 10km road runs, so I was very nervous, but also extremely excited. After just three months of training, I found myself pounding the streets of Chicago and successfully completed the marathon,” he says.

MUTUAL CAUSE
The two runners came together in 2016 to establish Lace Up For Change, an amalgamation of their mutual vision of uplifting and empowering the most vulnerable in society. At the time, Irifaan was working with a local NGO, Islamic Relief South Africa, which initiated a ‘boeber and blanket’ distribution during the Islamic holy month of Ramadan. Boeber is a sweet, cardamom-flavoured hot milk drink that is a favourite amongst Muslim families during the fast.

Taking the idea further and adding running to the mix, The Boeber Run has become the flagship Lace Up For Change activity. The team goes out monthly to different areas, to complete a 5km run and give back dignity and respect to ‘the forgotten people;’ the countless faces living on the streets. “We have an amazing group of volunteers from the running fraternity who have rallied behind our cause. Through their networks, they manage to secure donations of hot meals, fresh fruit, boeber, sandwiches, sanitary towels and toiletry packs. The team meets at a central point to do our 5km run, before we begin our distribution drive,” says Irifaan.

Faizel adds that the run is also bringing new people to the sport. “Our Boeber Run has become a catalyst for many people to start running. Every week we have new people coming out to walk or run, because they want to be part of the camaraderie, and because they enjoy the excitement and spirit of the drive. Many have now taken up running permanently. We are also overwhelmed by the phenomenal response we have received from the youth. What started for some as an exciting opportunity to run late at night has now become a mission to roll up their sleeves and make a positive change in their community.”

BACK TO SCHOOL
A recent development saw the Lace Up For Change team launch a bursary fund in March to support homeless children and adults and help them complete their schooling and vocational training. “The bursary fund was an idea we had for a long time. We realised that we needed to move beyond just doing a weekly drop of food and clothing, and that we needed a more sustainable, long-term plan to assist the homeless,” says Faizel.

“During one of our Boeber Runs, we came across a young girl, Hajierah, who dropped out of school because she did not have a school uniform, school shoes and the basic necessities like stationery and toiletries. She is a really bright young woman and dreams of becoming a doctor, so that she can help her community. She became the first recipient to receive funding to complete her schooling career. I will never forget her look of utter disbelief when I handed over her uniform and school shoes.”

He adds that all runners in the Western Cape are welcome to join the weekly Boeber Run. “We want to see people put aside their perceived notions of poverty, because there is nothing more fulfilling than being able to serve the less fortunate. We sincerely thank all the volunteers and sponsors who support us. Lace Up For Change is just getting started, and we look forward to rolling out more development programmes and making running more meaningful.”