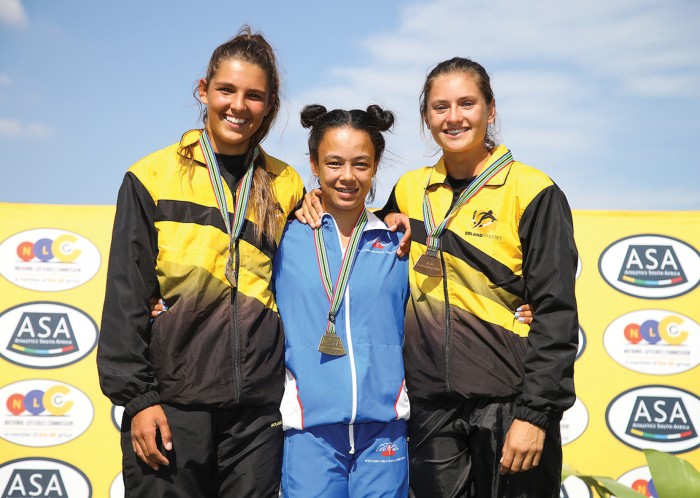 Having recently won her first SA senior title, pole vaulter Jodie Sedras is ready to push on to see just how high she can go in this technically challenging field event. – BY ADNAAN MOHAMED

Sitting on the couch in the hotel foyer in Pretoria, the diminutive Jodie Sedras smiles shyly as she answers questions about her latest success in athletics, looking more like a schoolgirl than her actual age of 23. Just a few hours earlier she had been crowned the South African Champion in the women’s pole vault at the South African National Track and Field Championships at the Tuks Stadium in Tshwane. However, it seems reality still hadn’t sunk in for the dynamic little athlete from Strand in the Western Cape.

Standing just 1.5m tall in her socks, Jodie blew away the competition at the Champs, leaping to an outstanding 3.90m to beat Nicole Janse van Rensburg (3.80m) and Tonet Tallie (3.50m), both from the Boland, who claimed bronze and silver respectively. This made Jodie the first Western Province athlete ever to bag a gold medal in the women’s pole vault, and her winning jump also improved her previous best of 3.80m by a huge 10cm.

LATE STARTER
What makes her performance so astonishing is that she only started doing pole vault after she left school four years ago. “I was a gymnast when I was at school, and I had always heard that gymnasts make good pole-vaulters, so, I thought I would just try it out when I started studying at Stellenbosch University,” says Jodie.

“Initially, my intention was just to do it for fun, and it was only when I cleared three metres that I decided to take it seriously. All I knew was that three metres is the first big milestone, and everybody was getting excited about it, so when I cleared the height I thought I was amazing. However, I quickly realised that I am actually not that amazing, so I decided to work harder. The Maties Athletics Manager Mohamed Ally then introduced me to the club’s pole vault coach and I took it from there.”

“Pole vaulting is not an easy discipline. It is extremely challenging, but when you finally get it right, it is very rewarding, because you know you had to work hard for it. To run with a four-meter pole in your hand is hard as it is, let alone jumping. To be successful in pole vaulting is not only about speed, it is more about rhythm. You have to start slower and gradually accelerate, and end as fast as you can,” she explains.

DOMINANT FORM
With her B.Sc degree complete, Jodie is currently studying sports conditioning at the ETA College, in Stellenbosch, and also putting a lot of time into her jumping. “I train twice a day with a gym session in the morning and a vaulting session later in the evening.” This has seen her dominate the discipline in SA for the past two years, having previously won the SA Junior title, but until 2018 she had not managed to win the senior title. The win in Tshwane therefore meant a lot to her, she says.

“Winning gold at the SA Seniors has always been my goal. When I started out four years ago, I knew that I would eventually achieve this, because I consider myself to be someone who works extremely hard. My next goal is to reach 4.10m, and I am confident that I will get there. I also know that I will eventually get to the Olympic qualifier of 4.50m,” That would also see her eclipse the SA Record of 4.42m, set by Elmarie Gerryts in June 2000 in Germany, but Jodie just shrugs and confidently adds, “I think I have accomplished quite a lot in a short period of time, and I am really excited about what I can achieve in the future.”

Sidebar: Pole Vaulting Pointers
•  Pole jumping competitions were known to the ancient Greeks, Cretans and Celts. It has been a full medal event at the Olympic Games since 1896 for men, and 2000 for women.
•  Initially, vaulting poles were made from stiff materials such as bamboo or aluminium. The introduction of flexible vaulting poles in the early 1950s, made from composites such as fibreglass or carbon fibre, allowed vaulters to achieve greater heights.
•  Only three women have cleared five metres: Russia’s Yelena Isinbayeva and the two Americans, Jenn Suhr and Sandi Morris. The World Record is held by the Russian at 5.06m.
•  A number of elite pole vaulters have had backgrounds in gymnastics, including Yelena Isinbayeva.