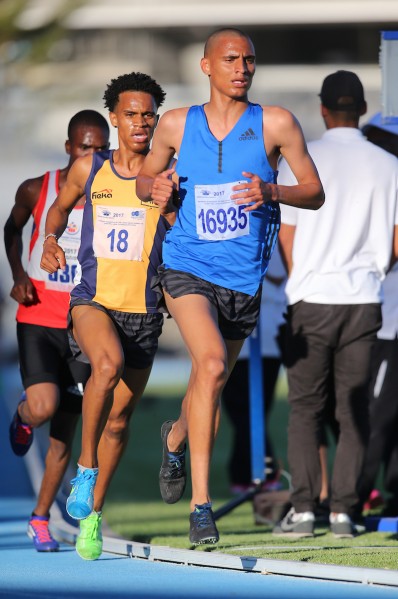 Trust the process, always bring the fire… that’s the attitude of two young distance running friends and rivals from Cape Town, Ashley Smith and Timmy Timoteus, who have both overcome difficult upbringings to chase success in running. – BY PJ MOSES

The action on the track has really hotted up in Cape Town in recent months, thanks in part to the efforts and attitude of two young guns of running. Ashley Smith posted the third-fastest time over 5000m in SA in 2017 with a blistering 13:55 personal best, while Anthony ‘Timmy’ Timoteus started this year with a sub-30-minute 10,000m on a windy day in the Mother City. Sometimes running against each other, sometimes helping each other push for faster times, these two young athletes bring a healthy friendship and rivalry to the track, to go with their incredibly positive outlooks.

Bring the fire
When he was younger, Ashley wanted to be a soccer player, so he enrolled at the Western Cape School of Sport, but says the coaches didn’t see any footballing talent in him. “They told me the soccer teams were full, so I tried out for running instead. I have no regrets about that now.” That saw him competing in distances from 1500m to 5000m as well as the steeplechase, and says, “I had a successful high school career, making the provincial teams every year, and that’s where I met Timmy and many of the other guys who are currently making their mark on the Cape running scene.”

His performances led to the offer of a scholarship to study at California Baptist University in the USA. “It was an amazing chance, and I’m glad I took it, but after one semester I knew that it was not for me. I decided to come back and rather focus on building a career and a life here, where my heart is. I felt I need to be an example and give back to my community, by showing them that even though life is not easy, success will come if you are prepared to put in the work. Before I left for America, people saw me running around Mitchells Plain and thought I was a bit nuts. Now they see me differently, and have become more supportive, and even cheer me on.”

Coached by Duane Fortuin, Ashley is aiming to qualify for some European races this year, and with the backing of Endurocad and mentors like Nolene Conrad and Elana Meyer, he says he is not putting limits on his dreams. “I am making a lot of sacrifices to reach my goals. I’ve always been very involved in the Cape Minstrel culture, which is an important part of who I am, but athletics has a limited lifespan and I need to put everything into it now. I take running personally, and the losses hit me hard, but also motivate me. Like American running legend, Steve Prefontaine, I am committed to pace, and there is a fast group of young guys in Cape Town now, so I believe that if we bring the fire, then the running world will burn.”

Trust the process
Bellville South is a hard place to grow up, and many kids from this area grow up without much hope of an escape to a better future. In contrast, Timmy always saw sport as his ticket out, and not just for himself, but his family as well. “It was never easy, but I kept going, because I knew this is the path that is right for me,” says Timmy.

“My first coach, Elton Esterhuizen, believed in me, after a lot of nagging on my part for him to become my coach, and he allowed me to express myself as a 13-year-old. I won all my cross-country and track races that year, and then I was offered a scholarship from two high schools, but I chose Bellville South High. I wanted to make a difference within my community, to inspire others and show them that nothing was impossible. You need to work hard to be rewarded, and I even ran from my house in Bellville South to UWC for training. People thought I was crazy, but I was just a kid working toward his dream.”

Timmy has had to overcome some hurdles along the way, notably when he was 17. “I made my first WP team that year, but it was also the year that my father passed away. I felt like all my dreams were coming to an end, but I was blessed with a second father figure and a new coach, Glenn Bentley. He kept me on the right path, and with his help and guidance, I am now a fourth-year student at UWC, something I never thought possible, and this year has started well.”

“I broke 30 minutes in the 10,000m at Green Point, with Ashley’s help, and I have been selected to go to Switzerland with the SA University Team later this year. Trust the process is my motto, because I have faced setbacks, but I always remember that your current situation is not your destination. This talent that I have been blessed with won’t be realised if I am not willing to work hard and sacrifice for it.”