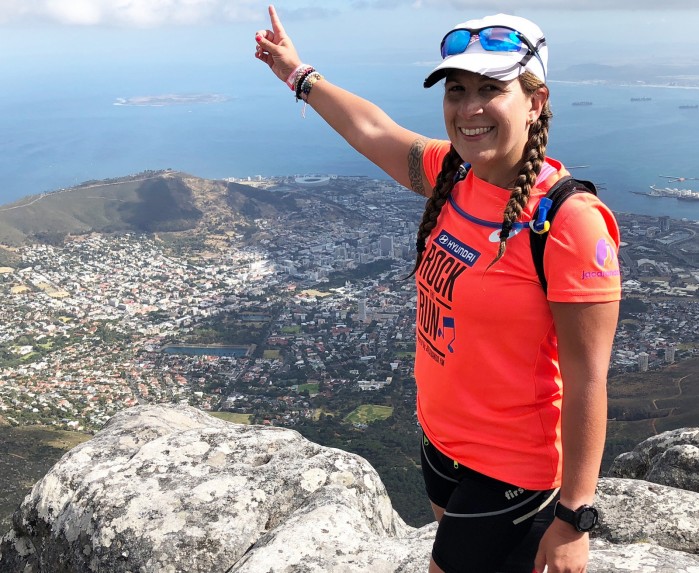 When the surgeon says you shouldn’t be alive, you know you’ve had a narrow escape, says Wendy Seller, and when he adds that it’s probably only the fact that you run that you survived, you find extra motivation to keep running! – BY SEAN FALCONER

It was two weeks after her first 42km at the Sanlam Cape Town Marathon last September, and Wendy Seller’s thoughts were already on her next race. Her goal was to fit in five more half marathons by November in order to celebrate the one-year anniversary of her first 21km by running her 21st half at Soweto, and she had several pre-entries lined up for the various races she intended running… but something was not quite right.

The 39-year-old Johannesburg-based graphic designer and mother of two young boys, Diego (10) and Rocco (5), had struggled with various injury niggles all along her right side for several months before the marathon. “I think I picked up the injury at the MTN Half Marathon in June, and that led to a never-ending battle, because the injury kept moving up and down my left side. Then I woke up one morning and my left side felt lame. The chiro realigned my hips, and like a typical stubborn runner, I said I was doing that marathon, whether I run it or crawl it on my eyelashes!” says Wendy.

She ended up running the marathon with her whole side taped up under her running kit, but says she still managed to dance at all the water tables and have a real ‘jol’ the whole way. “I ran it solidly, and did much less walking than I expected, but hyperventilated at the finish. At the time I thought it was due to the excitement of finishing my first marathon, but it turns out it was actually due to too little oxygen.” And things were about to get a lot worse.

Mystery Symptoms
Two weeks after the marathon, she woke one Sunday with a sore neck and shoulder on the left side, which she put down to having slept badly. “I also had a headache and was off-colour, but didn’t think too much of it,” she says. “On the Monday it was still there, so I decided not to run; Tuesday there was no change, and there was now a constant headache behind my right eye. On the Wednesday I played golf with the kids, who were on holiday, and on the way home I stopped at the chemist for an anti-inflammatory. That afternoon I started to swell, getting puffy around the jaw and collar bone, which I thought was just a side-effect of the anti-inflammatory.”

The following morning she took her car in for a service, then Ubered home, where she saw herself in the mirror and realised she was now so swollen that she couldn’t make out her jaw line or shoulder, due to a massive fluid build-up, so she decided it was time to see a doctor. All the tests seemed normal, and the X-ray just showed fluid, so the doctor couldn’t pinpoint the problem and scheduled Wendy for a sonar at 2pm that afternoon. “I phoned my mom to fetch me, as my car was at the mechanic, and we drove there in heavy rain that afternoon.”

“They did a quick scan of both sides, and I then had to wait an hour for the results, but eventually they gave me a little brown envelope and said I must go straight to my doctor immediately. As my mom reversed out of the parking lot, my doctor phoned to say it was an emergency and that I must get to Sunninghill Hospital urgently, because the surgeon was waiting for me. My 70-year-old mom grabbed the envelope, then took off. I’ve never seen her drive like that – she even ramped pavements, which the kids thought was very funny! Meanwhile, I googled a deep vein thrombosis in the carotid artery… It said survival prospects were 0%.”

Trying to Stay Calm
When they arrived at the hospital, Wendy told her mom to take the kids home while trying not to panic in front of them, and called her friend Sandy to come help her. “She filled in the forms as they put sensors all over me and took 26 blood samples to test every marker in my body! At 5pm the surgeon came to see me and spotted that I had no vision in my right eye, which he said was due to the limited supply of oxygen my brain was receiving. I hadn’t even noticed – instead, typical runner, I actually asked when I would be able to run again. He just laughed, and said he should have known I would ask that, since he was also a runner, then said, ‘You will run again, but first we need to save your life.’”

Wendy was told she would go into surgery on Friday afternoon and was put on blood thinners, endured numerous injections in the stomach and made to drink a lot of water. Unsurprisingly, she barely slept that night. The next morning, the anaesthetist came to check on her prior to the operation, saying she was third in line and scheduled to go in at 1pm, but she says he kept looking at the monitors. “Fifteen minutes later I was in theatre. I didn’t know it at the time, but he had spotted my oxygen levels dropping at a rapid rate. I was literally dying in front of him!”

The surgeon did an angioplasty through her arm in an operation that lasted three and a half hours, and when she came round again, he came to see her. “He told me only God knows how I was still alive, because the blockages appeared to have been there before the marathon. It turns out I was born with some veins and arteries in the wrong place, between my ribs and collar bone, so every time I moved my arm I would pinch them. However, the body adapts, so I had grown many smaller capillary veins to compensate. He said that probably would have given me problems later in life anyway, but the real problem now was the birth control pill I was on to maintain a normal cycle. It had caused microscopic blood clots, which had built up and begun blocking these tiny capillaries, so I had no bloodflow and oxygen on my left side from my throat to my elbow. He said he didn’t know how I had survived, let alone run a marathon, but that my running fitness had probably saved my life!”

Back on the Road
Thanks to that fitness, Wendy bounced back from the operation quickly. By the following Tuesday she was already driving her kids to school, and the next day did her first walk, but to her great regret, she had to ask her running friends to sell all her half marathon pre-entries lined up for the next few months. Another operation followed 20 days later, to remove the rib that was pinching her vein, and she says that actually knocked her more than the first operation. Still, she was walking again soon after the second op, and walked her first parkrun 5km four weeks later.

She then ran the Pirates Hat Race in Joburg, followed by the Gansbaai 10km down in the Cape while on holiday, but says it was an interesting experience. “I actually managed to run most of it, but with a different posture. I had been hunched and slouched, due to not getting enough oxygen, and that had led to the injuries, because I was dragging my legs.” She then did the Dis-Chem 5km Dash in Joburg, the Randburg Valentines 10km and the new Hot Legs 15km race as she steadily built back up to fitness. “I can run fairly hard again, but have to run consistently so as not to spike my heart rate. I’m just enjoying the time on my legs, and finishing races with a smile on my face.”

Doing Things Differently
These days Wendy wears an ICE band on her wrist with her brother’s contact details, in case anything happens while she is out running, and she says she has been amazed by the phenomenal support her running family gives her. “We have a WhatsApp group where I let them know when I am going running, and they check my Strava results, and encourage me. Also, thanks to social media, my running club and running friends, I can’t go anywhere without people hugging me and saying welcome back, and how surprised they are to see me running again so soon.”

“I’m actually more determined than ever to run… it is hard to accept eight minutes per kay when I can remember flying at 5:45 per kay, but I’m getting there bit by bit. Fortunately, I’m off the blood-thinners now, which had side-effects that included low energy, fluid retention, and sore bones in my feet, and my blood tests show that the markers for blood clots are gone. Added to that, I am watching my diet carefully and trying to get more sleep.”

Unsurprisingly, this frightening near-death experience has made Wendy rethink a lot of things about her life and attitude, and she says she is doing things differently now. “I could have gotten out of bed one morning, dislodged a clot, and died on the spot, or during a race. It made me realise that my life had been passing me by, and that life is there to be lived, so whether you choose to climb a mountain or take up painting, or run marathons, you should just go for it.”

“It’s given me a new lease on life, and I’m now doing much more with my boys, going on new adventures, and giving them more time. I’m also encouraging them to run, and we do parkruns together as well as the Zoo Trot events each month. Overall, I’m no longer focused on having the right house, a pool or car, but on quality of life and relationships. And if my story and my new attitude can inspire one other person to get off the couch to take up running, then I will be happy.”