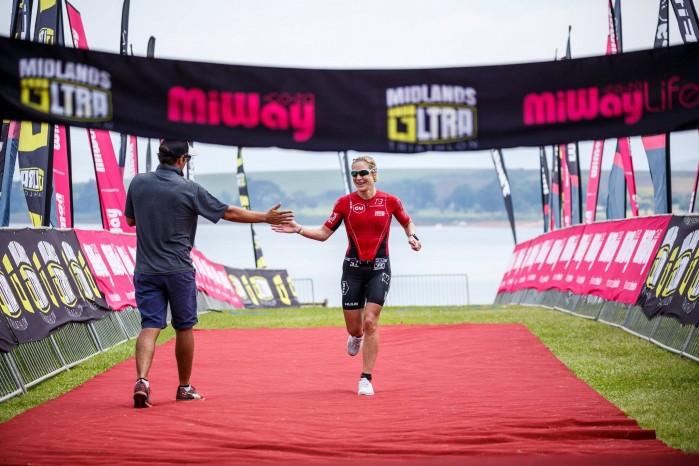 Many athletes dream of turning pro and making a career out of their favourite sport. They know it will take hard work and discipline, but the thought of getting paid to train and race is just so appealing. However, only a handful of endurance athletes actually achieve that level. One who has made the dream come true is Annah Watkinson. Well, almost… because she is still holding down a full-time job in the finance world on top of being a pro triathlete, so she has two demanding jobs! – BY SEAN FALCONER

The seed was planted in 2015, at supper the night before the Full Ironman in Port Elizabeth. Annah had finished fifth overall and first age grouper at the Ironman 70.3 in East London a few months earlier, and her coach, Raynard Tissink, mentioned that she should consider turning pro, since she was already the age grouper to beat in SA long distance triathlon. However, Annah says she wasn’t convinced. “I told him, let me just get through tomorrow, and then we can talk about it.”

She went on to win her age category again, coming home eighth overall and qualifying again for the Ironman World Champs at the end of the year in Kona, Hawaii, and so she decided to see how that went before deciding about the professional route. “I decided that if I won my age category in Kona, I would turn pro. I didn’t have a great race overall, finishing third in my category and 23rd overall, but as Raynard will attest after all his Ironman races, you can train hard, but the perfect day rarely comes, and you just have to push through. At the same time I was having to make hard decisions about work and life, and after a lot of talking, I decided to take myself out of my comfort zone and race in the pro division, but still keep the day job.”

Annah (36) grew up in Johannesburg, earning provincial colours in gymnastics while at school and went on study chartered accountancy, then became a CFA (certified financial analyst), and is currently Head of Global Finance for the Coastal Region at ABSA Investment Banking. She says investment banking is a demanding, high-pressure line of work, but she is managing the workload on top of the tri training. “Fortunately, my job requires deliverables, so I can adjust my working hours as long as I meet deadlines, and can invest time in both careers. Still, people sometimes think things are easy for me, but it’s hard to do both full-time, so the cracks are starting to show a bit. Sometimes things are unbearable, but at other times they bring me incredible joy.”

Starting Out
Annah was a relative latecomer to triathlon. She only took up running in 2008, aged 26, then tried her hand at triathlons in 2011, completing the Ironman 70.3 in East London. She went back in 2012 and won her age group with an overall top 10 finish, which earned her a slot for the 2012 70.3 World Champs in the USA. In 2013 she missed East London after breaking her wrist and collarbone in a crash near the end of the 947 Cycle Tour, so raced her first full Ironman in PE instead. There she won her age category and earned her first qualifying slot for Kona, but decided she wasn’t ready for that yet. She also raced for South Africa at the 2013 ITU Long Distance World Champs in France that year.

In 2014 she once again won her category at Ironman SA, then did the Ironman-distance Challenge Roth in Germany as build-up to Kona and finished eighth, giving her great confidence ahead of her Kona debut. However, another bike crash while training in the Cradle resulted in another broken collar bone, just three weeks before Kona! “The trip was booked, so I still went and watched my friends compete. It was horrible up to race day, but I actually enjoyed watching the race, and the trip really helped me a lot to find the best accommodation and location ahead of going back in 2015,” says Annah.

Highs and Lows
Having turned pro, Annah says she really enjoyed 2016, as she was never outside the top 10 in all her races. Besides smaller, local races, she finished third overall at 70.3 East London, placed second on her birthday at Ironman Lake Placid in the USA, was third at Ironman Barcelona, and also took eighth at Ironman SA. She qualified for Kona again, but decided to skip the World Champs that year. “I decided to wait, because I hadn’t been as competitive as I wanted at Ironman SA, even though I did well in very competitive races in Barcelona and Lake Placid, racing some top girls. Kona is so highly competitive, with the top 20 girls all capable of winning on the day, so I first wanted to prepare more.”

Ironically, while a lot of people tell her that 2017 was another successful year, Annah says she feels it was a terrible year. “I was fifth in East London, but didn’t finish the full in Port Elizabeth due to illness. I just couldn’t get any nutrition down and was vomiting on the bike, so I bailed after four hours. It was my first ever DNF, having never understood how people cannot finish a race, and I found the emotional pain of pulling out far outweighed the physical pain, so I questioned my decision. You sometimes see pro’s bailing a race in order to save themselves for another day, and I never wanted to fall into that category.”

With all that training done for Ironman SA, Annah decided to put it to good use and went to race Ironman Brazil. She had a much better day out, finishing seventh in a brilliant 9:04, just two minutes behind the fourth-placed woman, but she returned to a life turned upside down. “I moved to Cape Town to start my current job that same time, so my house was packed up and moved while I was in Brazil. I arrived back to a new life and new job, and had to re-establish myself. In Joburg, everything was close and familiar; now I had to go find everything.”

Meanwhile, she was doing a lot of travelling, racing five Half Ironmans around the world from July to September, and that made things still more challenging. “My bike was damaged twice in one month and all that travelling was emotionally draining, but what got to me most was not seeing the results of my hard work, which was a bit demotivating.” Then she went to Ironman Taiwan, arriving a week early to acclimatise, and felt a niggle in her calf, but decided to still race. “I felt in great shape, and typical athlete, I thought it was just in my head. I had a good swim, but running up the beach I heard a pop and felt my calf go. I couldn’t believe it, so just walked slowly to my bike. I had a great ride, climbing to third position, but 3km into the run I realised I was going to do huge damage and bailed. Nobody can believe I got through the bike leg with a torn calf!

Change of Attitude
The one good side to the injury was that it allowed Annah time to settle into her new job and home. “I had begun to feel like a mother who feels guilty for working and not spending enough time with her kids. I also realised that I have been lucky in life – what I put in has always been reflected by the results – but 2017 was the first year I didn’t see that. I think every athlete needs to go through that, and it was a period of emotional growth for me, so I came into 2018 feeling much more positive. I realised that four plus five equals nine, but so does six plus three. In other words, there are different ways of getting to the same result…”

Bolstered by her positive new outlook, Annah retained her title at the recent MiWayLife Durban Ultra, and looking ahead, her goals are to race Ironman South Africa and a few other 70.3 or full events in order to get enough points to qualify for Kona. “I’m thinking about heading to the USA for Ironman Texas, because it’s also the North American Champs, so it’s a high-scoring event,” she explains. Her other goal is to qualify for the Ironman 70.3 World Champs, which will take place in South Africa this year. “I tend to do better over longer distances than that, but I still want to give it a good go. I’ve noticed that there is a lot of excitement about the event building amongst the international pro’s, and everybody I know is taking up slots for the event. The added bonus will be how easy it will be to get to the race, instead of the usual long trek.”

Another factor counting in her favour for 2018 is that Annah is clearly in the form of her life. “People keep asking me what I’m doing differently, because my whole body has changed, but it’s thanks to consistency and progression over time. I do two sessions of training in the mornings, then put in a full day’s work, followed by a third session in the evening. It’s hard, but I always feel amazing afterwards, and I always remind myself of these words: If you choose to sit on the couch, remember it is your choice, so be OK with it. Or get off the couch.”

“My goals have steadily changed, from just finishing my first tri, to beating certain times, to beating others, to qualifying for Kona. When I turned pro, I asked Raynard, on my best day, do I have the ability to win an Ironman and finish top 10 in Kona. His answer was yes. I won’t be pro for the rest of my life, but I am willing to risk failure as well as open myself to great success. I want to walk away feeling I left my greatest race out on the course. I haven’t done that yet.”