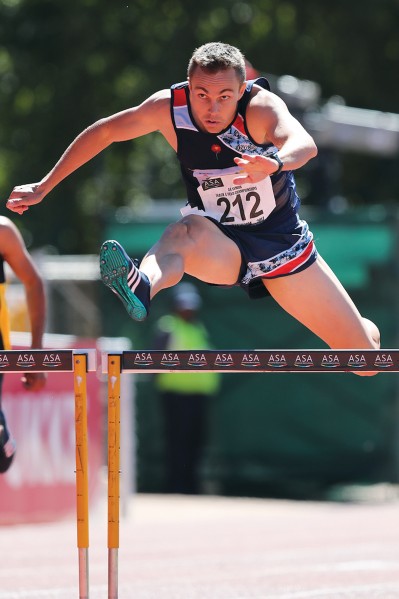 If LJ van Zyl can win a medal at the 2018 Commonwealth Games in April in Australia, it will be a magic ending to an athletics career that has spanned more than 15 years and delivered many records, medals and memories. – BY SEAN FALCONER

At 32, LJ van Zyl is now one of the elder statesmen of the track. The SA Record Holder in the 400-metre hurdles (47.66 seconds) has represented South Africa at the Olympic and Commonwealth Games three times each, and been to the World Champs six times, but it’s his medal haul that really cements his place as one of the all-time greats. That includes a gold medal and world title at the 2002 World Junior Champs, gold at the 2006 Commonwealth Games, silver and bronze at the 2011 World Champs, and many more.

Now perhaps coming to the final years of his competitive career, LJ says these days he just looks forward to being on the track with the world’s best. “When I was young, everything was about winning. It was like full-out war out on the track, and if you lost, you felt like a failure. But you start to realise that athletics should not just be about winning. Yes, it will always be important, and making money is also essential, but being an athlete is part of a journey. Savouring moments on and off the track is just as important as winning, because no athletics career lasts forever, and the friends I have made while racing all over the world is like collecting firewood for later in life.”

EARLY SUCCESS
Having won the World Junior Champs title in 2002 in Jamaica, LJ made his breakthrough at senior level in 2005, finishing sixth at the World Champs in Finland and taking the bronze medal at the World Athletics Final in Monaco, aged just 20. The following year he won his Commonwealth gold in Australia, in a then PB 48.05, and added a silver medal as part of the 4x400m relay team. “That was the cherry on top, and I still refer to that 4x400m final when I talk at schools, because it proved that no race is won or lost until you have crossed the finish line.”

“If you look at a video of the race, you would think there was no way that we could have won a silver medal, because I was running in fifth place coming into the home straight. There was no way through, so the only option was to go wide, and I can honestly say that in those last 50 metres I ran as I had never done before. Looking back, those two races at the Commonwealth Games set up my international career.”

More success followed in 2006, with a gold at African Champs and silvers at the World Cup and World Athletics Final. In 2007 he won gold at the All Africa Games, then retained his African Champs title in 2008 on the way to finishing fifth at the 2008 Beijing Olympics. In 2010 LJ won his third Commonwealth medal, a silver in India, but 2011 was undoubtedly the pinnacle of his hurdling career. In the space of just 95 days, he managed to break through the magical 48-second barrier four times, clocking the four fastest times of the year in the world, and went on to win the bronze medal at the World Champs in South Korea, where he was also part of the SA 4x400m relay team that won a silver medal.

FIRE IN THE BELLY
In 2012 he married SA long distance star Irvette van Blerk, after both had been part of Team SA for the 2012 London Olympics, and in 2015 their son Louis was born. In recent years, he competed at the 2016 Rio Olympics, but missed out on selection for the 2017 World Champs, even though he was still regularly competing in top level Diamond League meets around the world. Now, with his selection for the team to go to Australia, he feels the younger athletes should not underestimate him, because he still has the hunger for competition.

“To be honest, I love to race. There is something special about dueling with other athletes on the track and fighting it out right to the end. That is what an adrenaline rush is all about. I think I got addicted while I was still a ‘laaitie’ racing the farm workers’ children over feeding troughs. The faster and more experienced I got, the more I started to crave the challenge of a good race, so I’m looking forward to these Commonwealth Games.”