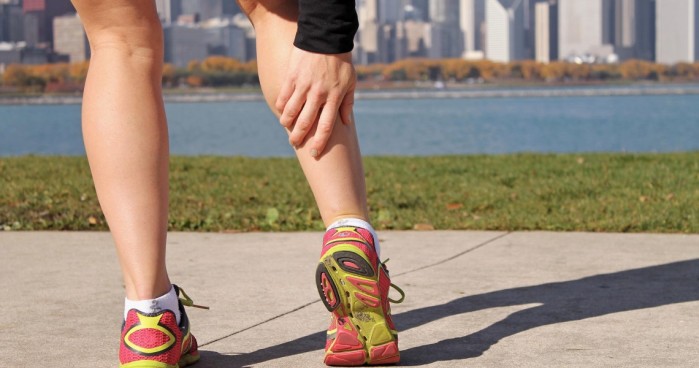 Exercise-Associated Muscle Cramping (EAMC) has a habit of sneaking up on even the best prepared runners. Here’s what you need to know. – BY ERNEST HOBBS

Although cramping can be experienced in most sports, it is particularly common in repetitive endurance sports such as running, especially in hot environmental conditions. Historically, cramps have been attributed to dehydration and a loss of electrolytes as a result of sweating, but the circumstances around EAMC are more complicated than that. Currently, two prominent theories are supported by research.

Electrolyte imbalance and dehydration theory: More recently, this theory has focused on dehydration, proposing that a significant loss of salt can only occur with a large loss of body fluid. As the body begins to dehydrate, there is a reduction in blood plasma levels. To compensate for this, water is taken from the intercellular spaces near blood vessels in order to maintain central blood volume. This results in the muscle becoming firmer and deforms the motor neuron axon terminals, causing the muscle to become hyper-excitable, a state in which a muscle is more likely to involuntarily contract, the end result being a sustained contraction, i.e. a cramp.

Altered neuromuscular control theory: Within the muscle there are two sensory organs. The muscle spindle reacts to stimulation by contracting, while the Golgi tendon organ reacts to stimulation by relaxing. As a muscle begins to fatigue during prolonged exercise at high intensities, the muscle spindle becomes more active, and the Golgi tendon organ becomes less active, resulting in the muscle becoming more and more likely to involuntarily contract.

Prevention
1 Cramp often sets in when exercise (race) intensity is higher than an athlete is accustomed to relative to training. Therefore, occasionally train at or near race pace.
2 High temperature environments increase the risk of dehydration. Prepare accordingly regarding hydration and electrolyte replenishing.
3 High sweat rates further increase the risk of cramps. If an athlete is known to have a substantial sweat rate, it may be necessary to ensure sufficient dietary salt.
4 Strengthening synergistic muscles spreads the work. A case report found that strengthening the gluteus maximus prevented cramping of the hamstrings, as the strain of exercise was shared more evenly.
5 Athletes returning from injury or prolonged rest are at higher risk of experiencing muscle cramps, and should systematically increase exercise intensity and exposure to heat.
6 Correcting technique and muscular imbalances and/or posture may reduce the risk of muscles fatiguing quickly.
7 Since shortened muscles in a contracting state have an increased risk of cramping, regular stretching may help muscles maintain a longer state.
8 Consume electrolytes and water when the early signs of cramp and fatigue present themselves. Once cramping occurs, it may take some time before this is able to help.

The most effective treatment of cramp remains stretching the muscle in a slow and controlled manner, as the Golgi tendon organ is stimulated to relax. It should also be noted that a history of cramps increases an athlete’s risk of experiencing cramping. This means that effectively treating a cramp in a race does not mean the cramp will not return later during the same race.

About the Author: Ernest is a biomechanical, video, and running gait analyst at the High Performance Centre (HPC) of the University of Pretoria.