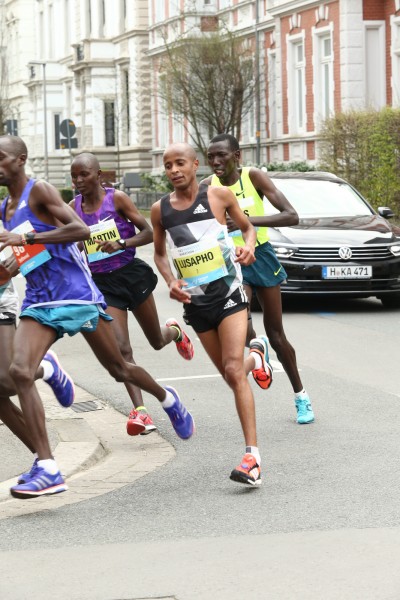 With a frustrating injury lay-off now behind him, Lusapho April is determined to get back to the world class marathon performances that saw him win or podium at Big City Marathons in Europe and the USA, as well as run in two Olympic Marathons, and it starts with the Boston Marathon this month. – BY SEAN FALCONER

Boston is not only the oldest Big City Marathon in the world, having been run for the first time in 1897, it is also one of the most prestigious, but getting into the starting field is not easy. As an average Joe runner, you need to qualify by running another marathon, and the qualifying time standards are pretty steep. A male runner in the 18-34 age category needs to run 3:05 or faster just to be considered, and even then your entry goes into a ballot system if there are more entries than spots available – which there usually are.

Another way to get into Boston is to be invited to be part of the elite field – as an IAAF Gold Label race, the Boston organisers needs to invite a certain number of elite athletes capable of world class times, from a certain number of countries – so to get an invite, you need to consistently be amongst the best in the world. It is therefore a real feather in the cap that 35-year-old South African marathon star and two-time Olympian Lusapho April will be lining up for his third Boston Marathon on Monday 16 April.

His previous two Boston runs in 2014 and 2015 produced commendable 15th and 12th positions respectively, and having recently returned to action after a frustrating injury lay-off for the last few months of 2017, he says he is aiming to improve on those results. “The injury is a thing of the past and I am ready to race. Hopefully my body will respond on the day of the race and I will do well,” says Lusapho.

“I want to improve on my previous performances in Boston, so I’ll be going for at least a top 10. The downhill course hammers your quads, but I know what to expect, and the races in the USA tend not to be fast from the start, more like a champs race, which plays to my strengths. It just depends which way the wind is blowing… the guys have run 2:03 on that course, but they had a strong tailwind that year. Both times I went there, we had no tailwind; it was just very hot or very cold.”

Running Talent
Lusapho is one of the quietest elite runners in SA – in terms of speaking. In fact, the phrase “under the radar” seems appropriate in describing his character, and he prefers to let his feet do the talking. That began in primary school, in Uitenhage in the Eastern Cape, where early success saw him selected for the Eastern Province under-13 cross-country team. In 1996 he started training with long-time coach and mentor Karen Zimmerman, joining her Atalanta Athletics Club training group in Port Elizabeth. She later became head coach at the University of Fort Hare, where Lusapho enrolled for a B.A. in Human Movement Studies. While there, he won numerous SASSU Student Champs titles and represented SA at the World Student Games.

Now based in East London, having followed Karen there, Lusapho says they’ve developed not only an effective working relationship over the last 23 years, but also a strong bond. “We’ve got a good relationship and I think we make a good combination. We don’t worry about the competition, we just think about doing better for us. But she’s never happy – even when I win, she always says I can run faster!” says Lusapho with a naughty grin.

Amongst his many running accolades are multiple Eastern Province and Border titles at both junior and senior levels in track, road and cross-country, and he was South African Junior Half Marathon Champion in 2001. He also medalled at both the SA Track & Field and SA Half Marathon Champs, was crowned SA Marathon Champ in 2011, and still holds the SA record for 25km. Added to that, he has represented SA in numerous international competitions, including the 2012 and 2016 Olympic Marathons – he finished 43rd in London, after taking a fall mid-race, and 24th in Rio – as well as the World Cross Country Champs and World Half Marathon Champs.

Big City Pedigree
However, it’s in the Big City Marathons where Lusapho has really made his mark. Besides those two top 15 finishes in Boston, he is the only athlete to have won the Hannover Marathon in Germany three times (2011, 2013 and 2016), with a PB of 2:08:32 run on that course, and finished third in the New York Marathon in 2013, followed by 11th place in the Big Apple in 2014. Then in the second half of 2015, he wanted to qualify for the SA Marathon team for Rio, so he went to the Berlin Marathon aiming for a fast qualifier, but was unfortunately forced to bail late in the race.

“Three weeks before the race I developed a niggle in my leg, and it just got worse, so I ended up DNFing in Berlin. I eventually bailed at 38km because I just couldn’t carry on. That meant I was under pressure in early 2016, but I knew I could clock a good time for Rio, so I went back to Hannover and won my third title there.” He duly represented South Africa in the Olympic Marathon, but says the conditions knocked the stuffing out of him.

“Rio was good, except for the humidity. I don’t like running in the heat, which is why the marathons in Europe and the USA suit me so well. They are usually quite cold. The Big City Marathons have also been good for my career. Winning Hannover opened doors for me, leading to invites to run in New York, Boston and Berlin, and I love going back there, because I am always treated well. The people in Hannover even recognise me now. But Boston is the big goal now, because I have not ran as well there yet as I think I can, and then I plan to run another marathon before the end of the year. I would love to go back to New York in November, Besides the wonderful race, I also love sightseeing in the city, visiting places like the Statue of Liberty, Empire State Building and Times Square.”

Coming Back from Injury
Following his good performances in Hannover and Rio in 2016, Lusapho was also selected to run the marathon at the 2017 World Champs in London, but an eleventh hour technical problem with his paperwork prevented him from travelling to London, and then he picked up the injury that put him out of action for the rest of 2017 anyway. Now that the injury is behind him, he says he is ready to push on again, and wants to repay the faith shown in him not only by Karen, but also his sponsors, adidas and Volkswagen.

When not running, Lusapho likes to spend time with his two daughters, Avuzwa (8) and little Aluyolo (eight months), with reading and sleeping filling most of the rest of his ‘down time,’ but there has been little of that lately as he has rebuilt his fitness. “We’ve been doing altitude training in Hogsback, at between 1500m and 2000m above sea level, and I’ve been doing up to 220km a week in peak mileage weeks, with two sessions a day. Most of my training in East London is on the road or track, because the city doesn’t have much in off-road options, but in Hogsback it’s great to hit the trails.”

A notable aspect of Lusapho’s career thus far has been his sparse racing schedule. Not only has he resisted the lure of the high-paying ultra-marathons that dominate the SA road running scene, but he also limits the number of local races he does, preferring to focus on quality training and a steady build-up to big goal races overseas. In contrast, many a promising young athlete in this country has burnt out quickly from over-racing, or moved up to the ultras at a young age and lost much of their natural speed. “I’ve got a few more years left in my legs to do well in marathons, and with the approach my coach and I are using, we’re not going to change anything, we’re going to stick to what works for me. I know what I’m capable of, and I believe in what we’re doing.”