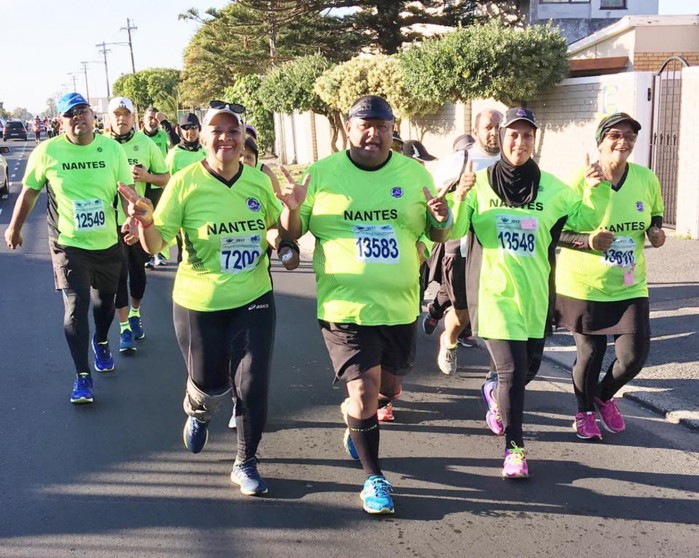 She was the victim of a brutal attack and shocking loss that would have left most people devastated, but instead it made Caroline Peters more determined to make a positive change in her own life, and in her Cape Town community, through running. – BY PJ MOSES

In 2014 Caroline Peters created a beacon of light when she started the Nantes Athletic Club. Not only did she give the community of Bridgetown in Cape Town an alternative way of becoming active, but she reclaimed a piece of herself by naming the club after an area in her neighbourhood that only had terrible memories for her. “There was never going to be any other name for me to choose other than naming it after the place where I was violated as a teenager and saw my friend brutally murdered,” she says. “Women don’t speak out about these things, and even though it makes me feel vulnerable, I feel that I must share to encourage other women to speak up against this ongoing evil in our society.”

In 1980, a then teenaged Caroline was out for a walk with two friends when they were attacked by a gang from a neighbouring township. The two young girls were gang-raped before all three young people were stabbed, beaten and left for dead. Caroline and the boy survived, but their friend died due to the severity of her injuries. “I wanted to do this in her memory, and in the memory of my father who always worked for this community, and believed that there was beauty and light here.”

Active Recovery
In spite of her shocking experience, Caroline recovered, and throughout her school years was an active sportswoman, earning provincial colours in netball, but as she became older and had three daughters, she gained weight and the stress of her work and personal life made hers an unhealthy life. “Years later, my daughter Zaida was pregnant, and I wanted to be an active grandma, not the fat grandma waiting in the easy chair for kisses from her grandchildren. So I went to Rondebosch Common in the evenings after work and would mostly walk at the beginning, before I started running from pole to pole,” she says.

“It took me four weeks to do my first 5km, starting from scratch. My eldest daughter Cindy says that I panted and sounded like somebody who was dying, but I was determined, and slowly built up my body to not only lose weight, but also become strong enough to run up to 5km without needing a walk break. Then, after much cajoling from my friend Fuad Adams, I decided to join Itheko Athletic Club and from there I fell in love with running and the fantastic vibe that existed between members of the running community.”

That saw Caroline build up her racing mileage, until eventually she was running marathons and ultras. “I have finished the Old Mutual Two Oceans Ultra in 6:54, and just missed the cut-off at the 80km mark during Comrades. I was in tears when that happened, because I went to Comrades with an injury and that was one of my biggest mistakes. Runners are always so desperate to run, and we do the silliest things while ignoring sound advice.”

Passing it on
Having come so far with her own running, and seen the benefits it brought to her life and family, Caroline decided she wanted to share the message with her community. “I was extremely proud of all I had achieved within 18 months of starting to run, so I decided I would pass on what I had learnt to others. This is one of the reasons that I first started a Nantes running group, and then a club. We also started a free weekly parkrun at Nantes Park, with the help of parkrun South Africa. The numbers are steadily increasing there as well, and whole families come together on Saturday mornings to up their heart rate the right way.”

Granted, Caroline has had to overcome a few injuries, as well as fight depression and serious health scares to continue her running journey, but none of that has deterred her, and she keeps on breaking new ground. “As a proud confident woman, I must keep breaking down those patriarchal walls put up to keep women from positions of power, not only in the sports that I love, but also in the broader society.” That attitude has seen Caroline rise to become a Community Liaison Officer in the Mayor’s Office, and she also serves on the Old Mutual Two Oceans Marathon Board.

As a result of her energy and commitment, Nantes AC has grown steadily, and according to Caroline answers a need in her community. Attitudes and mentalities are being changed, and the very fabric of township reality is changing with every new member who walks through their clubhouse door. “Now we can run right here in our area with no need to go far away to find someplace safe to run,” says Caroline. “This is what people need to know, and that is what I want my legacy to be: A constant, positive change that sweeps across the Cape Flats, to the sound of feet hitting tar!”