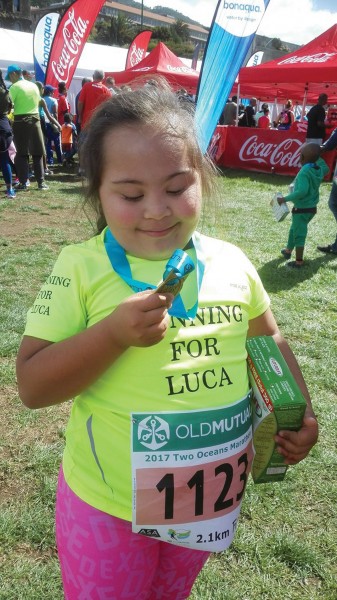 Born near Berlin in then East Germany, Katrina Muller escaped an oppressive communist regime and eventually ended up in South Africa, where she later took up running. Today, she is often seen at races in the Cape wearing her distinctive Running for Luca kit, named in honour of her daughter, and several running friends also race regularly in the distinctive shirts, to raise awareness of Children with Down Syndrome. – BY PJ MOSES

Born into a loving family home near Berlin, life was fairly good for Katrina until she got to high school and started to see the oppression that she and her fellow East Germans were living under. “The eighties were a turbulent time and I was becoming more and more active in showing dissent, along with many young East Germans. We were tired of being oppressed. Because of my activism, by the time I was 22 years old, when I was a young mother and my son Ivo was three, I knew I had to get out of the country, because they had threatened to take my son away if I tried to defect,” she says.

“In 1989, just a few months before the Wall came down, I took Ivo and escaped, with nothing to my name and only the clothes we had on. We travelled via Hungary to Hamburg, where we lived for 10 years, and then I decided to see what the rest of the world had to offer. We visited South Africa and I fell in love with this amazing country, and two years later in 2001, I returned to SA, over the Easter weekend, and I have stayed here since.”

BLESSED CHALLENGE
Katrina later married a South African and in 2008 her daughter Luca was born. As she says, life blessed her with a beautiful child, but also the tough challenge of raising a child with Down syndrome. “I was chosen to have Luca as my daughter. I think it has helped me become a better person, because I am more understanding, more compassionate, and just a little more patient than I used to be. She has been my blessing, and I appreciate what she has given me. I asked Luca one day what she wants to be when she grows up, and without hesitation she replied, ‘I want to be Luca.’ That melted my heart, because that is exactly what I want for her, as well as her younger sister Charly and my eldest Ivo. I want them to be the best version of themselves that they can be.”

Katrina says that taking up running was one of the things that helped her with the worries she had over Luca’s future, as well as helping her get into better physical shape to care properly for little Luca. It started in 2014, when she was helping the Down Syndrome Association of South Africa raise funds at the Cape Town Cycle Tour, and decided to enter the Spar Women’s 10km Challenge to raise further awareness of Down syndrome.

“I had no idea what I was getting myself into, because I had never run longer than 3km before, and back then even that felt like I was running a marathon! At the Spar race, I started right in front, where the elites are, which was a terrible mistake, because by the time we got to 500 metres I was already exhausted. It was tough, but I finished in one hour 14 minutes and was captivated by the whole vibe and the amazing feeling running gave me.”

BITTEN BY THE RUNNING BUG
She followed that up with her first 21km at the Slave Route Half Marathon, and did her first 42km at the 2015 Sanlam Cape Town Marathon. That race is her favourite running memory, because Luca and Charly were in the crowd next to the finishing straight. “When I saw them, I got very emotional. I took them from their Dad and held their hands as they joined me on the run to the finish. The crowd cheered loudly for them and I felt so proud! They both received medals, too, and it is a cherished memory for me. Marathon running is never easy, but these moments make it all worth it.”

Katrina’s goal now is to run more marathons, including the Berlin Marathon, which is obviously close to her heart because that’s where her roots are. “I want to run through the Brandenburg Gate on race day, with crowds cheering my every step, because in the years before I escaped East Germany, armed soldiers would have shot you down if you even tried running there. Just imagining it now gives me goosebumps.”