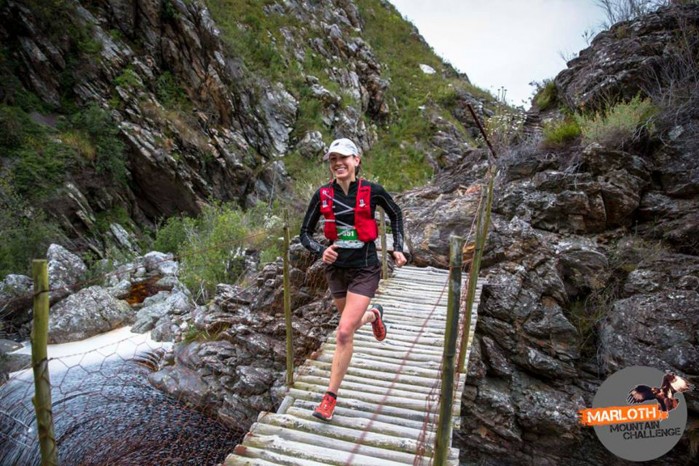 Thanks to a number of high profile race wins over the last few years, medical student Annamart Laubscher has made a name for herself in SA trail running, and yet she still sees herself as an amateur runner lucky enough to share the trails with the best in SA. – BY SEAN FALCONER

Take a look through the 2016 and 2017 results of some of the high profile trail races in the Cape and you’ll see the name Annamart Laubscher pop up regularly. Having already won a number of races in the previous few years, in 2016 she won the Sanlam Cape Town Peace Trail Run as well as the Jonkershoek and Marloth races in the Mountain Challenge series, and the Bastille Day Trail Run, and she added a second place in the Redbull Lion Heart Challenge. Then in 2017 she retained her Peace Trail, Jonkershoek, Marloth and Bastille titles, added the Old Mutual Two Oceans 24km Trail Run and Lion Heart Challenge titles, and in December rounded off a great year with first place in the Ultra Trail Cape Town 35km.

Along the way, she beat some of the leading names in women’s trail running in SA, but Annamart remains incredibly humble about her achievements, even showing surprise at being asked for an interview. “Those women have a lot more kays on their track record and a lot more racing experience, and I am just a junior compared to them, just a plain Jane runner, so I still look up to them,” she says.

FITTING IT ALL IN
The other really impressive part of 23-year-old Annamart’s racing success is that she only runs when her hectic medical studies allows. She is currently in her sixth and final year at Stellenbosch University, and this year is based at the Worcester Provincial Hospital. “Tygerberg Tertiary Hospital is over-staffed with students, so I applied to do my sixth year externally, and I chose Worcester. Being here means a lot more self-studying, which is more taxing time-wise, but practically you learn more, which I think will better prepare me for my two internship years and community service year. It’s the harder route, but I think it will pay off.”

One of the bonuses of working in a provincial hospital is that Annamart will not only rotate through the different departments, but can also volunteer to work extra hours so as to gain experience, which should help her decide if there is a specialist field she would like to pursue. “I don’t see myself being just a GP for the rest of my career, but I’m still deciding about a speciality direction. They say you only really know during your internship years,” she says.

However, those extra hours can put a dent in her training time, as does the often hot weather in Worcester, but she says she has adapted her running plans. “Time is a challenge these days, but it’s cooler in the mornings and evenings anyway, so not such a problem being so busy during the day. I just try to run most days and stay active, because I have always found that running augments my studies. It’s a good balancer to get outdoors after working and studying indoors.”

MULTI-TALENTED JUNIOR
Born and raised in Somerset West, near Cape Town, Annamart’s sporting career began in 2008, when she was in Grade 7, with mountain biking, road cycling, and both track and cross country running, which led to multisport as well. As a junior she earned Boland and Western Cape colours on track and in cross country, was runner-up at the SA Triathlon Champs in 2009 and 2010, won her age group at the WP and SA Duathlon Champs in 2011, and went on to represent SA and finish 16th at the World Duathlon Champs.

However, she had to cut back on her sport when she began studying in 2013. “It was hard to fit in swimming, and dangerous to cycle in the Parow/Bellville area, so I turned my focus to trail running. When it came to racing, I started with 10 to 12km, then upped it to the middle distances around 20 to 25km, but I was scared of going further until last year at Ultra Trail Cape Town, when I did the 35km. I think I paced myself well, and actually enjoyed it a lot, because you can relax a bit more over the longer distance, as you go at a slower pace than 10km.”

Looking ahead, Annmart says her 2018 racing plans are very similar to 2017, but it will depend on her studies. “The last year of medicine is very demanding, and I want to finish my degree well, so I don’t want to be over-ambitious with my racing goals. Of course, it would be amazing to take a gap year in 2019 to travel the world and see where my running takes me, but we have to do our three years working for the government straight after studies, so a running gap year is just not possible. Still, even though I have no idea where I will be placed next year, I will carry on running.”