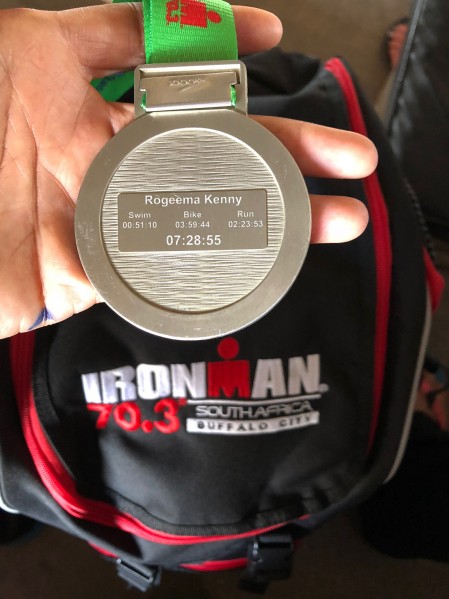 Having recently finished her first Ironman 70.3 race in East London, Rogeema Kenny has not just done something she once thought she couldn’t do, she’s done something that many people said she shouldn’t do. Fortunately, she didn’t listen to either opinion! – BY PJ MOSES

Rogeema Kenny does not like to be told that she can’t do something just because she is a woman. “I hate that society has put limits on what is acceptable for women and girls to do, or what to strive for. There should be no limitations for anyone, men or women, we should all be able to do what we feel we are able to, as long as it does not negatively impact anyone else’s life,” she says.

A qualified electrical engineer, she spent 10 years in the energy industry before changing to management consulting, because it felt more in line with her personal ideology about being a game-changer and a societal boundary shifter. And that is what she has become since taking up running, and later triathlon, but it initially just started as a way to stay fit. “Early on in my working life I started running with my sister, Fadeelah, to keep fit. However, I did not feel any love toward running as a hobby. In fact, I found it tough going and extremely uncomfortable, but what kept me going was this incredible sense of achievement after every run. I pushed at the imaginary boundaries that surrounded me. This was the same drive I felt when I achieved my Second Dan black belt in karate years before.”

As is the case with many runners who step up to the longer distances, Rogeema struggled during her first marathon. “At my first marathon, the Peninsula, I wanted to do well, and even though it felt great getting to the finish, I couldn’t break that magical five-hour mark. I made myself a promise that I will train harder and return stronger.” Clearly the promise worked, because later that same year she ran her second marathon and took more than an hour off her previous time!

“With a qualification for the Two Oceans 56km in the bag, I jumped into my next challenge of doing an ultra. I trained hard and successfully completed the Two Oceans, but still I needed something more… and found something that was not expected as the logical next step. My friend Jacques suggested I try my hand at triathlons, and I was intrigued, but also very sceptical. This would be a major stepping stone into the unknown, because I could not swim, and I definitely was not a cyclist!” Nevertheless, in May 2014, four years after starting to run, Rogeema lined up with Jacques at the start of her first triathlon, an off-road event in Durbanville.

DOUBLE CHALLENGE
Being a triathlon newcomer was hard enough, but being a devout Muslim woman made things all the more challenging for Rogeema. “I spent over twenty minutes in transition each time because I had to stay covered the best I could while readying myself for the next stage of the race. I knew after the race that I was going to have to do a lot of research if I wanted to make things easier for myself. There was nobody that I could ask for advice or for guidance, because there were very few Muslim women doing triathlon back then, if any. I especially needed to sort out the clothing, because you need something practical that won’t hinder your progress. You can’t swim in a doekie!”

Rogeema says that event organisers have been very understanding and she’s never had a problem with officials regarding her religion. The tri community has also been wonderfully supportive, and she now sees them as an extension of her family, especially the Atlantic Triathlon Club and the Embark triathlon training group that she is a part of. However, she has received some push-back from members of the Muslim community who feel that triathlons are not a sport Muslim woman should be taking part in…

“It is a question of balance, in my opinion, between my spiritual life and my physical pursuits. I don’t think I could do one without the other. People may judge me, but I am not doing it for them, and I am not harming anyone in any way, but I am building myself into a stronger and healthier human being. I don’t always handle the negativity as well as I should, but I try to steer clear of those who judge without understanding. I want to educate people that sport is important and that it helps you in all aspects of your life. It changes you as a person and helps you to find the courage within yourself that you didn’t even know existed.”

STEPPING IT UP
Just as had happened in her running, Rogeema found that first taste of triathlon just made her want more. “I knew that I would want to step up a level one day and go on to do the Ironman race, but initially I kept putting my Ironman entry off, until last year I eventually decided to just go for it, and I put in the work needed to be successful at it. It took me a while to get to the Half Ironman 70.3 distance, but it was all worth the effort in the end.”

“The feeling of standing on that beach in January, looking out at the ocean, was indescribable, and I felt very excited about the challenge that lay ahead. I think that is one of the reasons I love the structure and intensity of the training programmes that triathletes put themselves through. It takes away most of the butterflies and doubt on race day. It leaves you with an excited anticipation of the adventure that lies ahead of you.”

“Today I look at my medal and I know that I have finished one of the toughest things I could ever try and do. Months of preparation and sacrifice went into that event, and the emotion of those last few kilometres of my run were so heavy that I wanted to choke up with each step that I took closer to the finish line. This achievement, for me, is up there with finishing the Two Oceans Ultra. It is an empowering moment that I savour.”

GIVING BACK
The journey from Karateka to runner to Ironman triathlete has been an eventful one for Rogeema, and at times a lonely one. Today, she sees herself as an example to women, especially young women, who want to follow a more active lifestyle, and thus she has become active in the Dreamgirls mentorship programmes. “Young women need positive role models and people who can identify and nurture their potential. It took me a while to talk about my sport in public, but since I have done so, many girls have come up to me and said that they feel empowered by my story.”

“All women should use their experiences to help other people, especially young girls. They shouldn’t believe that they can’t do things just because other people can’t do it. There must be a first person to do things, and if what I do can benefit somebody else in their lives, then that is a good reason to keep on doing it. I believe that you must know what you want, have a clear idea of what it will take to get there, and be prepared to do whatever it takes, because nothing worth it is easy. At the end of it, when you achieve that goal, all the sacrifice will have been worth it. The person that starts is not the same person that finishes the race. It transforms you and will make you stronger and better than you were before.”