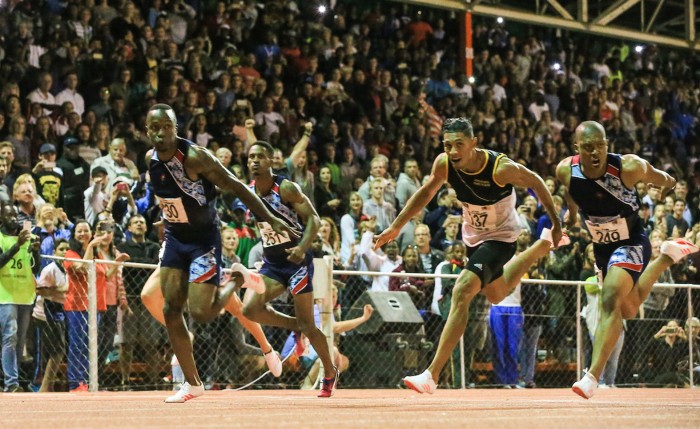 Since breaking the magical 10-second barrier in the 100m for the first time on 1 July 2015, Akani Simbine has dipped under 10 seconds on a further 14 occasions. No other athlete in the history of South African sprinting can lay claim to that, and this year the 24-year-old sprint sensation is looking to add some titles to his name. – BY MANFRED SEIDLER

Akani Simbini has one thing on the mind: He just wants to race. “That’s what we are here for. I don’t want to see a situation where the top athletes avoid each other until a big championship. I remember the days of Carl Lewis, Ben Johnson and Linford Christie. Those guys raced each other time and again, and people came out to watch and were excited about the sport then,” he says. “We must do the same now, and I want to line up with Trayvon Brommel, Christian Coleman and Julian Forte as well as our own sprinters.”

Disappointing Year
When you meet Akani, you are immediately impressed with his quiet, yet confident demeanour. At 174cm, he cuts a figure that you immediately notice, whether he has just stepped off the track or is relaxing in casual clothes. There is an aura around him, and he oozes confidence, knowing full well that he is one of the best sprinters in the world… and that’s why 2017 was a bit of a disappointment, in his books. “After 2016, when I got to the final of the Olympic 100m and finished fifth, for me 2017 was about the start of my medal and title campaign.”

The year definitely started with a statement of note as Akani clocked 9.93 in his opening race in Pretoria in March, something the South African public was not used to seeing. Traditionally, sprinters open a season with a low 10 and then try and bring that time down as the season progresses, but not Akani – he believed he could go under 10 from race one. However, shortly after that race he picked up a niggle in his hip flexor that would just not go away.

“At World Champs in August it was really bad. I would take my second step out of the blocks and I would feel intense pain, and for the rest of the race in round one I was thinking about the pain. Normally we don’t think about anything in a 100m race. We execute. So for me to be thinking about the pain, that was bad.” Akani clocked 10.15, his worst race of the season, but still progressed to the semi-finals. “Even in the semi I felt that pain, but was able to control it better.” He duly ran 10.05 in lane one to secure a berth in the 100m final, where he again finished fifth. “That final was so weird. Bolt getting beaten, Gatlin getting booed, and none of us seeing Gatlin come flying through on the outside… That was not how I saw my World’s going down.”

Long Season Ahead
As a result, 2017 was a bit of a letdown for Akani, but he feels that it has prepared him well for 2018. “It would have been nice if the hip flexor had given me grief in a Diamond League instead of at World’s, because I am convinced I would have come back with a medal, but the experience has made me so much stronger, and now I just want to race.” That said, he admits 2018 is going to be a long campaign, but he says he’s ready. “I start in March and race all the way through to September, and this year I want titles. The first is the Commonwealth 100m Gold in Australia, then I want the African title in August. I am the fastest man in Africa, but want the title to go with it, then a few Diamond Leagues, but the big focus at the end of the year is the Continental Cup in Ostrava. I want those titles.”

The Continental Cup is the old World Cup, a competition held over two days that sees continent take on continent, which means that Simbine will need to win the African title, as the continental champion will represent at the meet. In the meantime, he will race on the 8th and 22nd of March in Pretoria and Paarl at the new Athletix Grand Prix meets, and defend his title at Nationals in Pilditch on the weekend of 15-17 March. He adds that we can expect a replication of 2017’s ‘FillUpPotch’ campaign for the Nationals in Pretoria. “Most definitely! It worked. I have never raced in front of such a big crowd in South Africa, and we want to do it again. We want South Africans to see we have world class athletes competing here at home.”