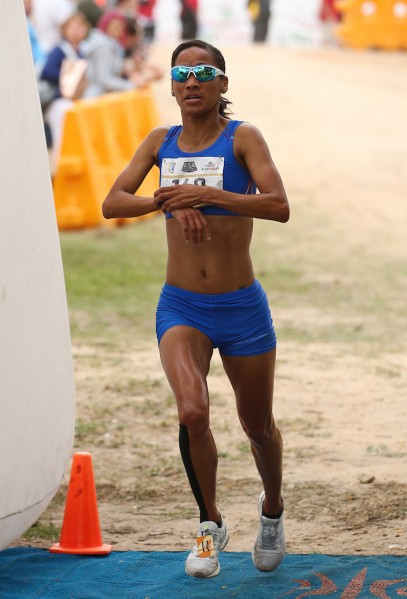 Having won six SA titles, represented her country more than 10 times, and become a regular on podiums throughout the country, Nolene Conrad has established herself as one of SA’s leading female long distance athletes, but running has brought her more than just success, it also saved her life. – BY SEAN FALCONER

Nolene Conrad is the picture of health and fitness as she bounds into the dining hall for our interview at the Stellenbosch Academy of Sport (SAS), where she works as Athlete Manager for Elana Meyer’s Endurocad and interns on the Sanlam Cape Town Marathon organising team. The 32-year-old recently returned from a month of high altitude training in Kenya to prepare for the World Half Marathon Champs in Valencia, Spain on 24 March, clearly the trip paid off: She clocked a blistering 1:13:05 to finish first woman and ninth overall in the Peninsula Half Marathon in Cape Town on 18 February, just 17 seconds off her PB.

In that kind of form, 2018 looks set to be another great year for her after a brilliant 2017 season. That included finishing runner-up in the Old Mutual Two Oceans Half Marathon, ending third overall on the points table of the Spar Grand Prix Series, and taking 12 minutes off her marathon PB at the Valencia Marathon in November, clocking 2:35:21, the fastest time by a South African woman for the year. She also added still more podium positions and national champs medals to her collection at various SA Track and Field and Road Running Champs, so it’s hard to think that there was a stage when the doctors didn’t think she would make it past the age of 21.

OXYGEN STARVATION
While growing up in Cape Town, Nolene was diagnosed with asthma at age 13, and was constantly in and out of hospital. “My asthma pump became my lifeline, and I slept with one under my pillow, as I often woke up during the night unable to breathe. One night when I was 16 I had a really bad attack, and when I tried my pump, it gave two squirts and ran out. I went to find the spare, and it was also finished, so I woke my parents in a state of panic,” says Nolene. “We didn’t have a car back then, so they called an ambulance, which took some time to get there. I passed out and woke up in the ambulance on a nebuliser, then spent a week in hospital, where the doctor advised me to do some physical activity, like swimming or running, to grow the capacity of my lungs. He said my asthma was getting worse, so I would probably not make it to my 21st birthday if I didn’t start exercising!”

The very next week a determined Nolene went back to school and through a friend joined the Cross Country team, with her first 4km race coming soon after that. “That first season was a struggle, and I needed medical attention after every race. I would collapse and they would need to put me on a nebuliser. The teachers actually suggested I rethink being a runner, but I was adamant I was going to persevere, because of the doctor’s warning, and because I was scared of suffering the same fate as my uncle, who died of asthma.”

By the end of that season she managed to finish a 4km race for the first time, and says that gave her hope that she was on the right track. “I had just been pitching for races, but now I started training regularly and joined the training group at Pen Tech under Tobias Philander. I trained hard for six months, and while I still got attacks, sometimes induced by exercise, they were not as regular. And when the next school cross country season started, I began finishing in the top three regularly. That’s when people started noticing me, and my coach told me I had real talent. I was also part of the MacSteel Micro Development Programme with the Sport Science Institute, which also helped me greatly with my asthma.”

MAKING HER MARK
By the time Nolene finished school, she was receiving offers of scholarships from colleges in the USA, but she made the hard decision to turn them down and stay in SA, because she wanted to run for her country. She took a gap year to focus on her running, before starting her studies in sports management at UWC in 2005. That year she won her first senior SA title in the 3000m steeplechase, breaking the SA Record in the process, even though still a junior, and that paved the way for her selection for the 2006 Commonwealth Games in Australia.

“I was young and inexperienced, but it went well, and it was a great opportunity to see what it was like on the world stage, so it was great for my running career,” says Nolene, who went on to run in the African Track and Field Champs in 2007, as well as the World Student Games in 2005 and 2009. After completing her studies, with a cum laude pass, Nolene was then recruited by the University of Johannesburg to run for them while doing her Honours degree, which she then followed up with a PGCE in education. While at UJ, she won the SA Cross Country Champs 8km title as well as a second SA 3000m steeplechase title, and represented SA at the World Half Marathon Champs and World Cross Country Champs.

After UJ, she began teaching at Vorentoe High School in 2014, where her then coach, Hans Saestad, was Principal and Head Coach, and she taught and coached there for three years. In those years, she added the SA 10km and 10,000m titles as well as third steeplechase title, and made the SA team for the World Half Marathon, World Cross Country and African Track Champs for the second time each. But even better news was that running in Gauteng really seemed to agree with Nolene. “I was getting less asthma attacks, and I think I finally outgrew it – the last time I had an attack was in 2015, and I no longer even keep a pump for emergencies.”

COMING HOME
In 2016 Nolene returned to the Cape when Elana offered her a job at Endurocad. She says she loves the work, even though it is quite a job to manage 50 athletes, which includes looking after their entries and kit, scheduling camps and travel arrangements, and making sure they are in an academic set-up with skills enhancement, so that they are prepared for life after sport. “Working alongside Elana is a dream come true, because I looked up to her as a junior, and I learn from her every day. She is an awesome boss, because she was an athlete and knows how hard it can be to balance work and training, so she gives me the freedom to do things in my own time, like a gym workout at 10 in the morning.”

She adds that working with young Endurocad athletes has led to her own dream of starting training camps for girls from disadvantaged communities. “I feel there is so much talent in those areas, and I want to show them the benefits of training and sport, and that they too can achieve what I have. We need more girls in the system, and my camps will eventually feed into the Enduroad system, but much as I would like to start this year, I have too much on my plate for now. I’m in the prime of my athletic career, so I want to focus on my own running and chase faster times.”

That’s why Nolene headed to Iten, Kenya in January, taking good friend Caroline Wöstmann along to continue her return from a long injury lay-off. “Training there is so amazing, because there are so many routes, including gravel surfaces that are easier on your legs, and it’s very safe, with lots of friendly faces. I felt like I needed to get away from work to focus on training and prepare properly for this season, and I did 160 to 170km in mileage for three weeks. I feel that I am in great shape now, and I’m really looking forward to the World Half Marathon Champs.”

“We’ll be running on part of the same route as the Valencia Marathon, where I ran my PB in November, so I already know the course, and now that I know from previous experience what to expect at the Champs, I am going into these Champs better prepared. I consider my previous two World Half Champs outings as highlights of my running career, first in Bulgaria in 2012 and then Wales in 2016. I finished 34th in Cardiff, and this year I’m not just going to make up the numbers, my aim is to at least make the top 20.”

COUNTING BLESSINGS
With a packed calendar ahead for 2018, including another big city marathon and an attempt to run a 2:30, Nolene says she never takes her success, or her health, for granted. “My career has paid off to the extent that I was able to buy my first car, and later I was able to build my parents a new house, and I have been lucky to have people who believed in my talent, like my parents and siblings, as well as friends like Vonney Dreyer who are like family, and of course my various clubs and sponsors,” she says.

“You can’t always change your circumstances, but you can change your attitude and how you approach life. If I had given up in those first cross country races, I don’t think I would be here today, and even if I had survived the asthma, I wouldn’t have received a free education, or travelled the world and seen incredible places. I genuinely believe I would not have made it to 21 without running.”