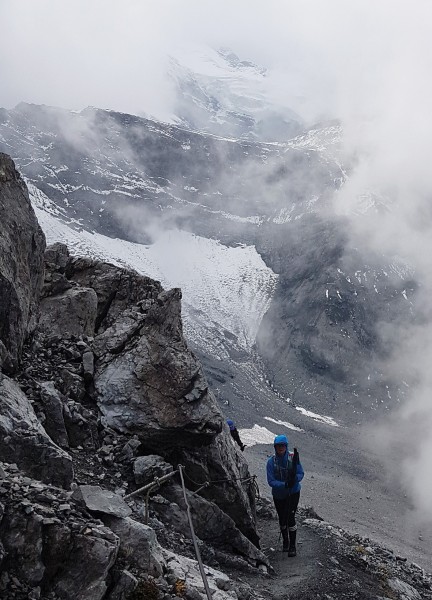 The race slogan for the GORE-TEX Transalpine-Run in Europe sounded stunning: “Three countries, two runners, one week – the dream.” And for two obsessive runners, a seven-day trail run in a team with your spouse, from one Alpine town to the next, sounded as close to a romantic getaway as it gets! – BY BEN SAMWELL

Amanda and I got into the GORE-TEX Transalpine-Run in much the same way as many other races, including the Comrades, 4 Peaks and Hobbit: Totally naïve and ill-informed. I thus had my doubts whether we would be able to complete this 265km race with more than 15,000m of vertical ascent as a team – although we had completed a significant amount of road running events together, we had a less than convincing trail running history as a team.

However, we did train hard, completing many on-road hill repeats of up to 120 metres in the dark of the Gauteng winter, with some more technical training through Kloofendal Nature Reserve, and we also tried and tested new winter gear through the cold months. In June we went for a recce to Switzerland to get a feel for the Alpine trails and in a week completed the 100km Eiger Trail over three days, with Grindelwald as a base, as well as a couple of day trails with Zermatt as a base. Trails to Gornergrat and Hornli Hut on the Matterhorn were true highlights, and we got the first sense of what an Alpine climb of 1 500m over 10km was all about – maybe not as technical as we are used to in South Africa, but much steeper and more relentless than what we could imagine.

We decided to name our team Attitude at Altitude, to remind us to keep going when the going gets tough. Back in South Africa we managed to increase our mileage to 100km per week, which included around 3500m of climbing per week for a four-week period in July, our best effort given our long working hours. Then in August we rounded our training off with the SOX Trail Run in Wilderness and the 35km Magaliesberg Challenge. We were not fast, and knew we were up against the odds to finish, but decided to fall back on our biggest strength, our ability to pace ourselves cautiously and maintain our pace for as long as possible.

Nervous, but Excited
The event started with registration and a pasta party in Fischen, a small town in Germany where the residents entertained us with a traditional street festival including a bierfest and a flag parade for all 40-odd countries represented in the event. Things got a bit more serious during the race briefing, which included a warning that every water table over the next seven days would also be a checkpoint, and in true German style, if you were even one second late in arriving at a checkpoint, you would be disqualified as an official finisher.

We started stage one in a light drizzle, nervous but excited, knowing the first day should be manageable, as we were well rested and the 42km route only had a total ascent of 2200m – just 250m more than the Comrades marathon. The first half was on good paths and we could manage our time well within the time limits, despite some nervous stomach issues. We crossed the border to Austria on a beautiful climb via a narrow ridgeline that left us breathless and in awe, especially when we saw two mountain bikers carrying their bikes down the same path! We finished stage one in Lech, a beautiful town nestled in the Alps, very relieved that the first leg was done and we were still in reasonable shape.

Stage two seemed to be a bit easier, just 24km with a total ascent of 2000m, but it proved one of our toughest days to manage within the time limit. The first climb of more than 1000m started after only a small trot through town, and soon became a tough, technical single path through the forest, with the last couple of kilometres through snow to the top of the mountain. I realised that we were in some trouble, with no experience of snow, and for the first time really having to get to grips with running poles. The views were spectacular, but the pressure high on the difficult terrain. We managed to make the first water table with around five minutes to spare, but made up time on a pleasant snow-covered downhill. After a spectacular traverse, we climbed another tough hill to reach the last water table surrounded by snow-covered peaks, and then a gentle downhill brought us to the end of a longer-than-expected day in St Anton.

Stage three to Landeck (40km with 2000m of climbing) was a muddy affair through misty mountains, with the previous week’s rain making the steep single tracks quite slippery. It was another tough day of climbing and our bodies started to take strain, and knowing that stage four was the longest stage was a taxing thought even as we celebrated the completion of stage three.

The Longest Day
Stage four took us across the border to Samnaun in Switzerland, with 47km of running and nearly 3000m of ascent. I could sense the strain of the previous three days as it took more effort to get out of bed, and sensed the doubt in my wife’s face as we waited for the start. This was really going to be a deciding day, given that we constantly ended close to the back of the field, and the risk of this being our last official stage was high. We decided to approach it the same as all the other stages: Start conservatively, take each section on its merit, and run where possible to reduce our average time.

The day started with a pleasant run along a river for a few kilometres. A 1600m climb followed, initially meandering through a forest and then ending with a monster of a climb up a ski slope to the first water table. Following a well-deserved downhill, another long, steep 1000m climb followed, which took us to an 8km pass at the top of snow-covered mountains with beautiful lakes. Again, our lack of experience on snow was evident, but the scenery was so spectacular that we enjoyed every moment.

The last climb over a snow-covered mountain top with icy winds, wet clothes and short pants made us realise the need for really specialised gear when it really counts. Needless to say, we expanded our frame of reference of cold weather and inadequate clothing, but enjoyed the run downhill to a warmer finish area in the valley, delighted to have completed this brutal stage.

Hanging Tough
Having survived stage four, we did not expect the fifth stage of 37km with 2100m of ascent to Scuol in Italy to be that difficult. We were wrong! The first climb reminded us of Sani pass, while the second was another typical Alpine snow-covered mountain top, and the third was a killer of a climb – like The Wall at Sky Marathon – on a moon landscape that ended with teammates pushing their partners to the top. Following a long and knee-breaking downhill, we finished in the most beautiful Alpine town on a pedestrian bridge over a large river in Scuol. Having survived another day that was longer and tougher than expected, we were finally thinking it may just be possible for us to complete this race, and we were determined to survive the last two days.

We studied stage six of 44km and total ascent of 1700m well, and realised there was a nice gentle downhill over the first 7km that we could make up a lot of time in. The route then turned up an impressive mountain pass that is very popular among mountain biking enthusiasts, carved out of the cliffs with sheer drops into the valley. This was a spectacular run that took us to Prad in Italy, probably our most enjoyable stage, and we celebrated the fact that we were actually going to start the last stage.

We were determined to give everything on the last day to make sure we finished. After all, it was only 31km, with 2700m of climbing. The first technical climb of just over 1300m took us through a misty forest, and

after a pleasant downhill, the second climb started. This was a massive climb of 1400m over 6.5km that climbed through the forest to reach an impressive moon landscape on the higher slopes of Ortler Mountain. We traversed the top of one of the peaks on a short trail, assisted by chains, to reach the final downhill that zig-zagged down the mountain, surrounded by very high cliffs. It was as exhilarating as it was frightening!

The thought of finishing kept us going and we completed the last stage filled with awe and gratitude. Of the 281 teams that started, only 189 finished, and given that we ended in the last 10% of the field on stage one, we were very thankful to have made it! I recall one tough stretch, where a fellow struggling runner told us, “You only have one chance!” This race once again made me realise how spectacular trail running is, and how awesome the people from around the world are that share our passion. So, what lessons can I share after this incredible experience? Don’t let past performance limit your future potential, and never underestimate your spouse!

For more information on the race, go to www.transalpine-run.com/en.