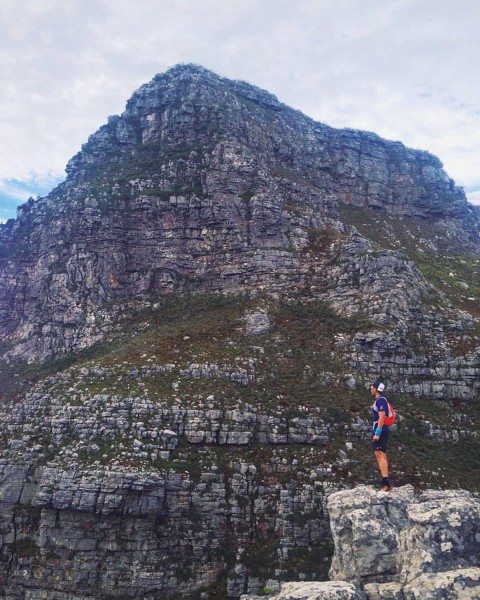 Trail runner and blogger Fareed Behardien use his Leave The Couch blogs and Leave The Couch Together Trail Runs to inspire people to get up and let that bum-print on the couch fill back up, and help them to develop a new love of nature and adventure. – BY PJ MOSES

Fareed Behardien is an adventurous soul who loves playing outside. His blogs about his trail escapades won him the coveted SA Blogger of the Year Award in 2016, and he followed this up by also making a splash in the world of film, when his collaboration with young filmmaker Ziyaad Solomon, to produce the short film Mowbray to Mowbray Ridge, won the Cape Union Mart Adventure Video Contest in the same year.

Things were falling into place, but life often tests us when we least expect it, and so 2017 proved a tough year for Fareed on a personal level. He says he lost some of his mojo as a result, but hitting the trails got him back on track. “The mountain helped put everything into perspective for me. I’ve learned many lessons from running trails and exploring life outside, and that helped me through a very difficult year. I kept telling myself, no matter how tough life seems in the dark moments, I will get through it. This is what all runners learn, especially trail runners, and can use in their daily lives.”

RUNNING DISCOVERED
Fareed wasn’t always the get-up-and-go outside type, admitting to being more of a ‘mathlete’ than athlete at school. He ran cross country for fun and played rugby, but never really had the skill or the desire to push for a first team place. He did enough just to be active and enjoy the vibe around the team. “I then went to UCT and gymmed to stay in shape, but it was more a matter of bicep curls to interest the girls,” he jokes. After varsity he left Cape Town for Johannesburg to focus on his career, and there he started playing rugby again, supplementing his rugby training with some running. This was not easy for a 100kg man, though, and during his first attempt at a 10km race he says he “hit the wall spectacularly” at the 6km mark, but still managed to finish after a long 4km walk!

Coming back to Cape Town was the spark his new active lifestyle needed, and with the help of friends and family he discovered a newfound love of being outside. He left the couch behind for good, braving his first trail race in 2014 at the Mont Rochelle race in Franschhoek. That 8km race proved to be a life-altering event for him. “The mountain doesn’t lie, it shows you the truth of who you are. I thought I was finally fit again, until I did that trail race. It humbled me, but inspired and motivated me at the same time.”

Fareed’s daughter Rahma also helps to keep him grounded and focused on what is good in his life. She loves the mountain as much as her Daddy and often joins him on hikes in Newlands Forest, where she jumps over rocks and goes full tilt downhill. “When I was 10 years old a family friend introduced us to the mountain by organising hikes, and now when I’m running and exploring the mountain trails, I think back with a grateful heart to the memory of Uncle Kevin. We really are the sum of our experiences and of the people we meet. I want Rahma to keep enjoying the trails and live as free as possible. I want that for everybody. My life has improved since I started trail running, and I enjoy seeing people from different walks of life going out there and enjoying similar experiences.”

NEW MOUNTAINS TO CLIMB
Even though Fareed has successfully completed quite a few trail ultras over the last few years, with two Ultra Trail Cape Town and two Bat Run finishes under his belt, this year he has his eyes on a still more goals. “I have decided to finally take on my first road ultra at Two Oceans, even though it is so far out of my comfort zone that I really have no idea what to expect. I have never spent that long on the road before. I think the vibe is something I am most looking forward to, the long tar uphills not so much.”

“I’ve learnt to accept the struggle as part of the journey and that you must embrace the struggle to enjoy the stoke. Trail is not just the great leveler, but also a fantastic teacher, and it shows you that even though it may be tough sometimes, you have it inside of you to get through it. I don’t think you can be arrogant as a trail runner, unless you are a fool. The mountain can be a dangerous place and you need to respect it. As Ryan Sandes says, you never conquer a mountain, it just allows you to stand on it, and this helps me to remember how blessed I am to live this wonderful life.”

You can read Fareed’s blogs at http://leavethecouch.com