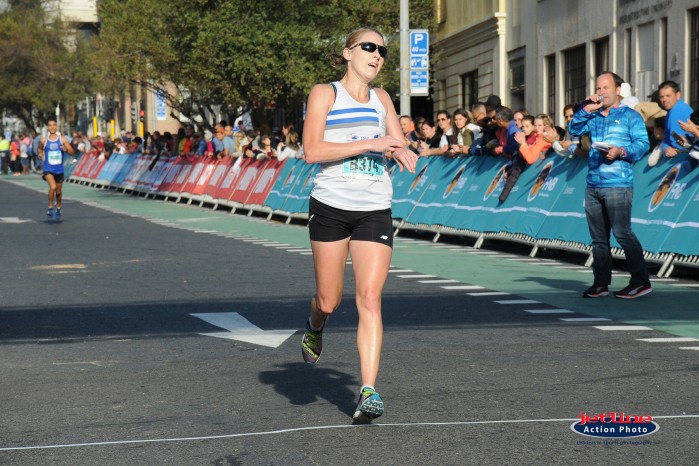 Known for always running races with a big smile, and still often finishing on the podium, Candyce Hall is also a driving force behind the fast-growing Carbineers Running Club of Cape Town, and recently took over running Western Province Cross Country as well… but it all started in Pietermaritzburg. – BY SEAN FALCONER

It’s no real surprise that Candyce (33) took up running. After all, her grandfather Ray Karg ran the Comrades Marathon 15 times, and both her parents not only ran it, but continue to serve as CMA volunteers. “I grew up in Pietermaritzburg, where running the Comrades is just the thing to do,” says Candyce. “My grandfather only ran his first Comrades at 45, in 1968, and he even ran in 1976, after being diagnosed with cancer the previous year. Funny story, that was when my dad jokingly said ‘Old Fart, the next time you run Comrades, I’ll run it with you.’ Well, the next year he had to line up with my grandfather!”

Candyce’s dad John went on to run the race 12 times, while her mom Eileen ran 10 to earn her permanent number, using her father’s same race number 388. Candyce continued that family tradition by taking over her father’s number 2247 and she now has 14 medals to her name. John, meanwhile, turned his focus to race organising, and today the Maritzburg City Marathon and Capitol Classic are his “babies,” as Candyce puts it, and her parents help organise a host of other events as well.

SIMPLE BEGINNINGS
Given her family’s running history, Candyce ran her first 10km race aged eight, but says she was very slow. “Later, I ran my first half marathon at 16, and finished stone last in 2:32, with the ambulance driving just behind me!” She only started running seriously while studying BA Human Kinetics and Ergonomics in Grahamanstown, but she says she came to love running far more than her academics. “Admittedly, I was not a great student… I would run in the early mornings, fall asleep in lectures, and then run in the afternoons again. It turns out you can absorb quite a lot when asleep, because somehow I still passed.”

She says her running was very simple back then. “I had one pair of shoes per year that my parents bought for me, and I used Sole-Saver to rebuild them regularly, so that they would last. We didn’t have physios or foam rollers for injuries, no Facebook for advice or info, and no GPS watches or cell phones. I just had an old analogue watch my grandfather gave me, and I would use the hands on the watch to work out the time of my runs, then use a ruler and a map that I bought for 50 cents at the Grahamstown City Hall to work out my running routes and distance. But I still won the 2005 KZN Marathon Champs back home in Maritzburg, with those worn out shoes and that old watch!”

From Grahamstown Candyce moved to Cape Town to do an Honours in Exercise Science and Biokinetics at UCT, driven in part by her chequered history of running injuries. “When I started running in 2003 I picked up a knee injury and no-one knew what to do about it, so I ended up studying that. Today I can fix that kind of problem in one treatment session!” In fact, her reputation for being good with injuries has seen Candyce establish a thriving biokinetics and personal training business, based in Hout Bay.

FAMILY VIBE
In 2008 she married Martin Bongers, who has turned into quite a runner thanks to the relationship. “He actually started running so I would go out with him, and for our first race together, he gave me a lift to the Transnet 10km in Bellville. I told him not to try chase me, as I was going to race, but he still tried. I finished in 42 minutes, he finished about 10 minutes later, and he said he now understood. He ran the Comrades in 2009 and had a shocker, then ran again in 2013, because he thought it was going to be my last one, and said never again. But I found out recently that he secretly entered for 2018, because a friend from Australia is running, so he’s in training again.”

These days, Candyce still regularly podiums in races, but she says she actually rarely races hard any more. “I did about 1500 to 1600km in races last year, but of that, the only one that was actually racing hard was the Cape Town Marathon – and even there I actually only raced to 30km, because there were no toilets along the N1 stretch for a much-needed ‘Candyce Stop.’ My body decrees how well I will run on the day, and nowadays I prefer to just run with friends and for the club vibe. That’s why running my last four Comrades slowly and socially are amongst my running highlights. I got to spend time with running friends, while running the whole day!”

This is where the vibrant Carbineers Western Province club comes into the picture. Candyce and her clubmates are often seen running together, even stopping mid-race for a one-footed Carbs pose pic. That entails everybody standing on one leg, with the other leg slightly lifted and knee bent at 90 degrees. “It’s just incredible that we can still balance on one leg after a big climb,” jokes Candyce. “It originally started with the Red Sock Community, and we just carried on doing it at Carbs. It’s become our thing, and all part of the incredible family vibe of our club, where everybody knows if a Carb at the back ran a PB, and that’s as valuable as the guy up front winning a race. That’s how it should be.”

FOR CLUB AND PROVINCE
There is also an interesting story behind the Carbs WP club, given that it shares a name with the Natal Carbineers club of Pietermaritzburg. Candyce explains that in 2013 the guys doing the Unogwaja ride from Cape Town to Pietermaritzburg wanted to then run the Comrades in Carbs colours, because the original Unogwaja, Phil Masterton-Smith, had run in Carbs colours in 1931 when he won the race, before moving to the Cape and cycling to the race in 1933.

“You’d think it would be possible, as the Unogwajas were going to be running for 12 hours and doing it for a good cause, but Comrades and the provincial bodies said the domicile rule meant they had to run in the colours of a Western Province club, so my Dad said, fine, let’s create a Carbs club in Western Province! We only had 13 members at the end of that first year, but year on year we’ve been the fastest-growing club in the province, relatively speaking, and at the end of 2017 we were 220-strong, and could soon reach 350 judging by the enquiries I have received this year!”

Meanwhile, Candyce was recently voted in as new Chair of the Western Province Cross Country Committee, and has been tasked with rejuvenating the discipline. “The people running it did a solid job, but I think it can be transformed into something even bigger and better. For starters, we’ve moved a lot of the league meets to Sunday afternoons, as Saturdays clashed with both road races and school sports. There was some push-back, but we argued that Sunday is a family day, so why not bring the whole family to cross country, as we’ll even have a food truck there. I realise you don’t change these things overnight, but it’s about being proactive to change things for the better, and I’m very excited to see what we can achieve.”