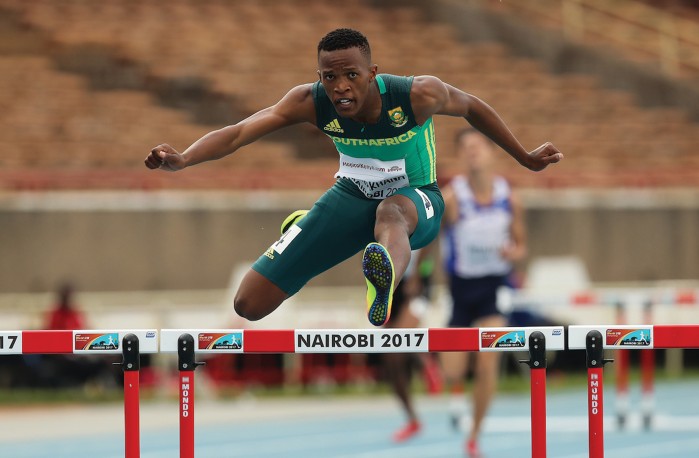 The 2018 Track and Field Season is going to be a busy one for South African athletes, and one in which there is plenty of opportunity for both established athletes to further their reputations and for those who have not yet quite hit “the big time” to do so. – BY MANFRED SEIDLER

Traditionally, the track and field season culminates with a global event in the second half of the year, be it an Olympics or a World Championships, but the 2018 season will be very different due to the fact that the 2018 Commonwealth Games will be taking place on the Gold Coast in Australia this year, and as with South Africa, the summer sports take place in the first four months of the year. The athletics component of the Games take place from 8 to 15 April, and Team South Africa will once again be looking to track and field to pick up the bulk of its medals.

That said, even with the stars that Team South Africa has at its disposal now, it will be a challenge to equal the 14 medals from 2006 or nine from 2014. Still, medals are expected to come from the likes of Akani Simbine and Anaso Jobodwane (sprints), Luvo Manyonga and Ruswahl Samaai (long jump), Caster Semenya (800m – it is not yet clear if she will be competing in the 1500m as well), and Sunette Viljoen in the javelin. Those are considered “banked medals” by many, and one would hope that a men’s 4x100m relay team will be included in the squad, as many believe this is another virtually guaranteed medal. Another athlete with high expectations will be the evergreen LJ van Zyl, who will be chasing yet another accolade in the 400m hurdles in what is probably his final Commonwealth Games.

ON THE INTERNATIONAL STAGE
The first big event for SA athletics in 2018 will be the World Indoor Championships in Birmingham from 2-4 March. This could be quite a successful outing for Team South Africa, with the provisional team listing such superstars as Luvo (he has to be the favourite to win) and Ruswahl (5th at the 2016 World Indoors), as well as Dominique Scott-Efurd (1500m/3000m), Carina Horn (60m), Henricho Bruintjies, Emile Erasmus (both 60m sprints), Zarck Visser (long jump) and Orazio Cremona (shot put).

Should these athletes make the final team, they could potentially have a very busy March. The 1st sees the first of three Athletix Grand Prix Meets in Roodeport, with the second meet in Pretoria at Tuks (8 March) with the final on 22 March in Paarl at the renovated Dal Josefat Stadium, and nestled in between the second and third GP Meets are the Senior National Championships from 15-17 March at Pilditch Stadium in Pretoria. March will therefore be a particularly big month for those athletes going to the Commonwealth Games in April, to sharpen up and be in top shape for Australia, but you probably won’t see our best athletes competing at all of these events, as that would simply be an overload.

Still, you can expect some brilliant performances at the National Champs, where South Africa’s best will want to put on a good show in front of their home crowd, as they did in 2017. For starters, Folavio Sehole and Jerry Motsau are calling each other out on social media as they both chase the 1500m crown. Both have incorporated the date of the 1500m final in their Twitter handles – that’s how important this title is to them! Meanwhile, the likes of Akani, Anaso and Henricho will be lighting up the track in the sprints and sub-10-second times should be expected again in the 100m, and possibly sub-20 in the 200m. Sadly, there will be some athletes missing. Wayde van Niekerk will still be undergoing rehabilitation after knee surgery, while Thando Roto, who clocked 9.95 in 2017 to become the second-fastest South African of all time, is at the time of writing nursing an injury, as is junior sprint sensation Tlotliso Gift Leotlela.

THE NEXT GENERATION
While the focus will naturally be on the seniors this year, especially around the Commonwealth Games, keep in mind that South Africa finished top of the medal table at the World Under-18 (Youth) Championships in 2017, and it’s certainly an exciting time for the younger generation. Inspired by the seniors, we saw some scintillating performances last year, with the standouts being hurdler Zazini ‘Soks’ Sokwakhana and high jumper Breyton Poole. Soks clocked 48.84 seconds for a World Under-18 Record in the 400m hurdles, and then went on to win the World Under-18 Championships title in Nairobi, while Breyton also won gold with a 2.24m. In November he cleared 2.25m to top the under-18 world rankings for the year, a height that already placed him joint fifth in the under-20 world rankings of 2017.

Our youngsters will be competing at schools’ events as well, to hone the skills and chase their selection first for the SA U18 and U20 Championships, in the Boland from 5-7 April, and then the World Under-20 Championships in Finland from 10-15 July. Athletics South Africa has been setting high qualification standards and criteria for international selection on the basis that they want the country to be placed close to the top of the medal table at global competitions, and while the merits of this policy have been hotly debated, one cannot deny that the under-18s were top of the medal table in Nairobi in 2017 at the World Youth Championships. Therefore, the standards to be included in the team to the World Under-20 Championships will likely not be easy to meet either.

Another fantastic opportunity for the youngsters is the expanded Puma School of Speed Series that take place throughout the country from January to March. While the focus is squarely on the sprints – hence the name School of Speed – there are also opportunities in events on the track up to 1500m, and as of 2018 in the long and high jumps as well.

LONG SEASON AHEAD
After the Commonwealth Games, there will be time for the seniors to take a short break before getting ready for the second half of the year, including the Diamond Leagues and the Africa Championships. Akani, Luvo, Ruswahl and Caster are expected to continue to set the bar throughout 2018, and Wayde will hopefully be back in action in the second half of the year at a few Diamond League events. Anaso and Henricho are also due for another big year – both are former national record holders, but have not been at their best in the last two seasons, for various reasons. Cornel Fredericks has also been dogged by bad luck in the last two seasons, and we can expect something big from him as well this year.

With all of that said, a cautionary note nevertheless needs to be thrown in. While there is a buzz around the sport of athletics in South Africa at present, the country still struggles to unearth and develop female athletes of world class standard. Evidence of that is the fact that only two women are in the squad for the World Indoors, and just five in the squad (at the time of writing) for the Commonwealth Games. Another area of ongoing concern is that we seem to have pockets of excellence, in particular in the men’s sprints and jumps, but do not seem to have the same depth across the sport that the talent of this country says we should have. Hopefully the results of the current crop of seniors as well as the youngsters coming through the ranks will continue to inspire, and will spark a resurgence of the sport in all areas of the country.