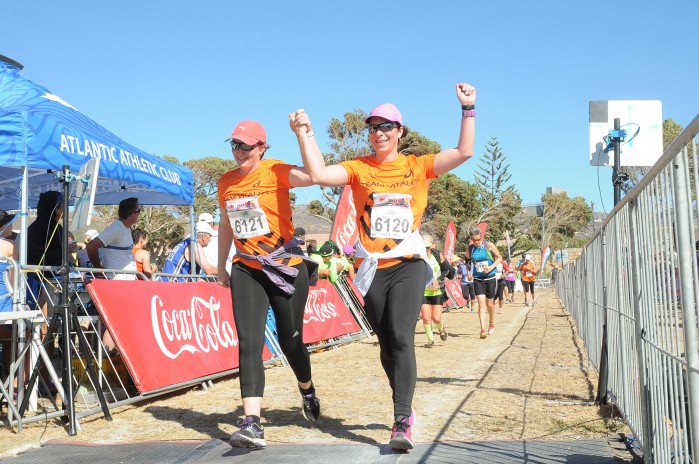 From deciding to get back into shape, a journey of four years has seen friends Zoe Riley and Audrey Hattingh discover the joys of running, make new friends, get to see new places and challenge themselves, and along the way they have inspired many others to start running as well. – BY MANFRED SEIDLER

Running has a way of getting into the heart and soul, because not only is it healthy and good for you, but it’s also great fun. That’s what Zoe Riley and Audrey Hattingh, two long-time friends from Johannesburg, have found since they took up running in 2014, but while their own personal bests and race finishes have given them great satisfaction, their biggest achievement is undoubtedly having inspired many others to take up running as well. Zoe’s husband Rob and Audrey’s husband Gareth are now running, and their friend Jacqui Carr and her husband James are running, plus the various kids, and other friends and family, and work colleagues…

Not only that, but it also ties in with Zoe’s work. She is a financial broker specialising in medical aid schemes, and part of her portfolio is to encourage people to sign up for packages that reward them for being healthy. Having worked with Discovery for many years, she says the Vitality packages just made sense to her, to the extent that she wanted to buy into it herself. “I always felt that if I am going to sell the product, I need to be able to believe in it, so I decided to try out the Vitality programme myself. That led to the two of us starting to exercise together, then do our first parkrun, and eventually to start running races.”

ON THE RUN
It all started eight months after the birth of Zoe’s second child, when she felt she needed to get back into shape and started going to the gym, with Audrey agreeing to join her. “We just felt that it was time to do something again. Work, family, kids had all been the priorities, but once things had settled a bit, we felt it was time to do something for ourselves, so we headed off to gym. It was great because not only were we training, but we were also able to share quality time with each other.” However, soon gym workouts were no longer enough…

Parkruns have taken South Africa by storm since being introduced in November 2011. They offer a safe, free and fun way for the whole family to exercise and socialise, and today there are more than 120 parkruns taking place every weekend all over South Africa, with the total number of registered participants numbering nearly 450,000. Being based in the Bedfordview area of Johannesburg, the closest parkrun for the girls back then was at Modderfontein, about 15km up the highway, and that’s where the girls headed to start their New Year’s running resolution.

“Our first parkrun was on the fourth of January in 2014, and it was so much fun,” says Audrey. “We loved every minute of it,” echoes Zoe. “Our families came out, we had coffee afterwards, it was just a really pleasant way to spend the morning, and we got in our training!” That day proved a life-changing experience, and for the next year, every Saturday without fail, Zoe and Audrey would be on the Modderfontein start line. Later, however, merely showing up every weekend at the parkrun was not enough… They wanted to become more involved, so they put their names down to become part of the volunteer programme.

“After 20 runs, Event Director Wayde Morsink encourages participants to help out and marshal on run day, so we contacted him and put our names down, but then heard nothing for a long time,” says Zoe. “Then one Friday evening, at around 10pm, I received an SMS asking if we could help the following day. It just so happened that Audrey was with me at the time and we immediately agreed. The following day we helped with the marshalling, but afterwards I went to Wayde and had a chat with him. I told him that sending SMS’s out at 10pm the night before clearly meant that he needed some administrative help, so I ended up becoming the volunteer coordinator for the next two years. During that time we hit the biggest field ever assembled at a South African parkrun, with over 1800 people participating!”

STEPPING UP
As with all training, the girls eventually hit a plateau in their running, but help was at hand. The Modderfontein parkrun is close to the Bedfordview Running Club, and many club members regularly take part in the parkruns. With time spent together at the parkrun, it was natural that friendships were formed. “They were so helpful and had good advice on how to improve our running, so we ended up training more. Instead of only doing twice a week gym sessions and the weekly parkrun, we now did more runs in the week, too,” says Zoe.

“We started going to the Bedfordview Time Trial and ran the 4km loop every week. This led to our first 10km race, the Sarens 10km in March 2015,” says Audrey. “But we really wanted to do a half marathon,” adds Zoe, “and we wanted it to be a different kind of half, so we decided on Knynsa in July of 2015. We loved the fresh air, the run through the forest, the whole atmosphere, and we finished in 2:41. That’s when we decided to look for half marathons that were different to the ones that lie on our doorstep, especially after doing the Dis-Chem Half in January 2016. Dis-Chem was great fun, but it was literally on our doorstep, and we wanted something different out of our races, so we decided to do the Peninsula Half Marathon in Cape Town that March.”

The Peninsula Half includes the scenic coast road from Muizenburg to the finish at the Naval Grounds in Simonstown, but if the south-easterly wind is blowing, it can be a tough run into a strong headwind. “Running along that beachfront was simply amazing, but the wind was something to behold!” recalls Zoe. “That was tough, really tough, but we still enjoyed it. We were hoping to break our PB’s there, as the route is almost flat, but with that wind, it was not to be.”

GOOD TIMES
In sticking with their philosophy of running out of town half marathons, Zoe and Audrey gave the 2017 Kaapsehoop Half Marathon a go this past November, and there they did succeed in smashing those PBs, taking 12 minutes off their previous best. “The last 4km were tough and we had to ‘talk nicely’ to ourselves to get there,” says Audrey. “When we set out on this journey, all we wanted to do was break 2:30 for the half marathon, so when we ran in at 2:24, we were ecstatic! We have no ambitions to run anything beyond 21 kays, but would dearly love to run an international race, and Berlin looks to be the one we will look at first. And hopefully we will keep inspiring others to join us for a run.”