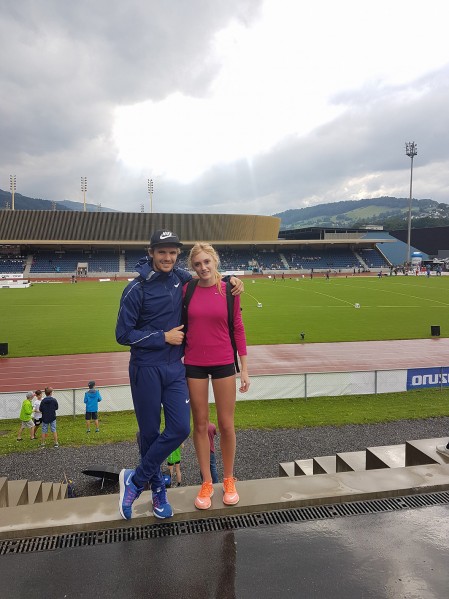 Finishing 13th at the 2016 Rio Olympic Games and only missing the final by one position established Rynardt van Rensburg as one of the world’s top 800m runners, so missing out on selection for SA’s 2017 World Champs team was a massive disappointment, but the man from the Free State is ready to try again. – BY REGGIE HUFKIE

The 2017 IAAF World Championships in London marked Team South Africa’s most successful champs, with six medals, but the lead-up to the meet left a bitter taste as many athletes had to deal with a controversial ASA selection policy that saw a number of athletes who had qualified according to IAAF standards left at home. One of those left out of the team was University of Free State student Rynardt van Rensburg, who had won the SA Champs title for the first time earlier this year and run a season’s best of 1:45.73, thus meeting the IAAF standard of 1:45.90, but not good enough to meet the ASA standard of 1:44.84.

“At the 2016 Olympic Games I finished 13th in the world, and my goal was to make the final at the 2017 London World Champs. My drive, my motivation, my planning, training and everything was towards London. Not being able to compete at the World Champs broke my heart. I ran 1:45.73, which was faster than my time heading into Rio!” says Rynardt. “The fact is that I train to peak at championship events, as I did in 2016. It’s a pity, but I have to accept it and move forward.”

Time for Plan B
In spite of the disappointment over London, Rynardt decided to focus on the Summer Universiade (World Student Games) in Taipei, also in August, but then another blow followed… “I picked up a hamstring tendon injury just three weeks before the World Student Games, and it was worse than what we initially thought.” He was advised to sit out the Games, but after the disappointment of London, he says he simply couldn’t turn down the opportunity to represent his country.

“I believe in chances, giving people a shot. We athletes work extremely hard in order to be amongst the best in the world, and we do not get paid well at all, and the day you take away the opportunities to compete, is the day you will see a lot of talent giving up. I am not ready to give up.” That spirit saw him go to Taipei, do enough to finish third in a tactical first round heat, clocking 1:55.00 and automatically qualifying for the semi-final round, where he won his heat in 1:48.97. However, his legs simply didn’t have enough power in the final, due to the injury, and he finished a disappointed eighth in 1:49.70.

“Things did not turn out the way I planned or the way I wanted them to, but I’m thankful for every opportunity and I will surely rise again. It was my first year as the South African Champion and I still managed a 1:45.73, which shows we did things right. It was also my third year ending as the fastest 800m athlete in South Africa, and I’m grateful for all the small victories, in spite of the big disappointments this season. 2018 will be another year, with new opportunities.”

Back to the Drawing Board
Currently on a strict rehabilitation programme, Rynardt believes he will bounce back in time for the start of the 2018 season. “Due to the injury, my training will only start at the end of November, but if I can get in shape early, I will attempt two or three indoor races in February in order to attempt to qualify for the World Indoor Champs. However, my main goal is to defend my SA title, and then I would like to have a chance at the Commonwealth Games. Once again my hopes will be on ASA and SASCOC to select me after December into the preliminary team for the Games.”

Meanwhile, the Kovsies student has decided to put his B.Sc. Psychology degree on hold and focus on his secondary studies. “I’ve been doing two or three modules of Marketing as well, and in order to focus as much as I can on my Athletics, I will first finish Marketing in 2018 and then I hope to finish my other degree after that.” In between that, he will still make time for other interests. “I do part-time work as a photographer for Spektor in Bloemfontein. I have a massive passion for photography and I love capturing sport photos, plus I also write training programmes and coach.”

Coaching youngsters also ties in with Rynardt’s passion for the sport: “I believe athletics can become as popular as rugby and football if we can get some powerful people to join the sport. And selecting as many athletes as possible to be seen competing on TV on the big stages like the World Champs and Olympics will also help grow the popularity of the sport.”