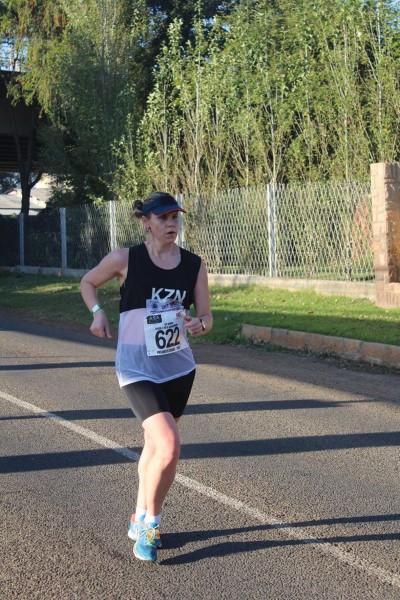 Having taken an eight-year sabbatical from race walking, Natalie Le Roux returned to competition in 2015 and her remarkable comeback continued in October with a new SA Record for 50km in her debut at the distance. Now she has her sights set on the world stage. – BY MANFRED SEIDLER

As early as 600 BC, legendary Chinese philosopher Lao Tzu said, “A journey of a thousand miles begins with a single step.” He could have been talking about race walker Natalie Le Roux, who on 21 October was crowned the SA 50km Road Race Walking Women’s Champion. Attempting the distance for the first time, the KZN athlete finished in 4:54:33, not only becoming the first female walker in South Africa to break five hours, but also taking a whopping 20-plus minutes off the previous SA Record of 5:17:55, set by Sandra Steenkamp in Cape Town in October 2011. Not bad for somebody that had taken an eight-year break from competitive walking!

TALENT DISCOVERED
Natalie’s ‘first step’ was back in 2000, when she was in Matric. “I went with a friend to Bellville Athletics Club to become a registered runner, as we wanted to start taking part in road races. Then in my first race I saw somebody race walking and was immediately attracted to the sport.” She quickly showed a real talent for walking and set Western Province records in the 3000m and 5000m for Girls Under-20 in 2001, followed by a WP Senior record in the 3000m in 2003. However, as so often happens, ‘real life’ then forced Natalie to put walking on the back-burner.

“I studied Food Technology at the University of Stellenbosch and started working in 2005 at what was then Rainbow Chickens in Worcester, now RCL Foods. I also met my husband and had my son, so it was simply impossible to do any form of training. I did try briefly in 2007 and finished fourth at the SA Championships in the 20km event, but it was simply not sustainable,” says Natalie, who was married in 2008 and had her son De Wett in 2012.

Another comeback almost happened a few years later, when a former walking rival and friend, Rouzanne Harris, was teaching in Worcester and coaching the youngsters. When she left to start a new job, she asked Natalie to take over as coach, and by training with the kids, the walking bug started to bite again… but in 2014 Natalie’s husband was transferred to Durban, and the combination of the move, work and being a full-time mom once again put paid to any thoughts of competing.

However, in 2015 Natalie decided it was time to race again, and an SMS message to SA and Africa 50km Record Holder Marc Mundell saw her introduced to his father, Ollie, himself a former top walker, who began coaching her. Just a few short months later she competed at the South African Championships in Cape Town and not only won the 30km race, but also set a new South African record of 2:46:48!

DOORS OPENING
In April 2016, the IAAF announced that women would, for the first time, be able to compete in the 50km Race Walk at the 2017 World Championships in London, but with the qualification window closing too soon, and Natalie not yet ready for a shot at the distance, she and Ollie set their eyes on the 2017 SA Championships in George. In the months leading up to her 50km debut, she showed that she was in form by setting two new PBs, walking 1:43:49 for 20km at the SA Masters Champs, followed by a 25:02.99 for 5000m in Birmingham in the UK. Then it was time for the 50km.

“I wanted to give it a go and see how it felt, and the plan was to try and go under five hours,” says Natalie. “It was a long distance and it was my first race, so I’m really proud of myself. This was the hardest thing I have done, but I’m excited to try it again, and now the plan is to go closer to four-and-a-half hours. I am currently ranked 22nd in the world and I would really like to see how high in the world rankings I could go.”

These days, Natalie is fortunate to have an incredible support system that makes competing possible, thanks to her parents staying on the same property, which means she has someone on hand to look after her son when she is training. “I am really blessed to be in this position. With this support base, I am now targeting an international race for 2018, ideally in the middle of the year, and I am also keen to give the 20km another go. My biggest regret is that in 2004 I was invited onto the Olympic squad, but due to work commitments I was not able to see what I could achieve, so this is another lease on my walking career and I want to see just what can be done.”