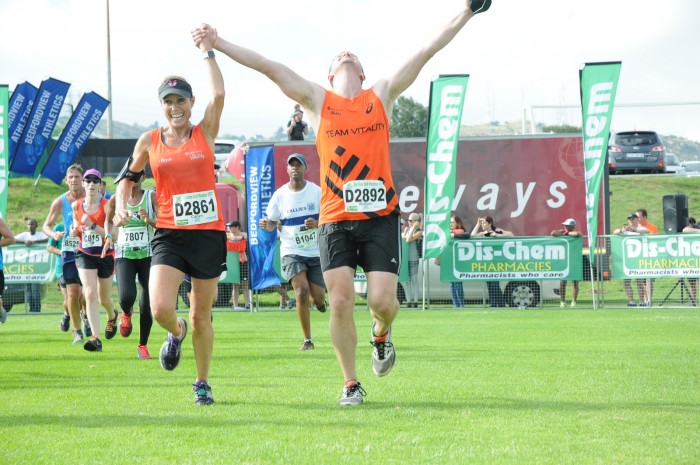 Just over a year ago, 40-year-old Johannesburg-based software developer Will Addison found himself in front of the mirror, and he didn’t like what he saw. That prompted him to take up running, and in just over a year he has lost 24 kilograms, run his first Comrades, and found a new lease on life. – BY SEAN FALCONER

The date 15 September sticks in Will’s memory. That was the day he saw the reflection of his round figure, then weighed himself and found he was 96kg, heavier than he had ever been. A father of two, Grace (18) and Dylan (15), Will attributes his weight-gain to a combination of factors. “I played a lot of soccer when I was younger and had done spinning at the gym to keep fit, but after coming out of a really bad divorce a few years ago, I got into terrible eating habits. I think life just got on top of me, with one thing after another, especially when Dylan left to go live with his mother in the UK.”

“When I looked in the mirror that day, I saw a man that had let himself go and realised I had to do something with my life, so I took a ‘before picture’ in the mirror and that same day I hit the gym for the first time in a very long time. I ran 2km on the treadmill that day and nearly passed out, but I persevered, and gradually upped my mileage till I was running 5km. In the meantime I cleaned up my diet – no more alcohol, and no more fast food. It was hard, but running made life better, and I came to love my daily run.”

Setting Goals
With his newfound love for running and having grown up watching the Comrades Marathon on TV, Will decided to make the big ultra his goal, but his fiancée Caryn Wilson, an experienced runner with two Comrades medals, told him he wouldn’t be able to run it just on treadmill training, and that he would need to hit the long road and increase his mileage substantially. “So about six weeks after starting running, I found a night run on a golf course and did my first ever 10km. I actually managed OK, so decided to go further. Then Caryn told me about the RAC Tough One 32km in November. I have never felt more sick and more pain in my life! I finished, but I had to lie down at the end, and I lay there wondering how people actually go further than this, let alone do the Comrades.”

Undaunted, Will continued training and went on to run his first marathon in January, at the Johnson Crane event, where he also qualified for Comrades. He followed that up with the Pick n Pay Marathon, Cape Gate Vaal Marathon, Old Mutual Om Die Dam 50km, and the RAC Long One 60km training run, and by then he had lost 22 kilograms in seven months. “I was really enjoying myself, and life just kept getting better!”

Mission Possible
And so June arrived and Will lined up for his first Comrades. “Honestly, it was the most daunting thing I had ever done, but I had my mentor Caryn running alongside me the whole way, just as she had been throughout my running journey. My aim was just to finish under 12 hours, but at 60km my body started shutting down, and from 70km it became really difficult. On Polly Shortts I saw runners collapsing and throwing up, and at the back of my mind I said I must just keep going. I felt that if I stopped, my legs would seize up and I would be done, so I just kept moving. We finished in 10:40, and I have to admit, I was in total disbelief that I had come so far in eight months. OK, I was completely dead afterwards, but I was so proud, because I had proven a lot of people who had doubted me wrong.”

With a hugely successful first year of running under his belt, Will is looking forward to 2018. “I’m entered again for the Comrades, and I also want to try other races, to see the scenery. I’m mixing running with strength training, because I want to chase my times – not so long ago running 55 minutes for 10km seemed an insurmountable challenge, but now I’m doing 53 minutes and feeling OK. I’m also quite happy with my current weight… I am now 72, so I have lost 24 kilograms in a year! You know, when this journey started, the first few weeks of training were incredibly difficult, but I never gave up, and I hope my story will motivate other people that anything is possible.”