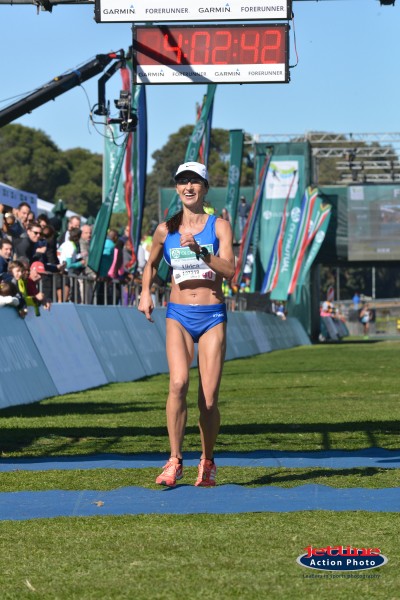 If there is one runner likely to agree with the old saying that “life begins at 40,” it is Ulrica Stander, especially given the amazingly successful year the 43-year-old Capetonian has enjoyed on the road after moving up to the marathon distance and beyond. – BY SEAN FALCONER

After seeing her running take a major dip in 2015 due to long working hours on top of raising two kids, 2016 saw Ulrica return to the type of form that had given her personal bests of 35:25 for 10km and 1:17:34 in the half marathon. She won the Peninsula Half Marathon and claimed the series title in the veteran category of the Spar Women’s Grand Prix, and along the way she was recruited by the KPMG Running Club, and signed up with a new coach in Lindsey Parry. That saw her decide to make her marathon and ultra debut in 2017, and the podium positions have come thick and fast since.

It started with a third position in the NutriBullet Bay to Bay 30km in January, where she was also first veteran over the line in 2:02:35 as she went beyond 21km for the first time. After running the Red Hill 36km as a training run, she then won the Peninsula Marathon in February, posting 2:58:45 on debut to take both the overall and veteran titles. Two months later she stepped things up at the Old Mutual Two Oceans 56km, clocking 4:02:45 and claiming an incredible sixth place (and second veteran) in her ultra debut.

“I was actually very grateful for my performance at Two Oceans, because my training was a bit up and down, and I felt I hadn’t been able to focus properly. I went out with the four-hour bus, then at 23km pushed on a bit with my clubmate Renier Grobler and a guy from Boksburg, but I went through the marathon mark feeling a bit tired. They say Oceans only really starts there at the bottom of Constantia Nek, so I had to dig deep to stay positive when the sub-four bus went past me. What kept me going was the incredible energy of the crowds lining the route, and I remember smiling all the way down the home straight as I came in. It really was a privilege to run such a wonderful race.”

Then in September Ulrica lined up for her second standard marathon at the Sanlam Cape Town Marathon, and in spite of severe stomach issues, improved her PB to 2:54:09 as she finished 14th and once again claimed top spot in the veteran category, added the Western Province Champs title for good measure, and posted the fastest marathon time by an SA veteran woman in 2017. “I was aiming for 2:50, but I think the gel I took at 25km reacted with my stomach and I struggled for the rest of the race. I was still ecstatic with my time and position, but I know I can go faster.”

Natural High-Flyer
Ulrica was born in Pretoria, the youngest of three kids in a close family, and showed a passion for health and fitness from an early age. She started running competitively in high school, focusing on middle distances on the track as well as doing cross country, and soon earned provincial colours in both disciplines. She then attended university in Stellenbosch, choosing to go there because her brother was already studying there, and did a B.Sc. with Human Movement Science, majoring in physiology. While at Maties, she took up triathlon and soon made a name for herself, making the SA training squad for the 1996 Olympics, but unfortunately missed out on the final team selection. She did still represent SA, at the Triathlon World Champs in the USA, and still lists triathlon as one of her favourite sports.

After varsity, Ulrica began working in the pharmaceutical industry, first as a rep and later in a marketing role, doing so well over the years that her current position as Product Specialist in Marketing for Pathcare’s Histology and Cytology departments was specially created for her. Along the way she got married and had two kids, Liam (now 13) and Mila (10), and Ulrica is obviously proud of her two achievers, who both recently won their inter-house cross-triathlon events at school.

“Liam has Western Province colours in rugby and biathlon, captains the swimming and athletics teams, and is head boy at Kenridge, while Mila won the Vicrix Ludorum at the school athletics meet after winning the long jump, both sprints and the 1200m, and she also has provincial colours in biathlon and biathle. We actually all went to the SA Biathlon Champs together and it was lekker to compete alongside my kiddies. Mila finished fourth in the biathle and was chosen to go to Spain for the World Champs, but we decided she was still a bit too young for such a trip. So, we’ve told her she can go in two years’ time.”

Following Her Dreams
On top of family, work and running commitments, Ulrica still finds the time and energy to do even more, including co-chairing her own charity, the Radiance Foundation! A few years back, her long-time friend Madeleine Pretorius entered her in the Mrs South Africa competition and Ulrica made the initial group selection. Part of the criteria for final selection was charity work, but with her marriage of 12 years coming to an end, she decided to withdraw. “The organiser offered me more time, and invited me to enter again the following year, but I felt I had to turn her down. Still, that led to a new dream of a charity to help people, and when Maddie’s friend, ophthalmologist Dr Junet van der Merwe, told us there is a huge need for cataract operations, we decided to do something about it. We started fund-raising two years ago and we’ve already funded 180 operations here in the Western Cape.

Another thing Ulrica would like to pursue more of is TV presenting. In 2012 and 2013 she was sponsored by USN and became one of their health and fitness ambassadors, which led to her appearing on the Espresso Show. “I want to inspire everyone to be the best they can possibly be, and to do it on such a platform, alongside those brilliant presenters, was amazing. The most fun was doing ‘home invasions’ and going through people’s cupboards to suggest healthier nutritional options, and it was so obvious when some people were hiding the bad stuff!”

Getting back to running, she says her list of upcoming races includes the BlueBoost Winelands Half Marathon this November, followed by the same Bay to Bay, Red Hill, Peninsula and Two Oceans programme as in 2017, and after that, perhaps Comrades, too. “Lindsey said at the beginning of this year, perhaps I can run Comrades in 2018 as a training run, then race it 2019, but my focus is on Oceans and I’m hoping for a podium finish. Because of my age, the longer the distance, the more I feel I can compete with the elites, and work-wise and family-wise, I’m now set-up to be able to focus on my running, so my goal is to give it 100% and see where it takes me.”