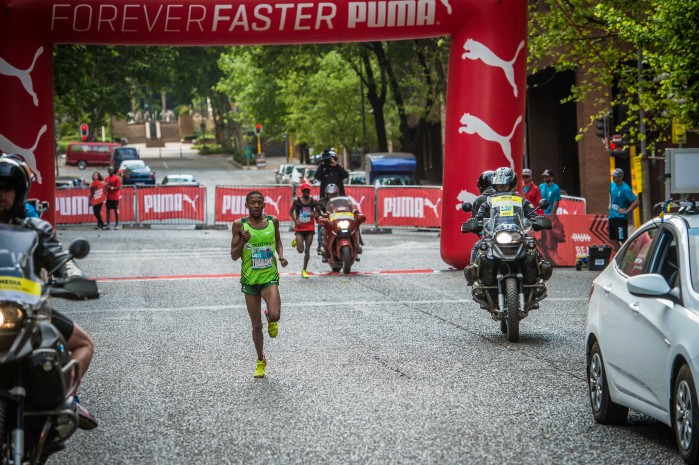 Although he is still just 22 years old, Thabang Mosiako is quickly making a name for himself by taking on and beating the ‘big guns’ on the South African distance running scene, and he has some notable wins under his belt from the 2017 season, including an SA title. – BY REGGIE HUFKIE

This has been quite some year for North West Province-based Thabang. It started in January at the always hotly contested Dis-Chem Half Marathon in Johannesburg, where he cruised to a 1:05:53 victory, beating off the fierce competition of Desmond Mokgobu and Lucky Mohale to claim top spot on the podium. Then in April he lined up in the men’s 5000m final at the SA Senior Track and Field Championships in Potchefstroom, in a field containing two SA record holders, Elroy Gelant (5000m) and Stephen Mokoka (10,000m), and once again claimed line honours.

Unsurprisingly, that 5000m final enjoyed a blisteringly fast start, with Elroy leading the pack through 3000m in 8 minutes 15 seconds. Meanwhile, Thabang had worked his way through the field and found himself in third position as the bell sounded for the last lap, but the gap to Stephen and Elroy now seemed too big. However, summoning up every last ounce of speed, he somehow reeled in first Stephen, and had the spectators on their feet as he caught and passed Elroy with 30 metres to go to be crowned SA 5000m Champion.

Glory in Jozi
Thabang then added a third big title in September when he outran the SA 10km Record Holder Stephen to win the FNB Joburg 10K CityRun, and says it meant a lot to beat his role model: “Stephen is the man who makes me go train every time, because I want be strong like him.” In the race, David Manja set the early pace, passing the 3km mark in 8:32 with 20 runners hot on his heels. As they approached the big descent past Ellis Park hill at the 4km mark, Thabang surged to the front and broke the leading group up, with only Stephen and Lucky Mohale able to go with him.

The trio went through halfway in 14:49 before Stephen opened a 20m gap, but at 7km Thabang was back with him, and at the top of the Constitution Hill climb, with 2km to go, the youngster took control of the race. He went on the win in 29:51, with Stephen taking second 25 seconds later and Gladwin Mzazi coming through for third. Afterwards, he said, “This victory means a lot to me because this is not simply a win… I was working very hard to be in the top three, but I saw myself beating this strong man, Stephen, on the last hill before 8km. Jozi is a very difficult place to run in, and it has many hills, so for me to run 29:51 is a great achievement.”

Late Bloomer
What makes Thabang’s success at 22 all the more impressive is that he only discovered his running talent late in high school. “My coach, Spring Phakate, introduced me to athletics in 2011, and in 2012 in Rustenburg at the South African Schools Cross Country Championships, I got position two in the under-17 boys’ 6km,” says the Human Resource Development student, who clearly has his eyes fixed on still bigger achievements in running. “My long term goal is to bring home a medal for my country from the Olympic Games, and short term, well, I want to be fit and strong for any race, but I don’t just want to be strong, I want to be in the top three. On the track, I am focused on the 5000m, but my favourite race is the 10km on the road, and that is where I see myself dominating.”

In order to achieve that, the young man is hard at work in training with the rest of the Spring Training Group, as it is known, under coach Spring Phakate, and it helps that he is surrounded by serious racing pedigree to push him to new heights. The group includes FISU World Student Games Steeplechase champion Rantso Mokopane, Southern Region Half Marathon champion Joel Mmone, former South African junior 5000m champion Xaba Mavusa, and steeplechaser Dikotsi Lekopa, who was part of the SA team for the IAAF World Champs in 2015.

But striving towards success on and off the field, like his training partners, mans that Thabang enjoys a packed daily schedule. “There’s only hard work at training, and we do two sessions most days. In the morning I go for my early run and after that I am on my way to class. After class it’s training again, and if I do not have a session, I just watch athletics videos so that I can learn more.” Judging by his results this year, he’s clearly watching the right videos!