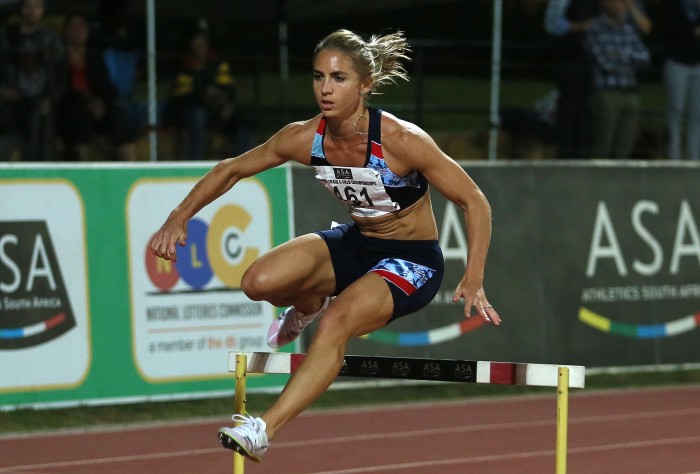 The weight of expectation can sometimes weigh heavily, they say, especially when you put that expectation on yourself, as 400m hurdles star Wenda Nel has realised over the last year. – BY SEAN FALCONER

The 31-year-old Pretoria flyer finished a long 2017 track season in September feeling the same mixture of satisfaction and disappointment that she has had since the Olympics last year in Rio. That feeling was compounded by her World Champs experience this year, but she says she will get over it soon – and that bodes well for her chances at next year’s Commonwealth Games in Australia.

Upward Trajectory
In 2015 Wenda ran a PB 54.37 in Beijing in May, then returned to the Chinese city in August for the World Champs and made her first global final, finishing seventh in 54.94. As a result, big things were expected of her in 2016 in Rio, especially after she won the gold medal in the African Champs in Durban with a 54.86 and had a great international season in Europe, with a season best of 54.47. However, at the Olympics she only got as far as the semi-final round, being eliminated after clocking 55.83.

“I walked away from Rio a bit disappointed. I was so focused and performance-driven, and really wanted to make the final, coming out of making the 2015 World Champs final, but I learnt so much. I think it brought me back to earth a bit, and made me realise it doesn’t just happen, that your focus, training, nutrition and sleeping pattern must all be on par to perform at the top meets. Therefore, at the beginning of this season I set specific goals, one of which was to make the final of the World Champs in London.”

Heartbreakingly Close
Once again, after a solid European season, including a season best of 54.58, Wenda went to the World Champs aiming to make the final, but once again she faced semi-final elimination. Sadly, her 55.70 was the tenth-fastest time of the round and thus she only just missed out on the final as one of the fastest semi-final losers – and that brought all the disappointment back again, but also more introspection and growth.

“To be honest, I am a bit disappointed with my 2017 season, because I didn’t make the final in London, but the more I analyse things, the more I realise it wasn’t all bad. I was competitive in the Diamond League and had some great races, but I just wasn’t consistent enough and struggled to get my timing just right. I tend to run a season best or a PB just before the big meets, but then can’t reproduce that at the major events. That is something I will be working on for the 2018 season… but Rio and London were still amazing experiences, especially Rio! It’s every athlete’s dream just to compete at the Olympics – but my goal had changed to compete in the final, not just compete, hence I felt disappointed.”

Talking Technicalities
Running the hurdles is an incredibly technical discipline, and Wenda says she is experimenting with her stride pattern to find the perfect mix that will eke out a vital second over 400 metres. “I have a race plan that I normally stick to, 16 strides to the first six hurdles, then 17 strides to the end, but I do experiment and change up the patterns. In my season best this year, I ran a race pattern I had not done before, because sometimes things happen in a race and you have to adapt. Now I am trying something new in preparation for next season, hoping to make myself sharper at the hurdles and allow for fewer strides.”

“I am shorter than many of the other hurdlers, so it’s not as easy to take longer and less strides between hurdles, but 15 strides are so much faster than 16, and my 16, especially later in the season, put me a little too ‘up’ on the hurdles, which means I need to brake a bit, then play catch-up. That’s why I want to change to 15 strides until hurdle three, then 16 to six, and 17 to the finish. I did that in 2015 and 2016 and it worked for me, but this time I may try it in the first race of the season instead of the third or fourth. Basically, I need to go faster to keep up for the first 200 metres, but without wasting energy.”

Looking ahead, Wenda says she is really excited about the 2018 season, given that the Commonwealth Games will be in April. “Normally we have SA Champs in April and we are working to peak then, so preparing for Australia will actually feel normal to us South Africans. I will also give the European circuit a go and will try to do a few Diamond Leagues again, plus we have African Champs, where I will hopefully qualify for Team Africa for the Continental Cup in the Czech Republic in September. So it will be another long season, but I’m looking forward to it!”