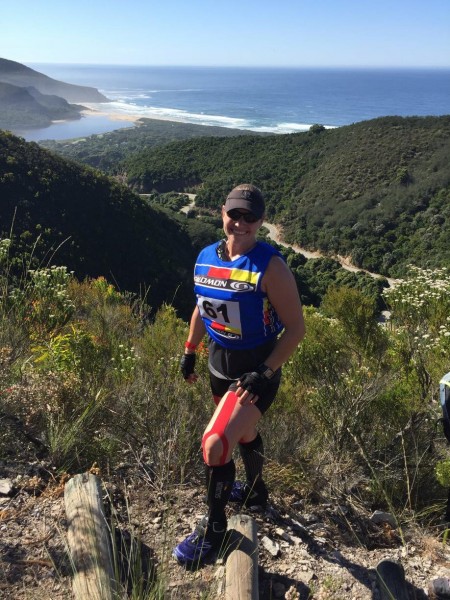 After two freak injuries, Samantha Schoeman is incredibly lucky not to be permanently paralysed, or to have lost a leg, but both times she fought back to fitness, and even took up trail running along the way… in spite of what the doctors said. – BY SEAN FALCONER

It’s probably a bit of an understatement to describe 36-year-old Sam Schoeman as accident-prone… In 2009, while on holiday in Herold’s Bay, she slipped off a cliff, fell about two stories and landed on her back on the rocks below, and was then washed into the sea by the waves. After 10 minutes of being pummelled against the rocks, her boyfriend spotted her, dived in and rescued her. “At the hospital they said my back was just bruised, but a week later I was still in pain, and when they rechecked my X-rays, they found I had broken the transverse process off my L4 vertebrae. That’s the little wing on the bone where the ligaments attach,” says Sam. “Thankfully, after six weeks, the orthopaedic surgeon back in Pretoria said the bone fragment looked to be sorting itself out, so no operation, but by all accounts, I could have been paralysed!”

Having recovered, Sam went back to one of her greatest passions, riding horses, until a second freak accident. While training a young horse in 2012, she fell off and fractured her patella, and the doctor that cleaned the injured knee apparently missed some dirt in the wound. “A week later I was in hospital with potentially fatal gas gangrene, systemic septicaemia and some of the worst pain I have ever experienced. I had to have an emergency knee op, followed four months later by another op, and not a day goes by that I don't thank my lucky stars that my leg didn't need amputation!

Back on her Feet
To rebuild the strength in her knee, Sam started walking, and before long she was regularly doing 5km, but she saw everybody around her running and wanted to join in. “I hadn’t done any running at school due to asthma, but now I started, bit by bit, and fortunately my knee and lungs held up. Soon I was hooked and absolutely loving it, and in 2014 I decided to challenge myself with some short trail races. Then a friend jokingly challenged me to do the Otter Trail Run marathon in 2015, so I said I would if I could get in, even though my longest run up to that point was just 10km! But then I got in, and thought oh hell, what now?”

So Sam, who is the younger sister of Olympic swimming gold medallist Roland, ran the Bastille 28km down in the Cape, followed by the Crazy Store Magaliesberg Challenge 35km, and duly lined up for the Otter Marathon, but once again things didn’t go to plan. “That year’s race is now known as the ‘Snotter-Otter,’ because it rained non-stop, and they pulled all of us backmarkers off the course at the first checkpoint, just 8km in, because the route was getting flooded. I was livid at the time, because the entry was not cheap, and I had prepared myself mentally for running on the rocky coast, due to my fall in 2009, but I do understand it was a huge responsibility for the organisers.”

“After Otter, I needed another knee op, because I had developed osteochondrosis, where the cartilage in the knee peels away, and before the op, the doctor warned me that I may not be able to run again. He added that even if the op went well, I would likely need a knee replacement in my 40s if I kept on running, but I told him I’m going to need a replacement anyway, so why stop doing something that I enjoy, and he said OK.”

No Holding Back
In the meantime, Sam started a new business, BabaGrub, which makes home-made meals for babies and toddlers, and she’s currently getting a new venture going, The Grub Hub, to make prepared meals for athletes. “I do everything myself – the cooking, packaging and delivery – and I’m hoping to bring in a partner soon to grow it.” Earlier this year she also returned to running after more than a year out of action, but experienced chronic pain when she increased her mileage. “The physio said my muscles and joints were seizing up because my stabilising muscles had atrophied, so I am still busy with a rehab programme, because I want to get back to running crazy races.”

“Next year I really want to do the Isimangaliso Trail in St Lucia on the KZN North Coast, and hopefully in 2019 I will go back and avenge my Otter run, because it’s the only race I have not finished! But I am just grateful to have my leg, to be relatively pain-free, and to be able to run and do things the doctors told me I would never be able to do! Whatever the future holds, I know that I am so much stronger than I ever thought I was.”