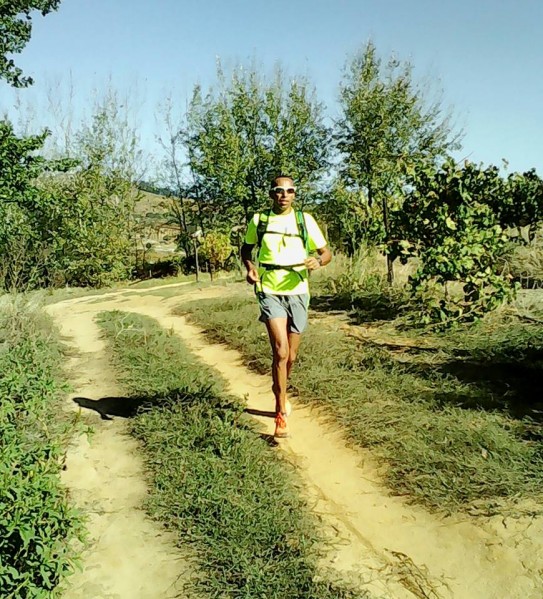 Having achieved success in trail running himself, Barry Goliath is now coaching the next generation to podium positions as well. As he tells the youngsters in his training group, “Do as I say, and as I do.” – BY PJ MOSES

As a 12-year-old, watching sport on TV in his family’s Koelenhof home on the outskirts of Stellenbosch, young Barry Goliath saw his future quite clearly. “Other kids wanted to be the star player on the team, but I wanted to be the coach. I wanted to teach my friends what I saw on television.” All these years later, Barry (44) is not only a highly acclaimed running coach and personal trainer, with a solid track record of bringing many youngsters into the sport and helping them earn podium positions, but he also has his own list of achievements in road running, trail running and multisport. And he still loves watching sport on TV. “Most days when I am not so busy, I spend my time at home with family and friends, watching and chatting about all kinds of sport. A nice day of sport and braai… then I’m a happy man.”

Barry’s transition to running as his main focus came at the turn of the century, when he took up running and soon began helping with the coaching at the Cape Town branch of the Harmony Athletics Club. He later moved to Transnet AC, then Easterns Kraaifontein AC, and is currently at Atlantic Triathlon Club (ATC). Along the way, he’s posted some outstanding results, with one of the most memorable being winning the Western Province 100km Champs title in 2010, to go with regular podium places in his age category in both cross country and road racing. “I love the longer distances, especially because of the test you have to put yourself through. Many times during those races you will be close to giving up, but you need to push through. I love that,” says Barry.

Heading Off-road
In 2011, Barry says his next challenge literally jumped at him from the pages of a local newspaper. “I saw an article about a three-day trail race called AfricanX, and it looked very interesting. My immediate thought was maybe I can do this.” Joining his friend Piet Jacobs as Team Contego, they ran brilliantly to take a third place podium finish in the men’s category, and this was just the first of many more individual trail podiums for Barry, especially in the Spur Cape Trail Series events. “I won the men’s veteran category at the Spur series back-to-back in 2013 and 2014, but then injuries and a busy life stalled my progress as a runner, and I also put most of my focus into my coaching,” he says.

Barry has now coached at all the clubs he’s run for, but it was at ATC that he found a kindred spirit in Liné Griffiths, and she’s been behind his Goliath Running Project coaching initiative since day one. “I have 33 runners in my current group, and I focus mostly on the junior athletes, but I have runners of all ages. ATC and Liné have been great in setting it all up and assisting me with all I need to make the runners the best they can be.”

All his juniors are from the surrounding Kraaifontein area, like Bernadino Heights, where Barry also helps train the local high school athletics team. It’s a community plagued by crime, and people struggling to make a living. “I remember once at a race that one of my junior runners didn’t have shoes. He was barefoot on a cold day, and still he was running in sixth position about halfway through the race. I was helping to marshal and he stopped where I was, complaining that his feet were sore, so I gave him my shoes and told him to keep going. He finished in eighth place, while I marshalled barefoot with very cold feet, but the joy on his face was worth it! I want to show these youngsters that running could be an escape for them, a career that gives you options.”

Doing the Hard Yards
Having been a competitive runner himself, Barry knows that success does not come overnight and he is honest about this with his young charges, and their parents. He wants them to have the discipline to keep chasing that dream, using past and current star runners as a motivating tool for the others in the group. “I have had success in the past with runners like Riaan Wildskut, who is a top young trail runner. He has since moved on to other coaches, but I still keep an eye on his progress.”

“My current group includes Daniel Arendse, who is going to be a major star in the future. He adapts well to any challenge I put in front of him, and especially loves trail, where he has been extremely successful in the Spur Trail Series and the Dirtopia trail races. He has a natural feel for running. He wasn’t the fastest runner when we first met in 2012, and usually finished closer to the back than the front, but I saw something in him and I knew he could do much better.”

The important thing for Barry is to talk to his athletes and find out what is going on in their lives, so that he can help build their character as well as their physical strengths. “The reason we do well as a group at trail running is that they know what I want from them, and they know what I believe they are capable of. When we go to trail races, we do not go there to take selfies, but to take podiums.” He is also currently organising and self-funding training camps for his young athletes. “I’m working on doing two camps with them before the end of the year, one in Piketberg and the other in Ceres. I want to get them out of the city so that they can focus on training and having fun.”

Bringing it Home
Barry doesn’t just expect hard work from his runners but puts in the hard work himself, and says he wants to get back to the form that made him a champion. “I need to lose my stomach if I want to stand on those podiums again… but my wife’s food is so good that I’m getting a little fat.” Yolanda, who is also a runner, has been his biggest supporter during their nine years of marriage, and he says she provides the stability and support at home that he needs to make sure his busy life does not get too much for him. “To get some perspective and balance back in our lives we like taking weekend trips to rural dorpies. Life is at a much better pace there,” says Barry.

Also, being part of a triathlon-focused club like ATC has planted another seed in Barry’s head. “I’m part of a triathlon club, so it is just natural for me to think that way. I’ve done a couple of duathlons and I am currently working hard on my swimming, so I am hoping to do my first triathlon soon, and after that I think Ironman will certainly be calling. It is exciting to try new things and test myself in different ways.”