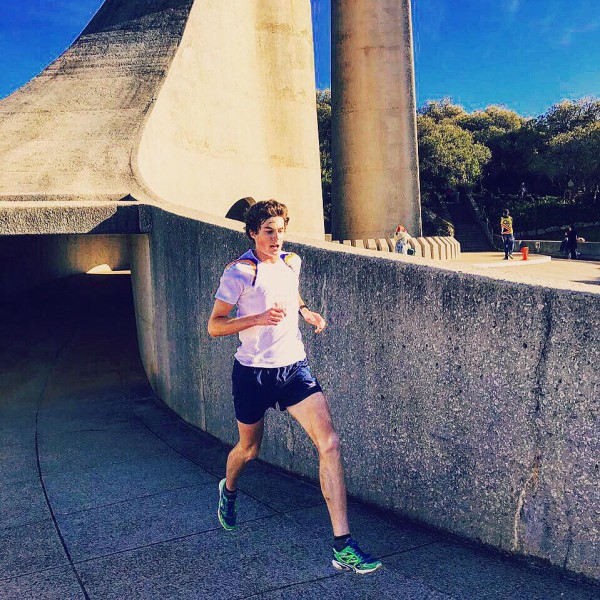 He’s just 20 and currently focusing on his studies, but Nicholas Quenet is already considered a star of South African triathlon, and it appears to be just a matter of time before this young man starts making a real name for himself on the world tri stage. – BY TRACEY FALCONER, WITH SEAN FALCONER

Clanwilliam obviously agrees with Nick Quenet. The 20-year-old Maties student has driven the 230-odd kays from Stellenbosch to the small northern Cape Town to participate in the Freshpak Fitness Festival triathlon the last four years, and every time he has come back with a podium position. In 2014 he finished fourth overall and first junior, then came home second overall in 2015, while his older sister Alexandra won the women’s race that year. Last year he went one better and took the men’s title, which he successfully defended this year, coming out of the water first and maintaining his lead through the bike leg, then blitzing the run for a dominant win. However, he admits he didn’t expect to win, and really thought the chasing pack would catch him on the bike leg. “Winning again was a surprise, because with my studies getting busier, I don’t have a huge amount of saddle training time available,” he says.

Currently in his second year at Stellenbosch University, studying towards a Bachelor of Accounting degree, Nick has made the decision to focus on his studies. When asked if he would consider putting his studies on the backburner, or even on hold, if offered a pro racing contract or more opportunities to compete overseas, Nick says that will have to wait. “I have thought about that, but I’ll stick to my degree! I’m definitely a numbers man and I don’t think one can operate in this country without a degree, so my aims are to get my degree and then do an Honours here at Maties, and then try to take triathlon to the next level.”

In fact, he already turned down an offer last year to race in Europe, but having just started his studies, says he couldn’t go. “It was sad to turn the offer down, but while I’m studying, I’m biding my time and focusing on the individual aspects of triathlon, doing running and biking races, and swimming galas, so I’m stronger when I graduate. Then I hope to base myself in Europe in the hopes of getting a contract with one of the French teams and race the grand prix’s. I’ve put my mind to it to work for four years – after that I can do what I want, and hopefully by then the triathlon doors will be open.”

Great Sporting Genes
Nick grew up in Worcester, where his family owns a pharmacy. Both he and Alexandra showed huge sporting talent in primary school, so when Nick was in Grade 8, the family moved temporarily to Stellenbosch, so that the kids could benefit from the more established school sports structures on offer in the town. “We lived here with my mom while we were in school, and my dad commuted regularly, but they are now both back in Worcester, while my sister and I still live here while we’re studying,” says Nick.

While at school, Nick focused on competitive swimming, while Alexandra focused on running, but about three years ago they both changed to triathlon. That was no surprise, really, given that their father was an elite triathlete in his younger days, racing in France in the early 80s and only just missing out on the World Champs in 1986 after falling off his bike and breaking his collarbone. “He later took up running, doing the Two Oceans Marathon, and is still doing trail runs, but these days it’s more about ticking things off his bucket list,” says Nick. “He really wants to go run the Ultra Trail du Mont Blanc in France.”

Of course, Nick’s swimming ability often gives him an upper hand in triathlon events. “I have the advantage of being able to lead from the start, and countless hours in the pool is now paying dividends, especially as there is so much technique involved in swimming. It’s an advantage not to have to learn how to swim, so I can just maintain my strongest discipline. I also did biathlon in school, so my running was already quite strong, but cycling was completely new to me. Still, I’ve achieved massive growth in a short space of time and am getting stronger, even though the training takes the longest, and I’ve also worked hard on my running this season. I did my first road running race at the Sanlam Cape Town 10km and clocked 31:40. I am pleased with my time, but still want to go faster, because if you look at the results on the world triathlon circuit, I believe it all comes down to the run, with the fastest racers all winning the foot race.”

Making His Name
While Nick is very understated about his success in triathlon, a quick look at his track record shows why he is already considered a star in the sport. In 2015 he won the Junior title at the SA Champs in Buffalo City, then added the African Champs junior title in Egypt a few months later. In 2016, he was second junior at the African Champs, then added a sixth place and an eighth place in ETU Junior European Cup events in Hungary and the Netherlands, but things didn’t go as well at the 2016 World Triathlon Grand Final in Mexico. “I got a bit of heat stroke due to the 100% humidity and did not finish the event, but getting to the World Champs is still one of the highlights of my tri career so far.”

Nick’s great results have also seen him pick up a few endorsement and product sponsorships, including one from Skechers shoes, and that, in turn, saw him get invited to Los Angeles earlier this year for the LA Marathon, which is sponsored by Skechers. “It was such an incredible experience! I actually started with the elite guys at the front, but stopped at the halfway mark, as planned, to avoid overdoing things at such a young age. But it was only once I stopped and saw 35,000 people coming past that I realised just how many people there were in the race! My dad ran the full marathon and we got to make a holiday out of the trip, including seeing the incredible Golden Gate Bridge. It was all just absolutely amazing.”

Future Goals
While his academics are his priority at the moment, Nick says he still makes time for some racing, with the Clanwilliam weekend being a must-do, as well as the Slanghoek Triathlon in November near his hometown, Worcester. “The races continue, so I do the academic work throughout the year to take the pressure of at the end of the year, and then it’s down to our holiday house in Hermanus to relax. It’s a brilliant place to keep training!” Then, looking ahead, he says he has a few goals for 2018 that he wants to chase down.

“If the SA Tri Champs are at sea level, I might have a crack at the Under-23 title, and then hopefully get to African Champs as well. Everyone says third year in my course gets harder, so I’ll have to see about Europe, if the opportunity comes up, and I’d also like to go after a 30-minute 10km, bring down my time for swimming 1.5km, and do a few cycling and track races.” Beyond that, he says his main aim will be the 2019 World Champs, and at the back of his mind are the 2022 Commonwealth Games. “I’ll see how those pan out and then plan the rest.”