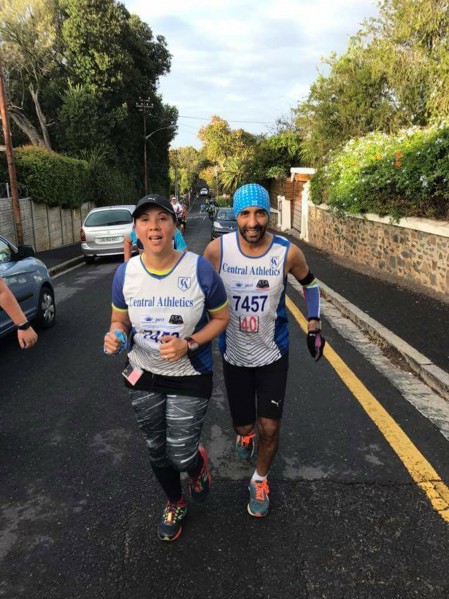 Some 23 years ago, Youssef Kanouni followed his running dreams from Morocco’s northern mountainous region to the foot of Cape Town’s Table Mountain. The quiet man with an iron resolve not only fell in love with the Rainbow Nation and decided to stay, but also found true love here. – BY PJ MOSES

Elana Meyer’s silver medal in the 10,000m final at the 1992 Barcelona Olympics had the whole of South Africa cheering, but it also inspired a young man watching in Casablanca, Morocco. “I came to South Africa as a 21-year-old in 1994 to further my running, because Elana’s medal-winning run in Barcelona inspired me and made me look at South Africa with different eyes,” says Youssef.

He arrived in Cape Town with an impressive running CV, having been part of a golden generation of emerging young Moroccan runners that saw him training alongside Hicham El Guerrouj, who would go on to win two Olympic gold medals and still holds the 1500m World Record. “We trained at the same camp and were from an identical background with a similar upbringing. He showed us what was possible with hard work,” says Youssef. “I was a good school athlete and competed at the Moroccan National Champs. I ran middle distance on track and also ran cross country, winning many races.” Another close running friend was Khalid Khannouchi, who later broke the Marathon World Record twice.

Running Activist
Raised in a devout Muslim family by parents he adored, Youssef was taught to always do his best in life, and as much good as he can. This philosophy still affects everything he does today: A family man and activist, he splits his time between his training and working on various projects in the poorer communities. He’s a police reservist, an activist for low-cost housing, and a charity runner for the Palestinian Children’s Relief Fund (PCRF). He says he is a firm believer that sport can change the lives of young people and that they can be so much more than their circumstances allow them to be. “I want to teach them that if you can’t do it with a book, you can do it with your legs. The power of a nation comes from its youth, so if we look after the youth, we will have a stronger nation.”

On the road, Youssef boasts a marathon PB of 2:36, and he also took on the big ultras a few years after arriving in SA, with a best of 4:18:42 at the Old Mutual Two Oceans Marathon in 1997 and a 7:56:03 at Comrades in 2001 amongst his early highlights. However, he lost the passion for the sport later in 2001 when his mother passed away, and it took him 10 years to rediscover that fire in his belly. That happened in 2011 when he saw some old friends training around Rondebosch Common, and all the old instincts kicked in again. “When I came back I was a little chubby, so I had to do a lot of training to get back to who I was.”

His comeback was greatly helped by finding love on the road with fellow runner Mushfiqah, and they were married six months after meeting at a race. Youssef says their shared active lifestyle has been a blessing for both of them. “She has been my rock, and I think I have been an inspiration to her. I helped to coach her to her first marathon finish, and it took her just two months to go from the half marathon to the full.”

On the Comeback
Having regained his fitness, Youssef posted a brilliant 4:01 in the 2012 Two Oceans, and 4:02 in 2013, just missing out on a coveted silver medal. In 2012, he also set a Comrades PB of 7:22:22, and more highlights were to follow. “One of my proudest moments came at the 2015 Western Province 100km Championships, where I finished in second place.” However, he does not just run for himself: Youssef recently joined the Western Province Pacesetters and loves helping others achieve their running goals. “I always speak to my passengers, because I want them to feel happy in my bus. They must know it is going to take hard work to achieve their goals, but that I will help them to do it – and I always let them cross the line in front of me, because it is not about me.”

Looking ahead, Youssef says his next big goal lies overseas. “I am going to run the Istanbul Marathon in November, but that is just a step toward my ultimate goal of winning the Palestine Marathon.” He also wants to get his Comrades permanent number, needing just two more finishes, but this has unfortunately been put on hold because the 2018 race date falls within the Muslim holy month of Ramadaan for the next few years. A plea by Muslim runners to move the race date has been unsuccessful, but he remains hopeful. “We hope that when the 2019 race comes along, the powers that be will have a heart and move the race to a date that will accommodate Muslim runners. For now, all I can do is train hard and be ready.”