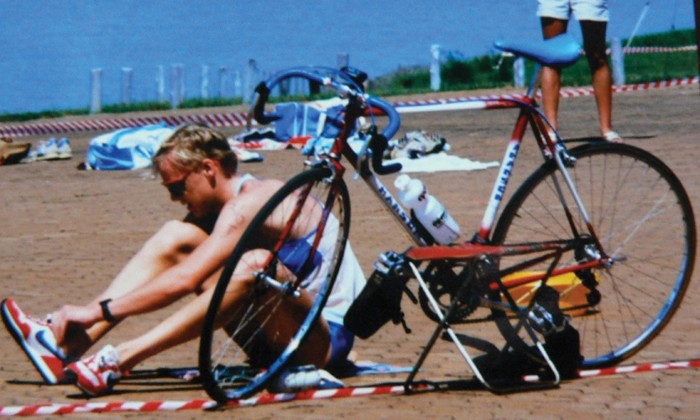 Some elite athletes enjoy a relatively short career at the top level, but others seem to go on forever, even seeming to getting better with age, like multisport legend Donovan van Gelder, who can still give the youngsters a run for their money after 30-plus years of top level competition. – BY SEAN FALCONER

If Donovan van Gelder ever finds out what keeps him training and competing at the highest level in multisport well into his 40s, he should bottle it and sell it. He’d make a fortune! Inevitably, he gets asked all the time what his secret is. “It’s no secret, really, just hard work. I love the training, and I am generally quite a solitary individual, which lends itself to training for the sports that I take part in. I think another big factor is that all these years of training build up in the body, and I am stronger as a result of the miles I have covered, so as long as the motivation is there, I’ll keep going as fast as I can. Mainly because I have OCD – obsessive competitive disorder!”

Ironically, given that his main line of business these days is coaching other athletes through his CyberCoach website (as well as being National Brand Manager for Innovate running shoes), he says he thinks he underperformed as a youngster, because he was ‘uncoachable’ back then. “In the 80’s, nobody really knew how to mix the three disciplines for triathlon, so we were just winging it, but I’m opinionated and stubborn, so I didn’t train as well as I do now. Luckily, I’ve done many coaching courses and learnt from experience, and training knowledge has improved, but that said, while I definitely think I could have performed better in my 20s, I did put less wear and tear on my body, hence I am still performing now at 46.

SUITED TO MULTISPORT
Donovan has spent most of his life in the Durban area, and today actually lives with his wife Estelle and six-year-old daughter Audrey just one kilometre away from where he grew up in Waterfall, near Hillcrest. While attending Hillcrest High School, he earned provincial colours in club soccer, ran cross country, and also played a bit of rugby and cricket, but says he enjoyed swimming the most. Then in 1986 he did his first triathlon, and the proverbial bug bit…

“I was told by the PE teacher about a tri event at Kloof High School, so I entered, along with a really good mate, Wayne. He was better than me at swimming and athletics, so no surprise that he beat me in the swim, but after I caught him on the bike, I thought he would beat me again in the run, but I ran away from him instead. That’s when I realised I can run well off the bike, and over the years I have often run closer to my PBs in tri events than in straight road runs. I think something in my physiology is suited to multi-discipline events.”

After school, Donovan was called up for military service and posted to the Army’s Infantry School in Phalaborwa, but just before he was due to leave, he happened to speak to Dave Sinclair of the Natal Triathlon Association, who used his connections to arrange for Donovan to go to Voortrekkerhoogte in Pretoria instead, where all the top sportsmen in the army went. “Who knows where I would be today if not for Dave, because I would not have been able to train for triathlon in Phalaborwa! I did my six months of Basics in Pretoria, plus training as a medic, and then I was posted back to Durban and stationed in the sick bay in the naval base. For the rest of my national service I was basically a professional athlete, with a flexible schedule that allowed me time for training and racing. The Army was therefore not a hardship for me.”

SUCCESSFUL CAREER
Back in civilian life, Donovan studied through UNISA to become a journalist, and still harbours dreams of writing novels some day, but it was in multisport that he made a name for himself. He won various national titles in triathlon and duathlon, and was in the first SA duathlon team to compete in the World Championships in the USA in 1991, but says he doesn’t remember his racing history accurately because he never really kept track. “I’m actually annoyed with myself for not keeping notes, as I’ve done a lot of racing after 31 years.” That included a few years as a pro triathlete in Holland and Belgium, and he also won silver and bronze medals at the SA Cycling Champs. “It still burns me a bit that I never got a stripey jersey for winning an SA title in cycling,” he admits.

Looking back on his long, illustrious career, Donovan says it is hard to single out highlights. “Every big race I’ve won was a big deal, but I think the half iron wins were my favourites, especially one of my first ones, where I ran the leaders down and only knew I was going to win with about a kay to go! Another event on Durban Beach stands out. As usual I was behind in the swim, but then I caught a monster wave that brought me in. I didn’t know I was in the lead, and in transition I still asked my dad how far I was behind the leaders! I can’t remember if I won that race, but remember having to think what to do, as normally I had to chase.”

NOT QUITE DONE YET
In August last year, Donovan decided at last to pack in his competitive tri career, after simply not enjoying the bike leg of the 5150 Bela Bela event. “I decided to just run and see what I can do, but I needed a goal, so I decided what about Comrades? The problem was that coming from triathlon, I wasn’t spending nearly as much time training, so I easily got up to 120 to 130km a week, and because I am a bit addicted to training, I overdid it. I sprained my ankle running in Kloof Gorge in January, which is the critical time for Comrades build-up, then favoured the other leg while trying to come back too quickly, and ended up tearing my calf.”

“So I did nothing for a while, and put on weight, because I’m Dutch and I like beer and cheese, and by April I weighed 77kg, the heaviest I’d ever been in my life. That got me back on my bike, doing hilly fat-burning workouts, and I found I was enjoying it again. Then I saw that the SA Duathlon Champs were just 10 weeks away and decided to give it a go if I can get in shape. I finished second in my age category, thanks to 30 years of training in my body that allowed me to bounce back so quickly. Not bad for an old codger! However, my days of racing as a pro are done, and I’m just going to race as an age-grouper, but I will still be racing to win, and I’m not going to make it easy for the lighties, because I consider it my responsibility to make them achieve what they can!”