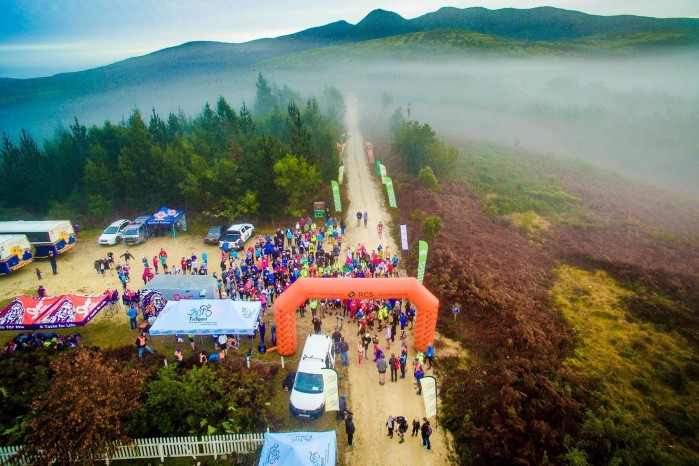 Multi-stage trail running events continue to grow in popularity throughout South Africa, but understandably, they are usually substantially more expensive than single-day running events, as the entry fee often covers accommodation, meals and transport. This means there are some runners who simply cannot afford these races, but thanks to sponsors like RCS Group, a few trail newcomers got to enjoy the spectacular beauty of the recent RCS SOX three-day trail run in the Garden Route area of the Southern Cape. – BY SEAN FALCONER

With a CEO who is an avid runner and has completed the Old Mutual Two Oceans Ultra-marathon, and with many other runners amongst its staff, it comes as no surprise to see that financial services provider, the RCS Group, has thrown its support behind running in a big way. The group sponsors the three-day SOX event, and also sponsors the Gugulethu Athletics Club in Cape Town.

As CEO Regan Adams explains, “RCS has always had a strong connection with the running community, and we have a long-standing relationship with the Gugulethu Athletics Club, which encourages running in disadvantaged communities. We understand the importance of staying active and connecting with nature, and what better way to do this than with one of South Africa’s most beautiful trail runs? We were therefore pleased to invite some of our Gugs members to Knysna and expand their running experience. That’s what we’re about, making things possible for people.”

SIGNED UP TO RUN
That saw RCS sponsor the entries and race participation of Peter Tsawayo, Coceka Qomiyana, Nceba Mabulu and Imran Paya, all going in the team section, and Phumeza Bobotyane running as a solo entry. Imran and Peter were already experienced trail runners, with an impressive record of trail race wins or podium finishes. Imran (40) has been running for nine years and boasts best times of a 2:36 marathon and 6:36 for the Comrades. Meanwhile, Peter (36) has been running for 16 years, and has bests of 29 minutes for 10km and 1:07 for the half marathon. When asked what the RCS sponsorship meant for them, Imran says, “The sponsorship could have gone to someone else, but here I’m the one who was chosen to go. Words can’t justify how honoured and grateful I feel for that.”

On the other end of the experience spectrum, it was a first foray into trail running for Coceka (35) and Nceba (28). Coceka has been running for seven years and has done a 3:55 marathon, and she says running “gives me a special moment to talk to myself.” After two years of running, Nceba can look back on a marathon PB of 3:37 and openly admits to being addicted to running, “but it’s a healthy addiction that makes me feel strong. The thing I love best is that running has taught me that I can do things I never thought I could do!” They also expressed huge thanks for the RCS sponsorship: “I always wanted to participate in a big trail run, and RCS has made it possible for me,” says Nceba.

ENJOYING THE TRAILS
As regular contenders in both road and trail runs, it was no surprise to see Imran and Peter setting the pace on day one, and they led from start to finish in the 30km stage, completing it in two hours 45 minutes. With a healthy lead in the bag, they could take their foot off the pedal a bit on day two and conserve energy for the final day, so they took 2:50 for the next 30km – not that much slower, but running within themselves. They then led the entire 20km of stage three, coming home in 1:39 for an overall time of 7:14:15 for the 80km distance, and the 2017 SOX title.

“I was very happy with my second SOX stage race, because it was very well organised, from our travelling to our accommodation, and we did well, even though we got lost a bit along the way. We could have run faster, but since we were in the lead after the first day, we took it easy the other two days. We enjoyed the run so much because we had prepared and trained hard for the three days, and our sponsor, RCS, gave us everything so we could enjoy every moment,” says Peter.

A bit further back, Coceka and Nceba came home 14th team overall, and sixth in the mixed category, with a combined time of 10:21:38, having both thoroughly enjoyed their first trail experience, while Phumeza finished in 12:26:48. “I must say, it was a memorable experience,” says Nceba. “Running on three consecutive days of tough trails was not easy, and required good mental strength, but if given an opportunity, I’ll definitely run it again!” Echoing his thoughts, Coceka says, “Running SOX was an experience of a lifetime. I feel like a new person after going deep into those forests, crossing those rivers, and climbing those hills, and I am stronger than before. Thanks to RCS for giving me the opportunity to run this amazing event!”