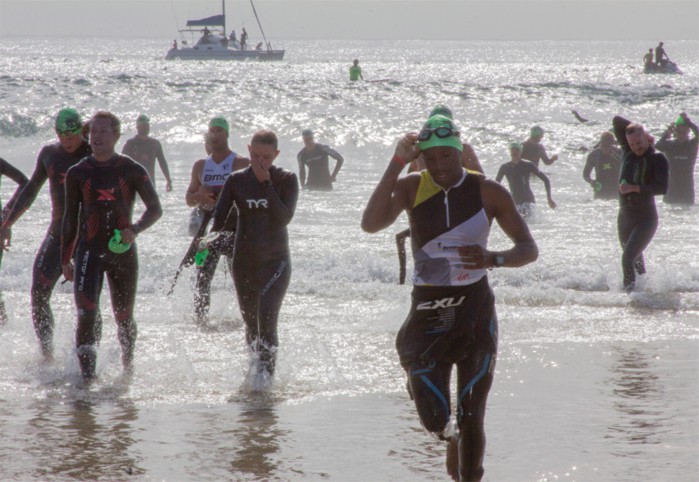 When 40-year-old Port Elizabeth triathlete Hanson Singaphi lines up for the Ironman World Champs in Hawaii on 14 October, it will be the culmination of an amazing 13-year journey in multisport that began with him learning to swim at age 27. – BY SEAN FALCONER

In October 2004, Hanson was working at the Virgin Active Gym in PE, taking care of the maintenance of the gym’s pool, when he saw Ironman South Africa race director Paul Wolff presenting swimming lessons and coaching triathletes at the gym. “I had always had a passion for sport, and had a strong background in running, so when Paul told me about the SA Triathlon Development team, I signed up to learn to swim,” says Hanson. “When I started I just wanted to challenge myself, because I like a challenge, so I took up triathlon, not knowing that one day I would land up in Hawaii! But I still get butterflies at the start of a race, even though I have now been doing this for years.”

It’s actually strange to hear this remarkable athlete speak of pre-race nerves, considering what he has already achieved. Born and raised in Walmer Township, one of the poorest areas of Port Elizabeth‚ Hanson began running in school, taking part in track athletics and cross country. After school he moved into road running and boasts impressive personal bests of 33:07 for 10km, 1:11 for the half marathon and a 2:56 marathon. However, swimming and cycling were complete unknowns until he began training with Paul, who also organised a job for him in sales at Triangle Sports, the retail arm of the Ironman operation.

Within a year of learning to swim Hanson was lining up for his first full Ironman at the African Champs in Port Elizabeth, ready to tackle a 3.8km open water ocean swim, which is normally the most daunting leg for athletes without a swimming background, as well as a 180km bike leg, followed by a full marathon. Even more surprising is that he says he actually found the sea swim easier than his training in the pool! “The distance was more challenging, but the swim was not as hard, because the salt water provides more flotation.”

IRONMAN PEDIGREE
Today, Hanson can look back on a remarkable Ironman record. He has started 11 Half Ironman events and completed nine, with a best finishing time of 5:20, and has completed eight out of eight full Ironman events, with a best of 12:06. He also earned Eastern Province colours, has competed at the SA Duathlon and SA Triathlon Champs a number of times, and was selected to represent his country in his age category at the 2007 World Duathlon Champs in Hungary.

That was the first time he travelled overseas, and now he is off to Hawaii for the biggest Ironman of them all, thanks to the support of Standard Bank, sponsors of the SA Ironman events. Naturally, Hanson is thrilled about the opportunity to race in Kona, as it is the number one bucket list event for most triathletes. “Paul told me after I finished the Ironman SA Champs this year that Standard Bank wanted to send me to Kona, covering all my expenses, including flights, accommodation, entry fee, even the visa fee. I am very excited. It’s a great feeling because it’s every athlete’s dream to do Kona, and I never thought that one day I would be going to the World Champs.”

In terms of his Kona race plans, Hanson says his focus will be more on the experience than the clock. “To me, Kona is about learning, meeting new people and learning different cultures, so the race is not about time, but more about finishing, because I’m going there as a novice. That’s the main thing, and to enjoy myself. It’s the World Champs, and I’m just so proud to be representing Walmer in Kona, because I am proud of the community that raised me. I wanted to do something different to inspire my community, and that’s why I am so proud that some of my friends in the community are now also doing triathlons.”

UP FOR THE CHALLENGE
Hanson says that triathlon has become more a lifestyle for him than just a sport. “I had always been a runner, but what inspired me to do triathlon is that it is a unique sport that challenges you every time you enter a competition. The most rewarding thing about triathlon is what it teaches you about yourself. You learn quickly about your strengths and weaknesses, and how self-discipline can benefit you as an athlete and as a person.”

Of course, given that he is inspiring so many others to also take up the sport, Hanson has some basic advice to pass on to any would-be triathletes. “My advice to people who are interested in the sport is that anything is possible – you just need to be dedicated. And you don’t need an expensive bike… If the wheels turn, that’s good enough.”