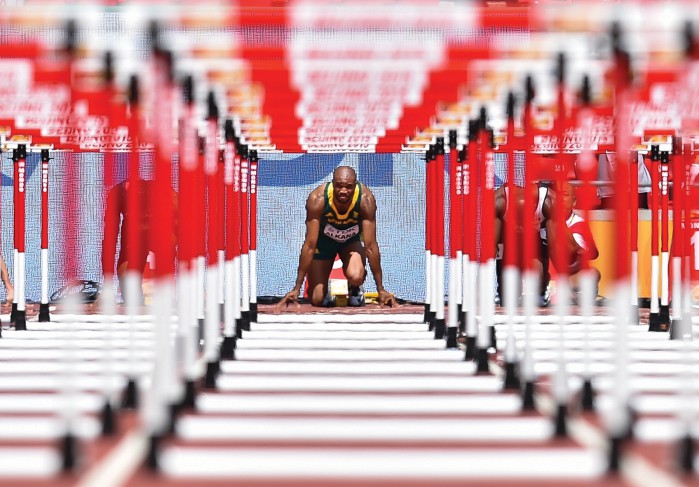 Eight years ago at the South African Youth and Junior Championships in Germiston, Antonio Alkana failed to progress to the semi-finals in his specialist 110m hurdles race. Naturally, he was bitterly disappointed… but fast forward to 2017 and he is now the African and SA Record Holder, a 2016 Rio Olympic Games semi-finalist, and recently got engaged. And he’s all smiles these days. – BY REGGIE HUFKIE

At the 11th African Games (formerly known as All-Africa Games) in Brazzaville in Congo in 2015, Antonio Alkana, or Tony as he is known to close friends, introduced himself to world hurdling when he snatched the gold medal in a personal best time of 13.32 seconds, winning his first major title, with a new Games record for good measure. Later that same year, he competed at the IAAF World Championships in Beijing, only just missing out on a spot in the semi-finals, but it was a clear indication that he was on the right track.

Then in May 2016, at the Diamond League Meeting in Rabat, Morocco, he clocked a 13.28, taking 0.04 seconds off his best, and only just missing Lehann Fourie’s African and SA Record by 0.04 seconds. A month later, at the 20th CAA African Championships in Durban, Antonio was once again in the spotlight as he flew over the hurdles to win the title in a new championship record of 13.43, and that led to one of his lifelong dreams coming true, being included in the 2016 Rio Olympic Games team.

In Rio, he went on to make it to the semi-final round, but his 13.55 on the day was only good enough for seventh position in his heat, thus bringing his Olympic journey to an early end, but having picked up invaluable experience of racing at the highest level. “I went into the Olympic Games with a time that could have put me into the final, but in competition it just didn’t work,” he says. “I didn’t perform as well as I would have liked, but I have been a bit inconsistent, so the main goal is to be more consistent, and that experience will help me going forward. But most important is that I really enjoyed the experience of going up against the best in the world in Rio, and look forward to doing it again.”

Attitude of Success
Antonio (27) attributes his success to the work he has done with coach Marcel Otto at the Bellville Athletics Club in Cape Town. “My coach and I worked hard to get where I am now. We worked on speed for a few years, and then focused on technique, but there is still room for improvement,” says Antonio, adding that he is confident that the great athlete-coach relationship he and Marcel have is still going to bring them both great success. “Training is a lot of hard work, but I have the hunger to improve every year, even if it’s just 0.01 seconds. It’s still an improvement, and I trust my coach and his guidance to get me there.”

That confidence took a small knock in April this year at the SA Championships, when Tiaan Smit snatched the national title from Tony in Potchefstroom, but Tiaan was subsequently found to have used a banned substance and was banned for four years. Meanwhile, Antonio bounced back from that disappointment more determined than ever to do well, and that saw him finally surpass Lehann’s African and SA Record at the European Classic Permit Meeting in Prague, Czech Republic in May, replacing the old mark of 13.24 with his massively improved 13.11. “To be honest, it didn’t come as a surprise at all. I could feel it in the warm-up, and I had been running times like that in training, so I just had to perform on the day. My coach had told me I was going to be the one to break the record, and in training you could see I was a lot stronger than last year, so we knew it would come this year.”

After that it was time for the IAAF World Championships in August, and Antonio went to London boosted in confidence by his new record. He once again made it to the semi-final round, but fell short by 0.36 seconds, clocking 13.59 when he needed a 13.23 to progress to the final. Nevertheless, it was still one of his best major championship performances, and he says just makes him want to chase further success on the track. “My long-term goal is to work towards podium finishes and medals at the Commonwealth Games, World Championships and Olympics. That would be amazing, and it won’t come easy, but with hard work, belief and trust, I think it can happen.”

More to Come…
Antonio’s sporting journey started in humble beginnings at Silversands Primary School and Malibu High School in Blue Downs, a suburb on the Cape Flats. His breakthrough came at the South African High School Championships in Rustenburg when he was in Matric – he finished fourth in that race, but says it boosted his confidence massively and laid the groundwork for greater things in his career. Another important factor in his success is the ongoing support of his parents Edward and Gail, who attend most of his races when finances allow, but otherwise sit nervously glued to their TV set when he is racing.

“I grew up in Brentwood Park in Blue Downs, and I’m still living there with my parents. Our community was quite small and almost everyone knows each other, so I had a good, fun and peaceful upbringing,” says Tony. He recently became engaged to long-time girlfriend Bronwin Houston, with whom he has a son, Logan, and he says he couldn’t do what he does without her love and support. “She supports my passion for the sport, and that means a lot, because I enjoy what I’m doing.”

All in all, Antonio has come a long way from that disappointed youngster in Germiston who had been eliminated in the preliminary heats at nationals, but instead of giving up, he opted to work harder, and that recently paid off with a new sponsorship from Nike. But there is no time for resting on laurels, he says. “I can always look back at my races, see what I did wrong, and work on how to perfect it, then get better. I just want to make it into the final of a major competition and whatever happens, happens, because it is so unpredictable in a final, and anything can happen in a technical race like the 110m hurdles.”