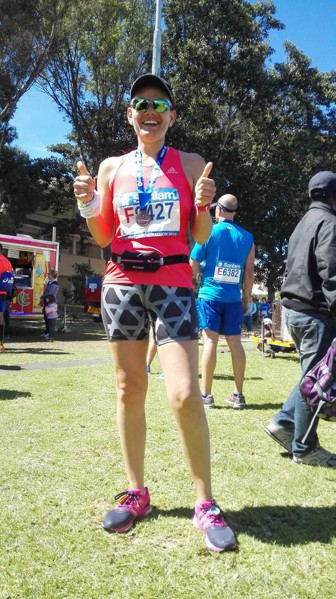 Some people see running and being active as a chore, but Lisa Ogilvie is not one of them. She sees it as a way of showing gratitude for the second chance at life that she feels she has been given. – BY PJ MOSES

When Lisa headed to Nigeria in mid-2014 to visit her husband Dean, where he was working at the time, she had no idea the trip would turn her life upside down. While there she was bitten by a mosquito and contracted cerebral malaria, which in many cases leads to death. Soon after returning to South Africa, she began showing symptoms as the sickness took hold and her mother decided to take her to hospital. Fortunately the doctor in the emergency unit recognised the signs of malaria and asked Lisa if she had recently travelled, but by then the illness was well advanced. The doctors tried everything, but began losing hope that she would pull through.

“My Mom had to make the toughest call of her life by letting my husband know that he had to come home, because it didn’t look good,” recalls Lisa. When he arrived, the doctors told the family there was nothing more they could do for Lisa, and it seemed only a miracle could save her now. “I believe this is where God intervened and made me well again. Many people prayed for my recovery, even when all hope seemed lost, and God heard their prayers and spared me. The doctors gave up on me and thought I would not survive. But I am still here, I am still alive. That’s why I am a miracle. I was part of his plan and my time was not finished yet.”

Bouncing Back
Nevertheless, Lisa’s recovery still took almost a year and a half, and took a superhuman effort on her part. “I had to learn everything again… how to walk, to drive and even how to just live again. Fortunately my family was very supportive and patient with me.” She also changed many of her old habits on the road to recovery. She became a vegetarian and now prefers juice to solid foods, and says, “I don’t even drink wine anymore, and to be honest, I don’t miss it at all.”

Another change to her daily routine was doing more strenuous exercise as soon as she was physically able – a big change from her previous lifestyle, where she used to love socialising with friends and not even thinking of a healthy approach. “I had started walking with my Mom because I thought I was a little overweight,” says Lisa, adding that evolving from a walker to a runner was less of an effort than she thought it would be. “I always dreamt of being a long distance runner when I was a little girl and now I am finally able to live that dream. It is amazing and I don’t take it for granted. I am happy. I’m healthy and I can run. I have my husband, my family and God, that is all I need.”

Now she lives every day to the full and finds happiness in the little things life has to offer, like walking her dogs or going for a run. “Running helped me so much. It helped me to deal with what I went through and now I can’t stop running. I get tears in my eyes when I run, I’m so happy.”

Running for a Cause
However, Lisa was not content with just changing her own life, she was determined to do good for others by running for a cause. “While recovering my health, I was motivated to run the half marathon at the Old Mutual Two Oceans in 2016. I couldn’t get an entry, so thought I would try to get a charity entry. Something about my story and the Non-profit organisation Cape Kidney Association just clicked, and I knew I wanted to run for them.”

That saw Lisa make contact with Molly Fabe at Cape Kidney, who was both touched and inspired by Lisa’s story. “Molly asked me to speak at their end-of-year event, and she has been very supportive of my journey, while I have been blessed by her presence.” In turn, Lisa has been able to raise funds for Cape Kidney by using her running as a way for people to get involved and to also create much needed awareness. “I was able to raise R20,000 at Two Oceans 2016, which was my first major race since getting my health back again.”

Having gone on to run the Sanlam Cape Town Marathon later in 2016, Lisa decided to join the Bellville Athletic Club in 2017, and specifically the legendary Wietse van der Westhuizen’s training group, in order to become a better, stronger runner. “Being with them has been so great for me. The training is good and intense. I like that. And the support and motivation from the other runners has also helped me a lot. I believe even more in myself now.”

Going Bigger in 2018
In 2017, Lisa once again ran the Two Oceans Half and the Sanlam Cape Town Marathon, amongst other races, all while continuing to raise funds for Cape Kidney, and looking ahead, she has already set her sights on bigger things. Not only is she hoping to run the 56km Old Mutual Two Oceans Marathon, but she has also secured an entry to the Paris Marathon next April. And she doesn’t seem too worried that Paris is only five days after Two Oceans. “I want to go to Paris and make a difference. I’ve got such a passion for my running and my charity, so I want people to join me on this amazing journey.”

She’s hoping her drive will help to raise R100,000 for Cape Kidney when she does Paris. “My motto is: Creating dreams by uplifting others. This has been my mantra as I go forward. I am smiling the whole time when out running because I feel so blessed to be here to do this.” She adds that it really helps having such great support. Besides Dean, her mom is her biggest supporter, going with to most of her races. “She comes to fetch me the morning of a race and then she stays there till I cross the finish line.”

Unsurprisingly, given the serious nature of her illness, Lisa has had to overcome a few health setbacks along the way that have prevented her from doing some of her other goal races, but she says she won’t be defeated that easily. “I’m a little fighter. I pick myself up and then I go again. I tell myself: ‘Sit jou voetjies in jou skoenkies en hardloop.’ (Put your feet in your shoes and go run. – Ed.) It helps me a lot to keep on moving forward, no matter what, because I believe that you must live your life to the full, because you can do anything that you want to. And please look after your kidneys!”