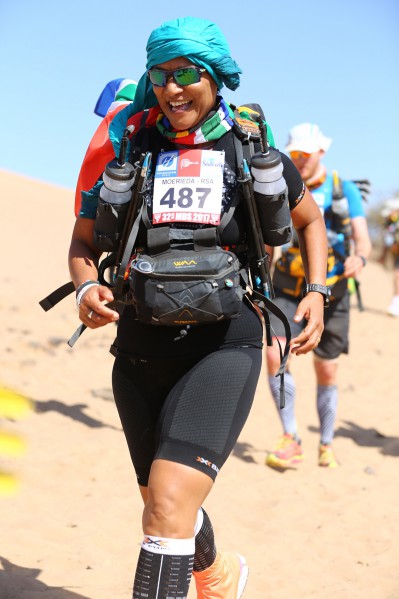 The Marathon Des Sables has been called “The Toughest Foot Race on Earth,” which is not surprising, given that it’s a 250km, six-stage race through the Sahara Desert in Morocco, with intense heat, grating sand, agonising blisters and incredible fatigue to contend with, and yet it was the number one bucket list item for Moerieda Mackay… even though she has never thought of herself a runner, let alone an ultra trail runner. – BY SEAN FALCONER

All it took was a photograph in a running magazine four years ago, of a man running in the Sahara Desert, to get Moerieda Mackay hooked on the idea of running the Marathon De Sables (MDS). She had never even been to a desert before, and says the hottest temperature she had experienced was 43 degrees in the Karoo, but somehow she became obsessed with running the event. “I was fascinated by his backpack and the intricacies of all his equipment, but it was the fact that he was carrying an anti-venom kit that really caught my attention! And yet the vision of me running the MDS stayed with me over the years. It was the craziest feeling, this burning desire to run 250km through the gruelling and inhospitable Sahara, carrying everything you would need to survive for seven days in the desert … but it’s like the desert was calling my name!”

Unsurprisingly, the journey just to get to the MDS in April this year proved a challenge for Moerieda, a mother of three from the Midrand area of Gauteng. She says that entering is hugely expensive and until 2016, South Africans had to go onto a three-year waiting list with the UK agent for the race to get an entry. “Luckily you can now enter directly, but once you’re entered, the challenging part lies in the training and preparation for the event, which includes sorting out your backpack, shoes, food and all your kit.”

“Once you arrive in the desert, funnily enough, the most challenging elements of the race are not the running or the heat, even though the highest recorded temperature was 54 degrees Celcius, but for me it was adjusting to life in the bivouac and sharing a tent with seven other mates! Luckily I was part of the Hope for Children group, running for the UK-based children’s charity, and we formed a great group. They say with a race like this your tent mates can either make it or break it for you. Mine were the best! The word self-sufficient took on a whole new meaning with the amount of sharing and caring shown by all of them.”

Another huge challenge for Moerieda was the logistics of the race. “If it was just running every day, the race would be fairly manageable, but with all the logistics it quickly becomes a lot trickier. It took me a good four days to get into my own rhythm, and I only really settled into the race on day three! But I guess the real big challenge of MDS is, of course, the sand! There is just no way of going faster than your fastest walk in the sand and blistering heat – unless of course you are a Moroccan or elite front runner – and as we hit sand dune after sand dune, I just kept saying to myself, Marathon of the Sands… this is your race!”

Latecomer to Running
By her own admission, Moerieda has no sporting background and zero athletic ability, so running is by far the most challenging thing she’s ever done, but she says it has put her on a path of physical, mental and spiritual transformation. “In 2010 I was trying to lose a few kilos and find that elusive work-life balance at the age of 40, because I’m a bit of a workaholic. And that first year I lost 22kg just training on the elliptical trainer and watching my diet. Meanwhile, my husband Adam had started running and he was having so much fun at the races on the weekends, so I started reading his running magazines and found interesting articles on how running has transformed people’s lives. Having lost so much weight, I was ready to push the boundaries, so I signed up for the 2011 Old Mutual Two Oceans Half Marathon in Cape Town, and that turned out to be a life-changing experience. I kept thinking, why did I not do this earlier. I was hooked!”

Today she says she has lost count of the races she has successfully tackled, including thee Comrades Marathons, which set her up well for the MDS challenge, but in October last year she fell and badly injured her ankle while training for the 100km Skyrun, and then she developed a mysterious blister problem. “I was even getting them on short runs and it frustrated the hell out of me. I now suspect it was the socks I was testing, but going into the race was a case of not ‘if I get blisters,’ but ‘when I get blisters,’ and I was ready for it! I even went to see a podiatrist and learnt to tape my feet, but as expected, I suffered blisters from day one at MDS!”

“Hell, it was painful, and every day there were more. Fortunately, the medical team at MDS are the best, and I think the dropout rate would be much higher at MDS if it wasn’t for Doc Trotters and his team. They took very good care of my feet. I remember on day two, after 39.1km in 50-plus degrees, my feet were so sore that my tears just started rolling in the medical tent. The doc looked at me with a smile and told me that I am a very strong woman. I cried even more after he said that, but felt strong when I walked out, ready to face day three! The blisters really affected me on the long day four stage, with its seven checkpoints. I had to stop at checkpoint four for over 30 minutes to attend to my feet, and again at checkpoint 5, as the blisters were killing me!”

Ultimate Runner’s High
While the blisters were one of the low points of Moerieda’s MDS experience, she says there were plenty of highlights as well. “My first surprise was race director Patrick Bauer and the whole MDS crew singing Happy Birthday to me at Quarzazate airport when I arrived. Another highlight was starting each stage to the tune of Highway to Hell, with helicopters flying low to film us. I always set off with my heart pounding, thinking this is it, I am actually running the MDS. Oh, and being surprised by the organisers with a can of ice cold Coke on day five! It’s the little things…”

“Surviving the decent of the last jebel on day two sticks in my memory. Legs deep in the sand making your way down the dune, it felt like skiing down a mountain slope in the Alps! All I could think of was, ‘What an adventure!’ And that after being in tears just two minutes before the decent, telling the organisers I didn’t think I could go down the jebel by myself! Another highlight was finishing day three feeling strong and very proud of myself, because day two was tough and had me at my lowest point, so finishing day three on a high was good for me from a mental and emotional perspective. I felt like I had ‘qualified’ for the 86.4km day four stage. In fact, for some weird reason, I felt like I had finally earned the right to be at the MDS!”

“I only have great memories of the MDS. I loved running in the desert. It is so beautiful out there, and I loved everything about the race, the organisation, the organisers, camp life, my tent mates, the routes… even the heat, and the six-hour bus ride from Quarzazate to the desert! The opportunity to be part of an event like the MDS, to run through the Sahara Desert, make new friends and to push your limits is priceless! The cut-offs at the MDS are very generous, so if you prepare well in the months before the event, you are almost guaranteed a successful MDS finish. And memories for a lifetime!”

Next on the Bucket List
After years of dreaming about MDS, Moerieda says she has struggled to get going again after coming back from the desert. “Some of my tent mates were doing 100km races within weeks of the MDS, but I feel I went into a kind of running depression, because I was thinking what next? Fortunately, I have found some answers to that question. I want to focus on building my new management consultancy business, but at the same time, running has brought me so much joy and opportunity, so I don’t want to let it go. And when it comes to running, the simple, easy races just don’t do it for me… so my next big thing will be the Tour de Geants, or Tour of Giants, in Italy in 2020.”

“It’s 330km with 24,000m of altitude gain, which is like climbing Everest three times, and you’re given 150 hours to finish, so I don’t know if I can do it, but I have to set myself a plan and then walk the motion, because I want to become a giant. That’s the goal for 2020, and along the way I want to run the 110km Lavaredo Ultra Trail in Italy in 2018, and I have put my name in the pot for the Ultra Trail du Mont Blanc in France in 2019. I believe that you must run with dreams in your heart and visions of doing something great, and that keeps me motivated. Thanks to MDS, I feel like I have achieved something great, and I hope it will inspire others.”