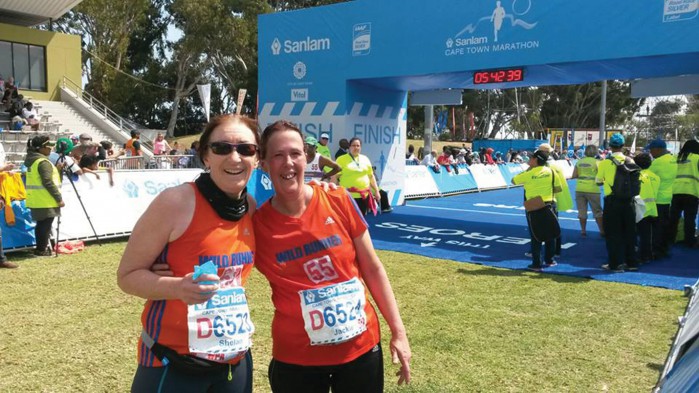 Adapting to a new medical condition this year has not stopped me from pursuing my passion for running. – BY JACKIE HENRICK

Running wasn’t always my passion, but eight years ago I put together a bucket list, and running the Old Mutual Two Oceans Half Marathon was right at the top. I had never run before, but after much training, I completed my first Two Oceans… eight seconds after the cut-off. Since then, I have come to love running, especially long distances, and in 2017, I decided the Peninsula Marathon would be a good way to start the year. I had an amazing run, and then to speed up recovery, I went for a sports massage. While working on my right calf, the physiotherapist remarked that she could feel some lumps under the skin and proceeded to try to massage them out.

I found the whole experience painful – more so than usual – so she recommended that I take an anti-inflammatory when I got home and not to run until the weekend. Later, she phoned to check on me and I mentioned I had a strange tightness behind my knee. Despite this, I still ran 16km that weekend, but by Sunday, the tightness had become worse and my leg was swollen. More anti-inflammatories later, neither the swelling nor the pain subsided, and it was time to see a doctor. After describing my symptoms, my GP wanted me to immediately book myself in for a Deep Vein Thrombosis (DVT) test. I was mortified. How can a fit person like me suddenly get DVT?

As I only have a hospital plan, and because I almost died when I heard how much a private hospital would charge, my first stop was Groote Schuur. I arrived for the ultrasound, but after sitting around for three hours, I was told that there was no-one available to operate the machine. To make matters worse, I wasn’t able to get an appointment at any of the other government hospitals, as there was either no one on duty qualified to perform the test, or the machines were broken!

Diagnosis Confirmed
A friend in the medical profession suggested I rather contact Dr Anderson, the vascular surgeon at Gatesville Clinic, who fitted me in, and confirmed I had DVT. Dr Anderson was even able to tell me more or less the age of the DVT and when it had flared up: It was all traced back to the sports massage. Often, enlarged veins are mistaken for lumps and when massaged, they can erupt.

My first question to him was, “Can I still run?” Thankfully, he said yes, but I would have to be careful. The constant hitting of the road could cause the blood to pool, which would make the leg heavy and feel “very full,” and if this happened, I would need to walk until the leg felt normal again.

I left the clinic in a daze. Here I was, fit and healthy, being told I would have to take medication every day for six months – and the Warfarin I was prescribed is not a nice pill to swallow. It is actually often referred to by doctors as Rattex, because it was initially used as rat poison! I was put on a strict diet: No leafy green vegetables and absolutely no vitamins K and C. Also, no anti-inflammatories, and I was prescribed special painkillers in case I needed them. I also had to cut my nails in case I scratched myself and started bleeding, and I was told that any bump would cause horrendous bruising. On the other hand, one thing that has definitely helped was getting a good pair of compression socks. I’m not talking about the kind you can just buy anywhere. The pair I got from the Orca/Orbea Concept Store is serious business. You need to be measured for them, and although they are pricey, they are the comfiest socks I’ve ever worn.

Getting on With Things
Since diagnosis, life has been a little different. I have lost some of my running speed, and I have started swimming to ease the leg while staying fit. I now have to wear an ICE bracelet in case anything happens to me, my life is governed by my cellphone alarm clock to remind me to take my ‘Rattex,’ and every two weeks I go for blood tests.

Despite all this, I still ran this year’s Two Oceans Half Marathon and was only 15 minutes off my personal best. The biggest concern was that I could have fallen – not a good idea when your blood is so thin – and I found that I was about 50 shades of purple from all the elbowing and pushing during the race! One lady even managed to cut my arm with her iPhone that was secured to her arm in a cover. Lethal things, those!

This is a journey I wouldn’t wish on anyone, and there are very few support groups for the condition within Cape Town, but with the help of Facebook, I have connected with people who are going through the same experience. I’m happy to say that my vascular surgeon is impressed that I have managed to carry on running, and that’s thanks to knowing my body and keeping myself safe.